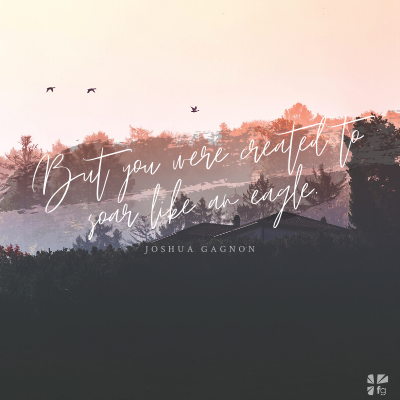 “Dad! Come here!” I heard my son Malachi’s voice, and he sounded excited. I’m glad somebody’s excited, I thought. I was not at all overjoyed to be at the Tampa Zoo in 105-degree weather with humidity, and was once again proving my love for my family while the sun beat down on our skin and threatened to fry us like eggs.

Jennifer and the boys were zigzagging from exhibit to exhibit, apparently oblivious to the heat, but in that moment the air-conditioning in my car was pushing hard for my attention.

“Dad, come on, quick!” my son’s voice called again, and this time he piqued my curiosity when he added, “There’s a bald eagle!”

Actually, as I trudged over to where he was standing, I saw two bald eagles, both relaxing in the sun. One was sitting high on a tree branch while the other had settled on a stump. There was no net covering the habitat, so I wondered what was keeping those two wild birds from taking off. Then I read the small sign next to the exhibit: “The birds in this exhibit have sustained permanent injuries in the wild and cannot fly.”

Of course, I thought. You guys don’t want to be here either.

Ten feet from those beautiful birds, I just stared. These were fierce and feared kings of the sky—symbols of strength even back in ancient times, and icons today for everything I love about my country.

Did you know that a bald eagle can spread its seven-foot wingspan and soar up to ten thousand feet in the sky? The next time you’re in an airplane, keep your window shade up during takeoff. Then, when the crew says, “We’ve reached ten thousand feet; you may now use your electronic devices,” take a look outside. You’ll see what an eagle sees. They soar through the sky at forty miles per hour, and they can spot their prey from over two miles away. And once it sees dinner, an eagle can nosedive for the kill at speeds up to one hundred miles per hour.

Eagles are at the top of the food chain for a reason!

In case you’re wondering, I didn’t know all of these eagle-related facts while l was standing there at ZooTampa — I looked them up later. But I did know that eagles were created to soar, not stand on a stump. And I couldn’t help but wonder how they felt. Do they miss the feeling of their beaks piercing the wind? Do they ever forget they’ve been injured and try to fly? Have they lost the desire to fly altogether? Do they stare at the sky all day and wonder, What if?

As I stood next to my son and watched those magnificent birds who had once ruled the skies, I couldn’t help thinking about the millions of people in this world who spend their lives waiting for a miracle — waiting for life to turn in the direction they always hoped it would go. Restaurants, schools, homes, and churches are filled with women and men who feel grounded by their pasts and live in a constant state of disappointment. These are people who genuinely want to end up somewhere different from where they are currently, yet they feel stuck. They’re in a holding pattern.

Please hear me on this: you are capable of pursuing your dreams. As human beings, we’ve been uniquely fashioned and lovingly crafted in the image of our God, the Creator of the universe. Each one of us is designed for greatness. Each one of us has been created to soar!

That raises the question: Why don’t we? Why do so many people settle for life on a stump? I think it’s because they believe they’re like those eagles, lacking the strength or the ability to soar. Maybe they used to believe they could fly, but no longer. Something happened that pulled them down to the ground, and now they don’t have the faith or confidence to fly again.

This is something we all have to deal with at different times in our lives. We encounter obstacles and lies that — if we allow them to — convince us that we’re unable to soar. These obstacles are like weights that tether us to the ground and cause us to surrender our dreams.

Want proof? Just look through the Bible and try to identify one of the people we often call “heroes” of the faith who hasn’t had to overcome obstacles on their journey to fulfill God’s calling. Peter surely felt like a pretty big failure when he denied Christ. John Mark’s missionary journey got so hard that he essentially quit on Paul and Barnabas midway through. Elijah literally ran away when King Ahab and Jezebel got mad at him (and that was after God had already done a bunch of amazing miracles through him, by the way). And the most important person of all, Jesus, was criticized, ignored, made fun of, attacked, arrested, beaten, and eventually murdered on the way to completing God’s purpose for His life and saving all humankind.

In fact, Jesus’ sacrificial death is exactly what Lent is all about. As you reflect on the seminal moment of all human history and prepare to celebrate the Resurrection, may you remember that God is asking you to chase your dreams and fight through the obstacles in your path. Because obstacles will come and roadblocks are normal, but you were created to soar like an eagle. Don’t relegate yourself to life on a stump.

Written for Devotionals Daily by Joshua Gagnon, author of It’s Not Over.

Are you soaring? You’re meant to! You were created to soar! Chase your dreams! Follow the path God set out for you and don’t get stumped! Come share your thoughts with us on our blog. We want to hear from you! ~ Devotionals Daily