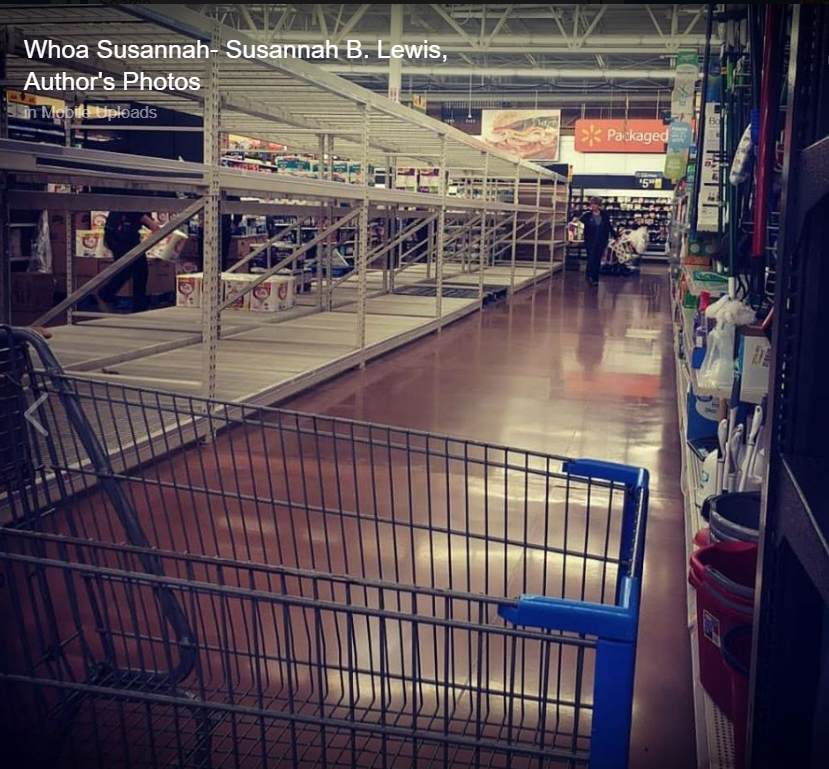 The kids are out of school until April and I needed the essentials. Yes, even toilet paper. But one package — not 18. Walmart had closed aisles and pushy patrons. I was ill as a hornet and overwhelmed and The Baby barely fit in my overflowing cart.

I illegally grabbed some paper towels from a closed aisle and went to check out. My cart was so full I was having to put bagged items on the floor and back in the cart that wasn’t even empty yet. I knew I was going to need another cart to hold everything — and another set of hands to push it to my car in the pouring rain.

And there he was — a man in his sixties got behind me in line as I frantically loaded the conveyor belt. He said, “Greater is He who is in me than he who is in the world.”

“Amen!” I said throwing corn dogs on the counter.

“Looks like you’re going to need another cart,” he said and nodded to his — his cart that only held one t-shirt.

Who needs a cart for one t-shirt!? It was like manna straight from Heaven.

I nearly cried right there. I needed a cart. I needed someone to push it. And despite my horrible attitude all morning, the Lord provided it.

I paid for my two carts of groceries and said, “I’m buying that t-shirt.”

I pushed the full cart to my car and he followed behind with the other one. The rain poured and the tired baby fussed as I strapped her into her seat and he loaded the things into my car.

“God calls us to be His disciples,” he said as he pushed cantaloupes and ice cream into every square inch of my cargo space.

We talked about the Lord and His goodness and before he walked away, he said,

“I’ll see you again. If not on this earth then in Heaven.”

Yes you will, good sir.

Shared with permission from Susannah Lewis, author of Can’t Make This Stuff Up.

“Greater is He who is in me than he who is in the world.” There’s no better time, friends, to love others with the love of Jesus than right now. In the middle of people being afraid of illness, quarantine, job security, food shortages, and even not having enough toilet paper, God is still good, we are still called to help and to love. Today, let’s look for people to help — the elderly, the infirm, first responders, anyone harassed by fear — and be Jesus to them! Come share your ideas with us on our blog! We want to hear from you! ~ Laurie McClure, Faith.Full