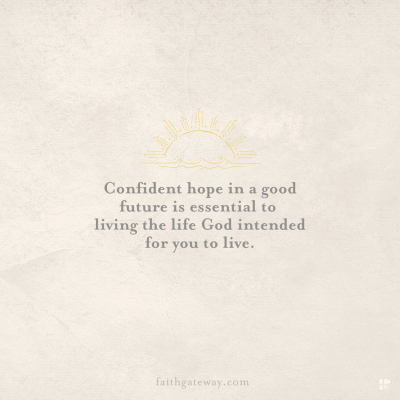 “For I know the plans I have for you,” declares the Lord, “plans to prosper you and not to harm you, plans to give you hope and a future.”

Your hope and future dictate how you live in the now.

I was in an important room for an important meeting with very important people. I was made aware of all this importance when we were instructed to go around and share resumés, proving why each of us deserved to be in the room. Of course, the leader of the meeting didn’t say it so bluntly, but it was obvious everyone understood the prompt based on their responses.

The guy to my right went first: “I worked at so-and-so-big-name-company for nineteen years and have done some pretty-big-named-things with even bigger-named-people.”

The lady to his right went next. (This meant that I would go last. Rats.) She let us know that she used to be a nobody but was recently promoted to a somebody.

Each introduction sounded more important than the previous. Finally, it was my turn. I kept racking my brain for something impressive. If it came down to credentials, I should have been the one serving these people the coffee. The irony here was that these people were gathered because they wanted to work with me on an important project. Oh goodness. They believed in me and had hope that we could do something profound together. So, I quietly asked the Lord what to do.

He gently reminded me of one story. That one? I asked Him. Are you sure? God nodded.

The circle of eyes looked at me, waiting for my introduction. And I said, “I went to jail once.”

Yep. Once upon a time, the double whammy of people-pleasing and shoplifting got me in trouble. Big trouble. I gave the room an abbreviated version of that story, ending my introduction with this truth:

When I put my hope in myself, my accomplishments, my importance, I find myself disappointed… or worse, behind bars.

I’d rather find my hope somewhere else. Or should I say, in Someone else. But friends, I don’t want to tell you in a cliché way to “Put your hope in the Lord” — I want you to know my story, warts and all. I too have tried to place my hope in myself, and I too have let myself down. I too have lived hopeless. Once you know that about me, I want to give you the good news. There is another option, one that will not disappoint. There’s a deep hope that’s real, that’s life-changing, that brings us a renewed sense of purpose.

What Is Hope, Really?

Jeremiah told us that God’s plans are not meant to harm but to give a hope and a future. God is not simply being redundant here. Hope and future are related but distinct from one another. Hope is a vision of the future given to you in the present. And future is, well, that future fully realized. And why is it important that God give us both? Why doesn’t He just give us a future? Well, because the future is no good to us in the present, but hope is. Hope sustains us here, in the middle of a dark present, by giving us a compelling vision of the future. As Helen Keller said, “Nothing can be done without hope.”1 Hope keeps us walking forward.

But what is hope? The biblical definition of hope is different than the colloquial definition. When you say something like, “I sure hope this happens” you frame hope as an uncertainty. Hope means that it sounds great, but it’s unlikely.

Biblical hope, on the other hand, is a certainty about something that has not happened yet.

We’re talking about fail-proof. To emphasize that, let’s take it back to the original language. The Hebrew word for hope is tikvah. It comes from the root qaveh, which means to tie or bind. The Hebrew word that means “rope” comes from this same root. The idea here is that hope is a rope that binds us to a solid object. This is what the writer of Hebrews is getting at in Hebrews 6:19, which says,

We have this hope as an anchor for the soul, firm and secure.

We know the end of the story, that the end is love and restoration and victory.

How you live now is determined by your hope of what is to come. If you hope you’ll go to college, during high school you’ll put in the work necessary to get there. If you hope that Gregory Alan Isakov is as good live as he is on a recording, you’ll buy tickets for the show. If you hope that she’s going to marry you, you’ll lay down some cash for a ring. Hope means concrete action.

Confident hope in a good future is essential to living the life God intended for you to live. And isn’t that what we want? To #liveyourbestlife?

If we limit ourselves to our flimsy definition of hope, you’ll be left with hoping for the Cubs to win the World Series or hoping you’ll make it to the gas station even though you’ve been driving with the empty light on for far too long. Both would be pretty fantastic, but you better not bet on them. Far too many people find themselves living in insecurity because their hope is unsure. They’re left waiting on “what ifs.” So many people are drowning in anxiety because they’re not practicing real hope.

He Had a Dream

Biblical hope offers the exact opposite of anxiety: a secure future. If our future is secure, we have a new perspective on and approach to the present. Instead of using the present to attempt to control an uncertain future, we are free to engage the present. Hope transforms the present. It engages each of our minutes with purpose.

You’re probably familiar with Dr. Martin Luther King Jr.’s “I Have a Dream” speech. Decades later, his words still compel us, still stir us, still call up hope in us — real hope, that is. Dr. King’s envisioned future was not flimsy. It wasn’t based on unwarranted hopes. While living in an uncertain and often violent present, Dr. King drew upon Kingdom promises for the future, feeding himself and his ministry on an assured vision of reconciliation, justice, mercy, and love. From that hope-filled foundation, Dr. King declared his dream of a future that could be possible if we lived lives that were shaped by that secure hope:

The book of Isaiah contains some of the most remarkable prophecies about Christ in the Old Testament. For example, Isaiah foretold the mission of John the Baptist, to prepare the way for the Lord and to “make straight in the desert a highway for our God” (Isaiah 40:3). He declared that

every valley shall be raised up, every mountain and hill made low; the rough ground shall become level, the rugged places a plain. And the glory of the Lord will be revealed. — Isaiah 40:4

Later in the chapter, Isaiah brings more hope to his readers. Even though people grow tired and weary, and they stumble and fall,

Those who hope in the Lord will renew their strength. They will soar on wings like eagles; they will run and not grow weary, they will walk and not be faint. — Isaiah 40:31

Hope, according to Isaiah, was not just a secure (and strong) future, it was security in a person — the Lord. Our hope is not simply rooted in a future but in a relationship. We can have hope because we know the character and power of the One who holds the future.

In his speech, Dr. King explicitly says, “This is our hope,” and then describes what comes to pass when we have hope in the Lord and not in circumstances: “With this faith we will be able to hew out of the mountain of despair a stone of hope.” Dr. King found hope in the promises and person of Christ. Notice though, Dr. King does talk about circumstances. His biblical hope (confidence in what will come) informs his hopes (desires for the future), which inform his actions in the present. Dr. King’s hopes and dreams, therefore, are not merely inspirational, they’re biblical. While hope may not immediately alter our circumstances, having hope alters us.

And with a biblical foundation of hope, Dr. Martin Luther King Jr. dreams:

There he goes again, referencing Scripture, Amos 5:24 this time:

Dr. King gets specific with what the future could look like when his secure hope breaks into his broken context. We can do the same. This is the power of hope.

God’s promise for reconciliation broke into Dr. King’s dreams, and the result was a specific picture of what was possible for tomorrow.

Do you have a dream? Don’t stop dreaming! Confident hope in a good future is essential to living the life God intended for you to live. Be confident in what Jesus Christ will not only do in the future but now, too, and let it also inform our actions now. We don’t have to be afraid. God’s promises are for us! Come share your thoughts! We want to hear from you. ~ Laurie McClure, Faith.Full