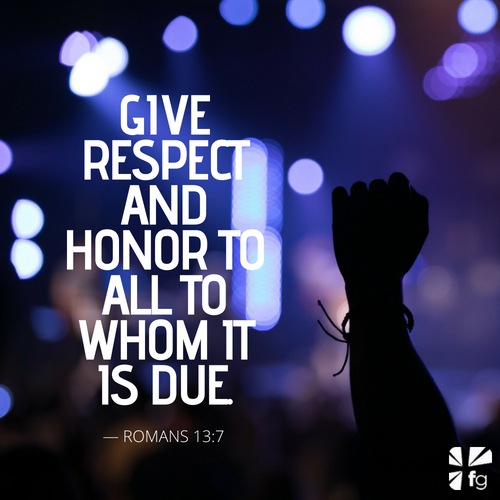 Many times God will send us what we need in a package we don’t want.

One primary reason God instructs us to give honor to the authorities over us is for our sake, not for theirs.

It is exciting to note that the adherence to this command from the Word of God brings a blessing. We see an example in 1 Samuel.

An Insult Turned to a Blessing

In the days when judges ruled Israel there was a barren woman named Hannah. She was married to Elkanah, who had taken a second wife named Peninnah. Hannah was miserable because her rival taunted her due to her barrenness. More than likely Elkanah took the second wife because Hannah was barren. Hannah was loved and filled her husband’s heart, but Peninnah filled his house. Yearly the family traveled to worship at Shiloh. There especially Peninnah would provoke Hannah until she wept. Hannah could not be comforted, even by her husband.

On one particular visit to Shiloh, she was undone. Out of deep anguish, Hannah wept before the Lord and made covenant, “If You will give me a child, then I will give him back to You all the days of his life” (author’s paraphrase).

While she prayed, Eli, the head priest and judge of Israel, watched her and:

Seeing her lips moving but hearing no sound, he thought she had been drinking. ‘Must you come here drunk?’ he demanded. ‘Throw away your wine!’ — 1 Samuel 1:13-14 NLT

What an insult! Not only was he insensitive to her pain, but he was so spiritually numb, he thought her travail arose out of a drunken stupor. She had left the presence of her constant adversary to find comfort in the presence of the Lord, only to be judged by the highest spiritual authority in the land as wicked. Every year she came to Shiloh empty-handed with no child to present before the Lord. Each year she encountered the looks, the stares, the whispers, and jeers of those around her.

How would you have responded if your pastor had accused you of evil at the moment of your greatest pain? Perhaps you would have thought, This guy is the head pastor? Doesn’t he know I am fasting and crying out to God? What an insensitive, unspiritual jerk! This is the last time I will come here to worship!

These thoughts could have easily produced an outburst, “You call yourself a man of God and can’t recognize someone in pain! Can’t you recognize someone in deep prayer? What kind of pastor are you? What kind of church is this? I have had it! I’m going to find another church with a pastor who is sensitive to me and the things of God!” This would not be an uncommon response in our churches today — if not brazenly to the pastor’s face, then behind his back to congregation members.

But hear Hannah’s response when she was severely insulted:

She responded with respect and honor. Even though his actions and assessment far from deserved it, she honored the position of authority on his life. She went so far as to assure him she was not wicked.

In reality the one with excessive behavioral patterns at that time was Eli, and his judgment was hanging over him. Her focus was not on his behavior, but on her own. Hannah was a woman who truly feared the Lord. If anything was wrong with the leader, God would deal with it. How we need this kind of true submission and humility today.

His response to Hannah changed:

There was no drifting from her submission to him; she honored him as a man of God and even thanked him for his word of blessing. Watch what happened:

The entire family got up early the next morning and went to worship the Lord once more. Then they returned home to Ramah. When Elkanah slept with Hannah, the Lord remembered her request, and in due time she gave birth to a son. — 1 Samuel 1:19-20 NLT

God used a fleshly, insensitive priest to release the words to bring forth the conception of a promise. In fact, shortly afterward God boldly declared,

‘I have vowed that the sins of Eli and his sons will never be forgiven by sacrifices or offerings’. — 1 Samuel 3:14 NLT

You would never want to hear God say these words regarding you or your family. God who is merciful and kind, yet just, also said in regard to Eli and his family: “‘The time is coming when I will put an end to your family, so it will no longer serve as my priests. All the members of your family will die before their time. None will reach old age. You will watch with envy as I pour out prosperity on the people of Israel’” (1 Samuel 2:31-32 NLT). This definitely wasn’t a godly spiritual leader.

A closed womb was opened, and life came out of darkness. The following year she held little Samuel at her breast.

The young man consecrated before his conception would bring revival to Israel. What Hannah desired and prayed for years wasn’t granted until she honored the insensitive priest who insulted her. It had little to do with his behavior, and mostly to do with her genuine honor and submission to his authority.

There’s an amazing principle to glean from this: when God places His authority on a person, no matter his private or personal behavior, we may still receive if we look beyond it and honor him as sent from God. Jesus made it clear that many will receive from corrupt ministers, as Hannah did. He said,

Many will say to Me in that day, ‘Lord, Lord, have we not prophesied in Your name, cast out demons in Your name, and done many wonders in Your name?’ And then I will declare to them, ‘I never knew you; depart from Me, you who practice lawlessness!’ — Matthew 7:22-23

When we read this scripture, we too often concentrate on the many who did miraculous works in Jesus’ name but were turned away. This is serious and sobering, indeed, but let’s look at the flip side; there were those who received authentic ministry from these workers of iniquity. They received because they accessed God through them, as Hannah had. The ones Jesus spoke of were similar to Eli, whose house God judged forever!

I have written this book not to corrupt ministers, but to persons under authority. Scripture leaves no doubt that there are corrupt authorities and godly ones. If those under authority take the yoke of judgment upon themselves, they no longer are submitted to established authority, but have elevated themselves as judges over their leaders. Their hearts are lifted up in pride above the ones God placed over them. They have exalted themselves over the ordinance and counsel of God. In essence, they unknowingly say to God, “You are not properly exercising judgment, so I will take the matter into my own hands.”

Hannah acknowledged the authority on Eli’s life and honored it. He judged and insulted her, yet she honored him. If she lived by the seeing of the eye and the hearing of the ear, she might have judged his behavior questionable. However, she lived not by natural reasoning, but by the fear of the Lord and divine authority. She trusted in God who judged righteously.

Remember well, Jesus sent Judas equipped with power to do miracles and cast out demons. Yet Jesus knew Judas would eventually be revealed as wicked:

Jesus knew him through the discernment found in the fear of the Lord, even before his sin was evident. Judas did miraculous acts and returned rejoicing with the others that the demons were subject to him in Jesus’ name (Mark 6:7-13; Luke 10:17). Did people receive ministry from the hands of Judas? The very same hands that had stolen from the ministry treasury? Absolutely!

Excerpted with permission from Under Cover by John Bevere, copyright John Bevere.

God will use absolutely any situation and any person to achieve His purposes. Our job is to stay within His will and act accordingly and trust that He is the judge, not us. Have you ever been in a situation where you had to trust the Lord in a circumstance with someone you didn’t trust? How did you see God work good out of that situation? Come share with us on our blog. We want to hear from you! ~ Devotionals Daily