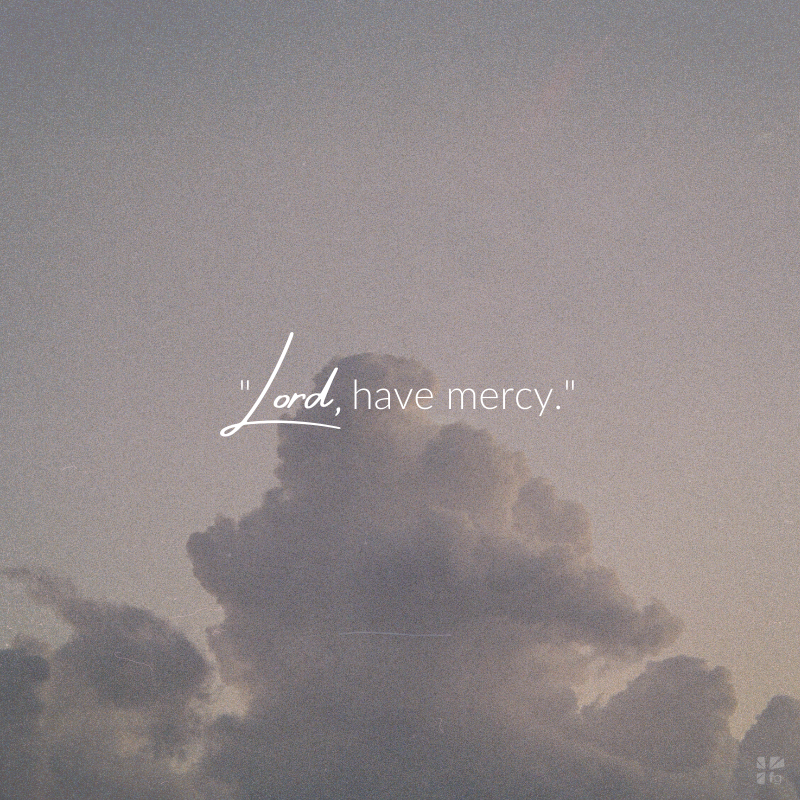 It was the one sentence uttered to Jesus more than any other.

Those who traveled with Jesus heard it over and over.

We would have been amazed at the number and variety of people that came to Jesus and said, “Kyrie eleison.” Some shouted it to Jesus from afar while others cried out up close. Some whispered the request while kneeling in humble respect, hoping Jesus would come to them.

Others frantically gave chase. Men and women; fathers and mothers; the outcast, desperate, and disabled — all called out to Jesus, for themselves and for their loved ones, “Kyrie eleison — Lord, have mercy.”

The result? Jesus responded every single time. Not once did Jesus turn away this request. Rather, He stopped, delayed, inquired, healed, singled out of the crowd, and even expressed astonishment over the faith of those who asked. Christ reacted with compassion to every utterance of the mercy prayer.

Dispensing mercy was an essential part of His mission. To Jesus, showing compassion, granting grace, and alleviating suffering were not interruptions; they were central to His purpose. The disciples, however, felt differently. They seemed to think this request and Jesus’ willingness to respond were getting in the way of the real business. But Jesus didn’t seem wearied by it at all. On the contrary, He encouraged it.

Jesus told a parable about two people who went to the temple; one was a Pharisee and the other a tax collector. The Pharisee “stood up and prayed about himself.” He pointed out to God all the wonderful things he had done for Him, saying, “I fast twice a week and give a tenth of all I get.” The other man stood at an unworthy distance and wouldn’t even look up. In his shame before God, he pounded on his chest and simply said his own version of the most prayed prayer: “God, have mercy on me, a sinner” (Luke 18:9–13).

Jesus summarized the scenario by saying, “I tell you that this man, rather than the other, went home justified before God. For everyone who exalts himself will be humbled, and he who humbles himself will be exalted” (Luke 18:14).

After this story, parents brought their children to Jesus to have Him bless them, and blind men did everything they could to get His attention. By no means was Jesus annoyed by the mercy prayer. On the contrary, He fanned the flames.

Mercy Assumes We Are Sinners

Many times those who prayed the mercy prayer didn’t just say, “Lord, have mercy.” No, they ended the most prayed prayer recognizing an essential fact about themselves: “Lord, have mercy on me, a sinner.”

Mercy assumes we will sin. Arthur W. Pink said it well when he wrote, “Mercy… denotes the ready inclination of God to relieve the misery of fallen creatures. Thus ‘mercy’ presupposes sin.”1 We are fallen creatures with a propensity for wrongdoing. The result? Shame. Guilt. Strained relationships. Regret.

The good news of God’s mercy is that He desires to relieve the consequences of our sin, the worst of which is the toll it exacts on our relationship with Him. We were meant to walk with God in the cool of the garden of Eden, and yet, when we sin, we find ourselves hiding from God, blaming those around us, and searching for makeshift fig leaves to cover our shame. God’s reflexive response is to lessen these consequences — to show mercy.

When Adam and Eve ate of the one tree that God forbade, the penalty was severe: death and banishment from the garden. Yet God replaced their wilting leaves with something more durable; and as they moved east of Eden, one thing became surprisingly clear:

while they had left the garden, God had not left them. His presence served as a balm of hope upon their guilt.

Anyone who’s been to Sunday school or watched the Super Bowl knows the verse John 3:16: “For God so loved the world that He gave His one and only Son, that whoever believes in Him shall not perish but have eternal life.” But the next verse is equally important: “For God did not send His Son into the world to condemn the world, but to save the world through Him” (John 3:17). God is not in the condemning business.

If we want to see how Jesus treats sinners, we need to look no further than the woman caught in adultery. Only a few chapters after Christ says that He has not come to condemn us, we see Him backing up His words with actions as a woman is mercilessly dragged into His presence. Her accusers informed Jesus that she was caught in the act of sexual sin and that the law said she deserved death. They wanted Jesus to weigh in on her fate. The crime was a serious one, but there was something more sinister at play: “They were using this question as a trap, in order to have a basis for accusing Him” (John 8:6). They hoped Jesus would discredit Himself with His response and weaken His standing with the people.

Think of the planning that might have gone into this ruse. First, they must have had a meeting about how to trap Jesus, where they hatched a plan starting with catching someone committing a capital crime. We are only left to our imaginations as to how they succeeded in catching this woman. Did they voyeuristically peep through a crack in the curtains while hiding in the bushes? Or did one of them seduce her only to betray her to the authorities? We don’t know. What we do know is that they thought this was the best way to trap Jesus. Why? He had a reputation. He was known for mercy. They concocted this plan because they knew, when given the chance, He would seek to remove the penalty for this guilty woman.

Jesus diverted everyone’s attention from her naked shame as He knelt down to write something in the dirt. They didn’t count on Jesus’ brilliant response. He upheld grace and truth by saying, “If any one of you is without sin, let him be the first to throw a stone at her” (John 8:7). Reluctantly, the crowd of accusers dropped their rocks and dispersed. Only Jesus was without sin. Only Jesus could justly throw the first stone. Only Jesus remained. She was left standing face-to-face with the only person qualified to carry out her sentence. “Woman, where are they? Has no one condemned you?” Jesus asked.

“Then neither do I condemn you,” Jesus declared.

“Go now and leave your life of sin” (John 8:10–11). Mercy assumes we are sinners. Thus the apostle Paul proclaims, “Therefore, there is now no condemnation for those who are in Christ Jesus” (Romans 8:1). When we allow that to settle into our souls, we will experience true freedom: knowing that God, though he is holy and just, desires to grant us a pardon through Christ. Seeing firsthand how Jesus deals with someone caught in the act should cause us to run to Him (not away) despite our sin, for we have nothing to fear.

In his book Abba’s Child: The Cry of the Heart for Intimate Belonging, Brennan Manning tells a story of when he was a young novice in the Franciscan order. The monks practiced self-flagellation, the beating of oneself (in this case, with a foot-long piece of telephone wire) for the purpose of purifying oneself of sinful desires. On Friday nights during the season of Lent, Psalm 51 was recited aloud by an assigned priest, while they each would go into their monastery cells and beat themselves. Manning whipped his back and buttocks so severely that when his blisters were observed the next day in the showers, he was reprimanded for being too zealous. He wrote, “Truth to tell, I was trying desperately to make myself pleasing to God.”

Brother Dismas occupied a neighboring cell to Manning, and Manning could hear the ruthless sound of his self-scourging. Fearing that his brother was also going too far, Manning peeked through a crack in the door only to see Brother Dismas whipping the wall with a cigarette in his hand and a smile on his face. Manning concludes, “I pitied the poor wretch and returned to my cell with an insufferable sense of spiritual superiority.”2

What is painfully ironic is that this all happened while Psalm 51 was read aloud. The psalm begins,

Have mercy upon me, O God,

According to Your lovingkindness;

According to the multitude of Your tender mercies,

Blot out my transgressions. (Psalm 51:1 NKJV)

Why do we seek to deal with our sin differently than God does? Why do we beat ourselves up because of the things we have done? We are prone to think change happens through discipline and trying harder. But one reason God is not into condemnation is because his goal is transformation — and that happens best in an environment of mercy. The apostle Paul wrote, “Do not conform any longer to the pattern of this world, but be transformed by the renewing of your mind” (Romans 12:2). We are called to be transformed, and it is crucial that we understand the setting in which the transformation occurs. Before Paul called us to transformation he said, “Therefore, I urge you, brothers, in view of God’s mercy, to offer your bodies as living sacrifices, holy and pleasing to God — this is your spiritual act of worship” (Romans 12:1). The Christian life is best lived within eyeshot of the lovingkindness of God. Transformation flourishes “in view of God’s mercy.”

How do we change? Is it by trying harder? Is it out of duty? Fear? While these motivations work in the short run when it comes to keeping our behaviors suppressed, true transformation only happens when we exchange our shame and fear for His mercy. As Steve and Sally Breedlove and Ralph and Jennifer Ennis put it, “The mercy we are offered in Jesus Christ brings forgiveness. But it is more than that; it is also an offer that transforms our very identity — we are invited into the family of God as adopted children. Christians call that identity-level change transformation.”3 God’s mercy creates the canopy under which our growth into Christlikeness takes root.

True change occurs as we bask in the warmth and comfort of God’s compassion and grace. True transformation is brought about not by making commitments that begin with “I am going to…” or “I will try harder to…” No, any strategy for change that begins with “I” is doomed to fail. True change begins with God. Ultimately, the alteration of our hearts takes place in the hands of a God who is slow to anger and abounding in love. His kindness leads us to repentance (Romans 2:4). God’s mercy is for sinners, and God’s mercy is also for those who are in pain.

Did this excerpt give you a new perspective on God’s mercy? You may be in a season of life where all you can say is, “Lord, have mercy.” And, you can be encouraged that He invites that prayer day and night. In your own words, how do you describe God’s mercy? How have you seen it active in your life right now? Come share on our blog!