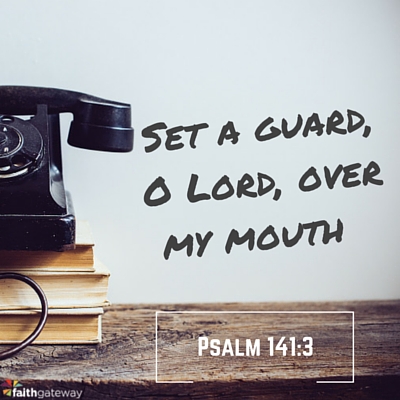 Editor’s Note —The James Code is dedicated to “those special and sacrificial pastors, their wives, and in most cases, their widows in Mission:Dignity who have given their lives to serving others so often in “out of the way places,” and who are now in their declining years. While in ministry they lived in church-owned homes and received smaller salaries, and now, in their retirement years, are in financial need. We are on a mission to bring them dignity, and it is an honor being Christ’s hand extended to them. All royalties from The James Code, The Jesus Code, and The Joshua Code go to support these sweet servants through Mission:Dignity.” (Learn more about Mission:Dignity at www.guidestone.org/missiondignity.)

Even so the tongue is a little member and boasts great things. See how great a forest a little fire kindles! And the tongue is a fire, a world of iniquity. The tongue is so set among our members that it defiles the whole body, and sets on fire the course of nature; and it is set on fire by hell. For every kind of beast and bird, of reptile and creature of the sea, is tamed and has been tamed by mankind. But no man can tame the tongue. It is an unruly evil, full of deadly poison. — James 3:5-8

Having spoken about the potential of the tongue to direct speech for the good, James then warned that the same tongue also has potential for evil. Words controlled by our Master can be directed in a positive way, but uncontrolled speech can be contentious and destructive like fire and poison.

I distinctly remember two teachers during my formative school days. My English teacher was a strict disciplinarian. She was up in years, she had never been married, and she had devoted her whole life to instructing young people on the finer points of English grammar and literature. On one occasion, she asked me to stay a moment after class. Assuming I was in some sort of trouble, I did so with apprehension. I approached her desk after all the others had left the room. I could not believe what she said: “Son, you have character, and if you applied yourself in this class, you could be an A student.” She believed in me! In fact, that day she changed the way I thought about myself with her simple words of affirmation.

The other teacher I well remember was one of my coaches. He sought to motivate by intimidation, ridicule, and vile words. His goal was to break us down. It didn’t work for many of us. More than one kid walked away from that team, head hanging, never to return.

Our words can be controlled or contentious, can be directed in a positive manner or utterly destructive.

See how great a forest a little fire kindles! And the tongue is a fire, a world of iniquity. The tongue is so set among our members that it defiles the whole body, and sets on fire the course of nature; and it is set on fire by hell.

A little spark from a match has started more than one massive fire. Spreading faster and farther than we might ever imagine, that kind of fire destroys millions of dollars of timber and homes, leaving in its wake a scorched landscape.

The tongue, James said, is like a fire. How many reputations have been ruined by a carelessly spoken word? The impact of our words spreads far and fast, especially in our digital age. A word tweeted in Dallas can be retweeted all over the world in seconds. Like a fire, that word can get out of control with lightning speed and do irreparable damage. Contentious speech is always destructive. Like a fire, our words can increase the burning and too often destroy relationships and reputations.

For every kind of beast and bird, of reptile and creature of the sea, is tamed and has been tamed by mankind. But no man can tame the tongue.

A few years ago while in the East African country of Kenya, I visited the African bush country. I will never forget seeing those proud lions in their natural habitat. It’s amazing to think that we have captured these great beasts and trained them to jump through rings of fire and sit on command. Seeing the giant elephants in their natural setting makes it even more difficult to believe that man has trained them to grab each other’s tails, march in unison, and stand up on their hind legs on a small box.

We can train just about anything there is — except the tongue.

James had another word to illustrate the destructive potential of the tongue. He said it is “full of deadly poison.” Poison usually works secretly and sometimes slowly until it eventually kills. The tongue can be like that. A few poisonous words inserted into a conversation and spoken in venomous antagonism can destroy relationships that were decades in the making and cripple the poisoned person for life. Contentious speech can indeed be immeasurably destructive.

James reminded us that the tongue is destructive like fire or poison and “is set on fire in hell.” Behind every spoken word of divisiveness or filth or rumor or anger is Satan himself.

This enemy delights in using uncontrolled tongues as a tool as he goes about his business of destroying hearts, homes, and hopes.

Uncontrolled fire can destroy, but fire itself isn’t bad. When controlled, it is beneficial. We can heat our homes with it. We can sterilize surgical instruments with it. We can cook our meals with it. In the same way, we can use our words to bless or to blast, to direct or to destroy.

We’ve all had times when we wished we hadn’t said what we said and then watched the little spark result in a raging fire we couldn’t control. No wonder King David prayed,

All of us need a guard over our mouth! As I mentioned earlier, for instance, we may find ourselves gossiping (saying behind someone’s back what you would never say to his or her face) or flattering (saying to someone’s face what you would never say behind his or her back). And both are wrong. So let’s join David in asking God to “set a guard over [our] mouth [and] to keep watch over the door of [our] lips.”

Excerpted with permission from The James Code: 52 Scripture Principles For Putting Your Faith Into Action by O. S. Hawkins, copyright Thomas Nelson.

What a great prayer to add to our every day first-thing-in-the-morning prayers — Lord, set a guard over my mouth and keep watch over my lips that my words would only reflect Your heart and be an encouragement and life-giving word to others. We all have moments when something slips past our teeth and we regret it immediately. Let’s pray today for God’s grace before we speak! Come join the conversation on our blog. We’d love to hear from you about avoiding contentious speech and edifying others instead! ~ Devotionals Daily