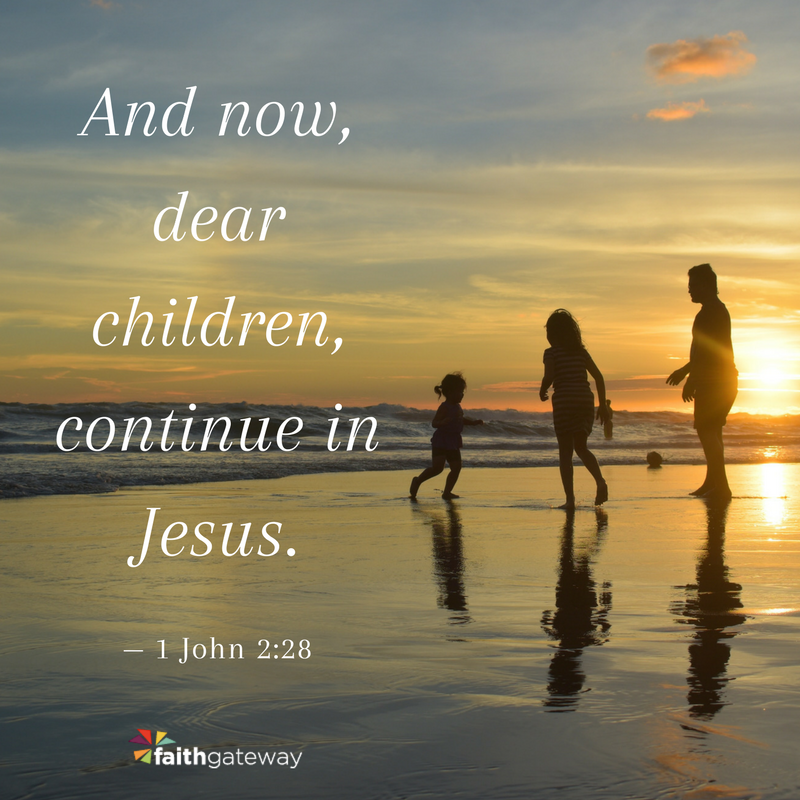 Do not rebuke an older man harshly, but exhort him as if he were your father. Treat younger men as brothers, older women as mothers, and younger women as sisters, with absolute purity. — 1 Timothy 5:1-2

No, my baby daughter didn’t teach me about predestination or transubstantiation, or about how to parse Greek words. But she became a seminary for my character — one that continues to this day.

Paul talked about how God uses family life to prepare us for ministry. In fact, when talking to the young man Timothy, Paul appealed to familial relationships: “Do not rebuke an older man harshly, but exhort him as if he were your father. Treat younger men as brothers, older women as mothers, and younger women as sisters, with absolute purity” (1 Timothy 5:1-2).

Paul encouraged Timothy to draw on family life as the model for his ministry. Certainly, Paul followed this line of thinking in his own life. Though we have no evidence that Paul actually had children, he liked to use parenting metaphors when speaking about his own ministry. It expressed the attitude he had toward those under his care:

I am writing this not to shame you but to warn you as my dear children. — 1 Corinthians 4:14

As a fair exchange — I speak as to my children — open wide your hearts also. — 2 Corinthians 6:13

My dear children, for whom I am again in the pains of childbirth until Christ is formed in you. — Galatians 4:19

We were like young children among you. Just as a nursing mother cares for her children. — 1 Thessalonians 2:7

The apostle John had the same attitude, confirming that this expresses the mature demeanor of one called to shepherd others:

I have no greater joy than to hear that my children are walking in the truth. — 3 John 4

Even celebrities understand the positive impact of how working with children prepares us to work with adults. Singer Susanna Hoffs played with the Bangles, an all-female rock band that enjoyed considerable success in the 1980s but then broke up when the women started their families. They reunited almost ten years later, and Hoffs talked to a reporter about how different it felt being in a band after she had kids than before. Becoming a parent had equipped her to handle her bandmates more effectively: “If someone comes into the rehearsal studio in a cranky mood, I’m like, ‘OK, are you hungry or tired? Do you need a nap? How about a cappuccino?’”1

Actress and writer Carrie Fisher has said, “What I know about love I learned from being a mother.”2 And Hollywood actor Jude Law confessed, “If you think it’s being a man lying in bed until twelve, you ought to try getting up at seven to take care of kids. If there’s anything that’s going to make a man out of you, it’s having your will broken by a one-year-old girl.”3

The next time you hold a baby, think of him or her as an eight-pound seminary professor. This child will teach you about patience, service, selflessness, communication, listening skills — everything you need, character-wise, to serve God’s church.

When we enter parenting with the assumption that we have lessons to be learned as well as lessons to impart, God can use the process to make us into more effective ministers for His kingdom.

Cooperate with God in this aim: What does He want to teach you today? What kind of character is He going to form out of your interaction with this drooling bundle, curious toddler, or brooding teen? What type of people might He be preparing you to reach out to?

Heavenly Father, our home is one of the best places to learn how to understand, serve, forgive, and ask forgiveness. Help us to give ourselves fully to the process of parenting so that we can increasingly become the kind of people You call us to be. In Jesus’ name, amen.

Is there any calling more challenging than parenting? There aren’t any other relationships that demand so much of us, stretch us past the limit, and knock the selfish out of us as intensely as the parent/child bond. How has parenting shaped your reliance on Jesus? Come share with us on our blog. We want to hear from you! ~ Devotionals Daily