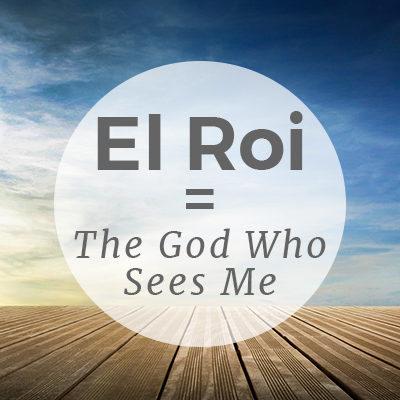 In the ancient world it was not uncommon for an infertile wife to arrange for a slave girl to sleep with her husband so that the family could have an heir. In fact, Ishmael, the son born to Abraham and Hagar, would have been considered Sarah’s legal offspring. Hagar and Ishmael might have fared better had Hagar not forgotten her place the moment she learned of her pregnancy. Still, Sarah’s treatment of her seems inexcusable and harsh. In the midst of her difficulties, Hagar learned that El Roi (EL raw-EE) was watching over her and that He had a plan to bless her and her son. One of Abraham’s grandsons, Esau, married Ishmael’s daughter, and it was the Ishmaelite traders (also referred to as Midianite merchants in Genesis 37:26–28), themselves descended from an Egyptian slave, who transported his great-grandson Joseph into slavery in Egypt.

Ishmael slumped beneath a bush, hoping for relief from the desert sun. He felt feverish, dizzied by the heat. Hagar had watched him drink the last of the water, greedily sucking at the empty skin. His face was flushed, his speech was blurred. It wouldn’t be long, she thought, until the boy was past helping. And what of it? She could do nothing for him.

Unable to bear her helplessness in the face of his anguish, she sat down several yards away and began rocking back and forth, wailing out her grief. The angel of the Lord had named him Ishmael, meaning “God hears.” But now the name seemed to mock her. Was God deaf, unable to keep His promise? Or cruel? Was He simply unwilling to listen to her cries for help? She would not allow herself to think so.

In the midst of her despair Hagar suddenly heard a voice calling: “Do not be afraid; God has heard the boy crying. Lift him up and take him by the hand, for I will make him into a great nation.” Then God opened Hagar’s eyes and she saw the thing she dreamed of—a well full of water.

Many years later, the psalmist echoed words that must surely have been on Hagar’s mind during her ordeal: “I am worn out calling for help; my throat is parched. My eyes fail, looking for my God” (Psalm 69:3).

The promise God had made to Hagar and Ishmael so many years before stretched itself thin during their time of trial, but never so thin as to break, for God upheld the word He had spoken years before. Remember this when you fail for a time to find God’s help or to receive answers to your prayers.

Ask Elo Roi – the God who sees you

Ask El Roi, the God who sees you, to open your eyes to His work and to increase your faith even and especially when His promises seem impossible to fulfill.

Lord, I praise you for you know the whole story. From beginning to end, You see it all. Give me the humility to admit my limitations. For I don’t always see the past accurately, my vision of the present is often blurred, and I am blind when it comes to the future. Help me fasten my eyes on You, trusting in Your vision for my life and in Your watchful care.

Maybe you’re in a season of feeling like God is deaf to your cries, blind to your circumstances, or unable to keep His promise. Maybe you’ve wondered if God is just cruel and unwilling to listen or care. Read Hagar’s story again and take a moment in quiet to receive the beautiful truth that El Roi sees you, cares about you, and will provide. We’d love to hear from you! Please leave a comment or prayer on our blog below.