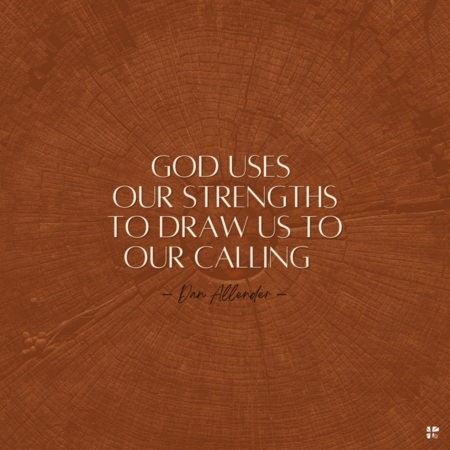 The Kingdom of God has come in person through the obedience of Jesus as He offered Himself as the perfect priest, prophet, and king. In turn, He entrusts and empowers us to live out a kingdom on earth as it exists and operates in Heaven.

And I confer on you a kingdom, He said, just as My Father conferred one on Me, so that you may eat and drink at My table in My Kingdom and sit on thrones, judging the twelve tribes of Israel. — Luke 22:29-30

Our calling is to come to know who we are and what we bring to the world that reveals how the Kingdom of God works. How we live that out in our particular space is through daily practicing Jesus’ model and indwelling power.

Years ago, when I was the president of a fledgling graduate school, I shared a meal with a highly respected educator-president of a Christian university. The man had served for many decades as head of the school, and I was in my first three years of servitude. I complained verbosely about my situation — everything from faculty antics, to students who felt our teaching was too biblical, to others who thought the same professors were heretics, and I threw in donors, accreditors, staff, and then circled back around to the irascible faculty just for good measure. I am sure he found it all riveting, if not insufferable, though he was kind enough to allow me to vent.

Finally, he stopped me and asked, “Do you not know your heritage as an academic?” I didn’t. He said, “The university system has been in operation since the University of Bologna in 1088. And who were the primary teachers? Not the first son. He was granted primogeniture — he got the land. The second tended to enter the next most valuable world, the military. The third son found his way into the next most powerful world, the church and political realm. Only the fourth sons and beyond, often children conceived with mistresses, went into the academy. Given this heritage, your conflicts in the academy ought not surprise you.”

I can’t confirm the truthfulness of his claim, but I heard precisely what he wanted me to grasp: I was an illegitimate son, full of envy and robust struggle, an outsider to the realms of power that land, commerce, weaponry, politics, and ecclesiology offer. He silenced my complaint and invited me to bless my calling. I have been given a kingdom that calls me to embrace the role of a prophet, and even more so as an academic trainer of therapists.

To usher in God’s Kingdom on earth, we need to know our personal stories and how they fit the organizations or systems we are drafted into.

I say “drafted,” though for some it is truer to say “enlisted.” I, quite certainly, was drafted. I didn’t intend to follow Jesus, pursue a degree in psychology, address sexual abuse, or be part of starting a graduate school; I all but fell into those opportunities. Once drafted, I did my best to perform well and strive for excellence, but I still sometimes wish I were an attorney and made a boatload of money.

Whether we were drafted or enlisted, fell into a job, or followed our plan and got our heart’s desire, we were given a “kingdom” to serve. In our kingdom, we are never intended to stake a claim to only one aspect of Jesus; rather, we are meant to reveal the fullness of His character as a priest, prophet, and king or queen. We all start out more gifted in one, weaker in another, and middling in a third, but we are called to reveal all three. We must never be dismissive of our areas of weakness as if someone else will pull that weight for us. I know some truly remarkable men and women whose gifting is equally replete in all three offices. Yet at the same time, I don’t envy them. It’s difficult enough to bear Jesus’ likeness in one station; to score high marks in all three is to share in His sufferings even more.

Given this is the struggle — to learn to suffer well — the best way to consider one’s calling I’ve found is through the lens of our personal stories.

Our stories give rise to our callings, and our callings set the trajectory for more to discover their stories. If we learn to read our stories well, we will see at least a hint, if not the full colorful rainbow, of themes that shape us and make up the multihued palette of who we truly are and what we are meant to do for the sake of the Kingdom.1

My story begins with a borderline personality-disordered mother, a dead Jewish father who fled from his ethnicity, and a stepfather who loved and served a difficult woman and a traumatized boy. He did so by working extremely hard to supply all our physical needs while being too terrified to engage in the disquiet of his wife’s soul or the fury of his son’s heart. He was one of the kindest men I have known, but he was also afraid to take on the debris of his family. He left that up to me.

I remember making decisions as to where we would go for summer vacation by the time I was six. Early in my life, I realized that it was my job to entertain and soothe my mother. I studied her as if my life depended on it, which in a way it did, and grew to anticipate when she would explode, weep, or faint and fall. I was a therapist by eight, and I played my role well. My defense from being consumed by my mother’s care was to remain distant and defiant. My classic cries for help kept me regularly frequenting the principal’s office. I was a stranger to my peers and awkward in my world. Angry, lonely, observant, and verbal, I found solace in odd, forgotten things and strange people. At a young age, a deeper trauma entered my world through sexual abuse, and I learned that if you’re crazy and unpredictable, most people will leave you alone.

I hated being in charge. It was always a no-win situation. If I took over, my father resented me. If I didn’t, my mother was terrified, and in turn my father resented me. Any choice I made determined our direction, but if the plan didn’t work, it was always my fault. I was given inappropriate power, held responsible for what my young shoulders weren’t meant to carry. Escaping through anarchy felt good.

But in this, my grandmother was witty and tender, quiet, and defiant like me. I remember sitting next to her as she rustled my hair and discreetly helped me interpret my mom’s antics. She’d name the behavior and then share the layers of meaning packed into a single word or look. She provided my first training in hermeneutics, ushering me into the complexity of the human heart by helping me understand that what I studied was only a portion of what was to be understood. All my later theological and psychological reflections formed a foundation as she helped me see my world with wit and kindness. As an only child with a mentally ill mother, a passive father, and a peculiar grandmother, my story framed my way of being in the world — and formed my calling.

God uses our strengths to draw us to our calling and then uses our weaknesses to reveal our need for redemption.

How has He used your strengths to draw you to your calling? And, how has God used your weaknesses to show you what needs to be redeemed in your life? Come share with us! ~ Devotionals Daily