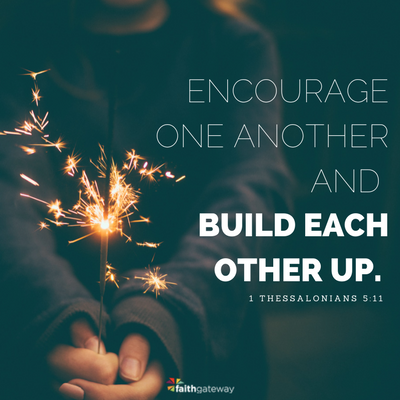 Therefore encourage one another and build each other up. — 1 Thessalonians 5:11

In the classic 1904 novel Freckles by Gene Stratton-Porter, a kindly couple gives a young man who is “intensely eager to belong somewhere” a new chance in life by offering him employment.1 The boss’s wife treats Freckles like a son, becoming the mother he never had. When Freckles’s boss sees how this kindness leads the young boy to tears, he praises his wife:

Sarah, you’re a good woman, a mighty good woman. You have a way of speaking out at times that’s like the inspired prophets of the Lord… Did you see his face, woman? You sent him off looking like a white light of holiness had passed over and settled on him. You sent the lad off too happy for mortal words, Sarah. And you made me that proud of you! I wouldn’t trade you and my share of the [forest] with any king you could mention.2

The same day my wife read that passage to our children on a long car ride, I had watched her come to the car and told her, “You know, you look really good today,” and my wife responded with the typical wifely response: “You think so? Because my hair didn’t quite turn out the way I had planned it, and I’m not sure about this shirt. It doesn’t look quite right when I leave it out, but I’m not sure it works tucking it in either, and — ”

“Well,” I added, cutting her off, “I think you look fantastic.”

The Bible calls us to encourage each other, which is an active, ongoing obligation during times of challenge, stress, and even just everyday living. Consider how widely encouragement is urged and reported in Scripture:

Yet, in our selfish humanness, instead of thinking about encouraging, we may be tempted in our marriages to ask if we’re being encouraged. In fact, I’ll bet there are many wives who, after reading the quoted passage from Freckles, may even have thought, Why doesn’t my husband talk to me like that? instead of asking, “Do I encourage my husband like that?” My friend Lisa Fetters observed that “women think we deserve this encouragement and that men don’t need it, but men do need to hear much encouragement.”

When was the last time you looked in your lover’s eyes and said (to use old-fashioned language), “You’re prime, you know that? You’re really prime!”? When was the last time you didn’t take your spouse’s hard work for granted — inside the home or outside it — and specifically thanked him or her for what he or she contributes to your life? Has it been so very long since you’ve put words to your thoughts and told your spouse specifically what you’re feeling?

Don’t measure yourself merely by what you don’t do (“I don’t come home drunk, I don’t get into affairs, I don’t waste our money”). Love is an active duty, and encouragement, as a biblical command, requires us to take the initiative. We live in a world that beats us down on an almost daily (if not hourly) basis. Marriage is designed as an oasis of encouragement, a way station where we can get renewed and refreshed with loyalty and kindness.

It’s so easy to be complacently married, forgetting the need to unleash the active force of encouragement — but take this gentle reminder.

Love is an active duty, and encouragement, as a biblical command, requires us to take the initiative.

Think of a few things, even now, and make sure another day doesn’t go by before you look your spouse in the eye and say, “You’re prime, just prime!”

Excerpted with permission from Devotions for a Sacred Marriage by Gary Thomas, copyright Gary L. Thomas.

What words of encouragement can you share today? How can you show gratitude, express thankfulness specifically in a way that uplifts your spouse? Come share with us on our blog. We would love to hear from you! ~ Devotionals Daily