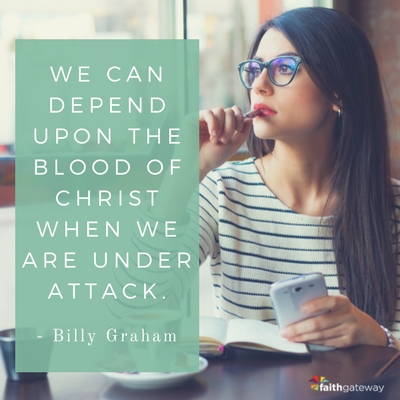 Enemies of the Christian

For we wrestle not against flesh and blood, but against principalities, against powers, against the rulers of darkness of this world, against spiritual wickedness in high places. — Ephesians 6:12

Possibly you have already found that you have enemies. These are dangerous, vicious enemies who will use any method to defeat you in your Christian life. Within minutes after you made your decision you found these enemies already at work: either you were tempted to commit some sin, or you had a moment of depression and discouragement. To be sure, everything is exciting and thrilling just after you have made your decision for Christ! But it is also natural to have doubts, problems, questions, temptations, discouragements, and even difficulties.

The Bible teaches that you have three enemies that will be warring against you as long as you live. You must be prepared. They must be warded off.

First, let’s look at these enemies we must face. Let’s unmask them and see what they are, and who they are, and how they operate.

First — the devil. We have already seen that the devil is a mighty being who opposes God and tempts God’s people. We have found that even though he was beaten at the cross by Christ, he still has power to influence men for evil. The Bible calls him “the wicked one,” “the devil,” “a murderer,” “a liar, and the father of lies,” “an adversary” who seeks to devour, “that old serpent,” and “accuser of our brethren” (Matthew 13:19; Luke 4:33; John 8:44; 1 Peter 5:8; Revelation 12:9-10).

The moment you made your decision for Christ, Satan suffered a tremendous defeat. He is angry now. From now on he is going to tempt you and try to lead you into sin. Don’t be alarmed. He cannot rob you of your salvation, and he need not rob you of your assurance and victory. He will do everything in his power to sow seeds of doubt in your mind as to whether your conversion is a reality or not. You cannot argue with him, for he is the greatest debater of all time.

The moment of test has come with the first temptation. Remember to refuse any reliance upon your feelings; they will change like a weather vane in a whirlwind. His next approach probably will be to make you feel proud and important — to make you confident of your own powers, ambitions, desires, and aims. On another occasion he will put hatred in your heart. He will tempt you to say unkind and ungenerous things about others. He will put envy, discontent, and malice in your heart. Then, on another occasion, he will tempt you to lie, and you could easily find yourself being a hypocrite. Lying is one of the worst of all sins and can be committed by a thought, word, or deed. Anything that is intended to deceive another person is lying. The devil will do his best to make a liar of you. He also will try to get you to work for him to tempt others to sin — to try to lead other Christian friends astray. If you are not careful, you will find yourself actually in the employ of the devil. He is powerful, slick, crafty, wily, and subtle. He is called the “god of this world,” “the prince of this world,” “the prince of the power of the air” (2 Corinthians 4:4; John 12:31; Ephesians 2:2).

The devil will try to discourage you, to divert you; he will seek to dilute your testimony; he will attempt anything to destroy your relationship to Christ and your influence upon others.

You ask, “How can I overcome him? What can I do? Which way can I turn? Is there any escape?”

There hath no temptation taken you but such as is common to man: but God is faithful, who will not suffer you to be tempted above that ye are able; but will with the temptation also make a way to escape, that ye may be able to bear it. — 1 Corinthians 10:13

Years ago I heard my friend J. Edwin Orr compare the Christian attacked by Satan to a mouse being attacked by a housewife wielding a broom. The mouse does not sit there contemplating the housewife or the broom. It is busy looking for a hole — a way to escape. So we Christians under satanic attack should look for our “way of escape.”

God says in this verse that He has made a way of escape.

All doubts and temptations come from the devil. And remember that Satan can only tempt. He can never compel you to yield to the temptation. Remember also that Satan has already been conquered by Christ. His power is made inoperative in the life of a fully trusting and yielded Christian who is completely dependent upon God.

The poet put it this way: The devil trembles when he sees the weakest saint upon his knees.

To say that Satan will be defeated when we read or quote Scripture and will run like a scalded dog when we resist him is an oversimplification. But we can depend upon the blood of Christ when we are under attack. There are times when we simply must hide behind the person of Christ and ask Him to handle our problems. Jude says,

Yet Michael the archangel, when contending with the devil he disputed about the body of Moses, durst not bring against him a railing accusation, but said, The Lord rebuke thee. — Jude 9

That’s what we need to do — call upon God.

Now the Bible says that we are to “resist the devil, and he will flee” from us (James 4:7). But before that, God says, “Submit yourselves… to God.” If you have fully submitted, 100 percent yielded and surrendered yourself to Christ, then you can “resist the devil,” and the Bible promises he will flee from you. The devil will tremble when you pray. He will be defeated when you quote or read a passage of Scripture to him, and will leave you when you resist him.

Your second enemy is the world. The world means the cosmos, this world system. The world has a tendency to lead us into sin — evil companions, pleasures, fashions, opinions, and aims.

You will find in your born-again experience that your pleasures have been lifted into an entirely new and glorious realm. Many non-Christians have accused the Christian life as being a set of rules, taboos, vetoes, and prohibitions. This is another lie of the devil. It is not a series of “don’ts,” but a series of “dos.” You become so busy in the work of Christ and so completely satisfied with the things of Christ that you do not have time for the things of the world.

Suppose someone should offer me a hamburger after I had eaten a T-bone steak. I would say, “No, thank you, I am already satisfied.” Young Christian, that is the secret. You are so filled with the things of Christ, so enamored of the things of God, that you do not have time or taste for sinful pleasures of this world. The Bible says,

The full soul loatheth an honeycomb; but to the hungry soul every bitter thing is sweet. — Proverbs 27:7

The Bible also warns that the world and the “lust thereof” shall pass away, “but he that doeth the will of God abideth for ever” (1 John 2:17). However, under certain conditions these can become perplexing problems in our modern-day living. Many young people come to me and ask, “Is this wrong?” or “Is that wrong?” “Is this sinful?” or “Is that sinful?” One simple question, earnestly and prayerfully asked, will settle about 90 percent of your problems along this line. Just ask this question to yourself every time: “What would Christ have me to do?” Another question you can ask is, “Can I ask His blessing upon this particular thing for me?” “What would Christ think about my amusements, recreation, books, companions, and tele- vision programs?” “Could I ask Christ to go along with me to this particular event?” Being omnipresent, He’ll be there anyway. The point is, should you?

It does not mean that in society we are snobs or have a superiority complex, lest we be in danger of spiritual pride — which would be far worse than any worldliness. But today there are so many professing Christians who are walking hand in hand with the world that you cannot tell the difference between the Christian and the unbeliever. This should never be.

The Christian should stand out like a sparkling diamond against a rough background.

He should be more wholesome than anyone else. He should be poised, cultured, courteous, gracious, but firm in the things that he does and does not do. He should laugh and be radiant, but he should refuse to allow the world to pull him down to its level.

The Bible says that “whatsoever is not of faith is sin” (Romans 14:23), and the Bible again says that he who doubts is condemned if he does it. In other words, we are never to do anything of which we are not perfectly clear and certain. If you have a doubt about that particular thing that is bothering you, as to whether it is worldly or not, the best policy is “don’t do it.”

The third enemy that you will face immediately is the lust of the flesh. The flesh is that evil tendency of your inward self. Even after you are converted, sometimes your old, sinful cravings will return. You become startled and wonder where they come from. The Bible teaches that the old nature, with all its corruption, is still there and that these evil temptations come from nowhere else. In other words, “a traitor is living within.” “That wretched bent toward sin is ever present to drag you down.” War has been declared! You now have two natures in conflict, and each one is striving for dominance.

It is the battle of the self-life and the Christ-life. This old nature cannot please God. It cannot be converted, or even patched up. Thank God, when Jesus died He took you with Him, and the old nature can be made inoperative and you can “reckon ye also yourselves to be dead indeed unto sin” (Romans 6:11). This is done by faith.

However, you must distinguish very carefully again between use and abuse — between that which is lawful and that which is unlawful. Some of these things that will be cropping up may be sinful lusts, or they may not be.

We are so to re-yield and re-surrender ourselves to God that we can, by faith, reckon the old nature dead indeed unto sin.

Do you have enemies? If he or she is a person, that’s not your enemy. Your enemies are the devil, the world, and the flesh. Let’s pray today against those enemies and ask the Lord for strength to fight the good fight of faith. Come share your thoughts on our blog! ~ Devotionals Daily