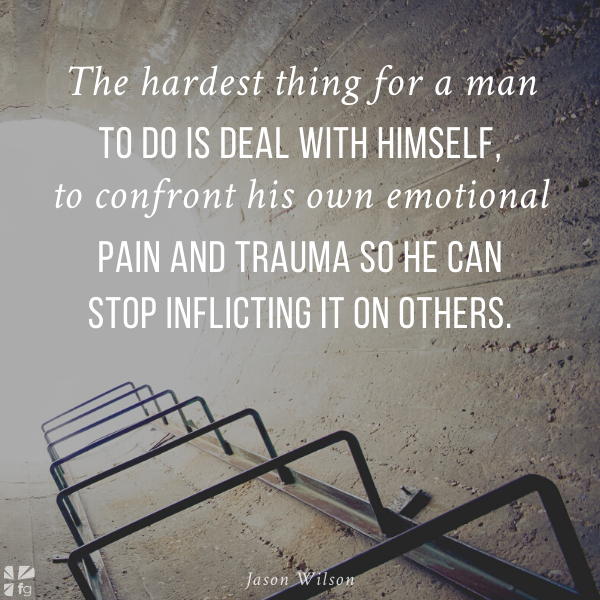 In the United States, the dimensions of a typical prison cell are approximately six by eight feet, encased in steel or brick walls. One solid or barred door locks the cell from the exterior. Those condemned to life inside soon lose touch with the free world outside.

Sadly, there’s another prison cell that holds more men captive than all the industrialized prisons in the world. This cellblock is customized for each inmate, with undetectable walls and a solid “mental door” that locks from the inside —  keeping the hearts of men isolated from society at large.

What’s also extraordinary about this prison cell is that it can only be inhabited by an inmate who voluntarily turns himself in. No warrant, no judge, no jury — just a good man who is tired of fighting to feel. He has suppressed his emotions for so long that he no longer feels them when he does something wrong. In order to keep from hurting others, he subconsciously imprisons himself to a daily life sentence of emotional incarceration. Yes, a daily life sentence because each day when this inmate wakes up, he has an opportunity to walk as a free man, but he’s so disempowered he can’t find his way out.

Unfortunately, due to the lack of safe spaces for men to express our emotions, we choose to stay incarcerated because it’s better than being exposed and humiliated for being imperfect human beings. I say “we” because I, too, was emotionally incarcerated. I started serving my sentence at the age of twelve. Like many boys before they are influenced by this flawed world, I was kindhearted and creative, and I loved helping people. But in the community I grew up in, the hyper-masculine black male was the gold standard, and if you failed to meet that criteria, or at least have that appearance, you’d have to fight every day to keep a pretty girlfriend. Not because you weren’t attractive enough to have a girl but because you didn’t look tough enough to be with her in public.

So, I had to make a decision — either fit in or be an outcast. I chose option one. I went from being on the honor roll to being a regular summer school student. My attitude plummeted, and by the time I reached my teenage years, I had mastered playing the role of a “thug.”

I stopped hanging with my friends who were respectful and honored their parents, and I sought camaraderie with gang members on my block. The things that bothered me before no longer did—I became desensitized to bullying, crime, and misogynistic behavior. Evil had become good and good evil. I started carrying illegal weapons and sometimes would sneak out my stepfather’s gun to impress my new friends. As the rapper E-40’s song advised, I practiced “lookin’ hard” in the mirror every day, and as a result, the joyful smile that had once highlighted my face vanished. Although the thug life always felt like a suit too small for a young man with a big heart, I assumed I had no other choice for survival.

Regrettably, I didn’t realize what a T.H.U.G. truly was — a Traumatized Human Unable to Grieve — until I began to break free from emotional incarceration. Since crying was universally considered a violation of manhood, those who experienced trauma could never release it. The only tears I saw on a man’s face were tattooed — a symbol of death and grief. Until I broke free, I continued to suppress who I really was because living from the heart Yah gave me would have been considered soft by my peers.

Fast-­forward to 1997 and that same boy was in a twenty-seven-­year-­old body. However, this would be the year I would confess with my mouth and believe in my heart that Yahushua is Lord — surrendering my life to the Most High. This conversion set me free from the bondage of sin, but I was still an emotionally incarcerated inmate. Although I made numerous attempts to leave this prison, the fear of being vulnerable was greater than my desire for freedom. Just as a dog returns to his vomit, I returned to my cell day after day. It was not healthy or safe.

Growing up, I never felt comfortable expressing any emotion that wasn’t “masculine.” My father and male family members programmed me to “suck it up.” It’s likely that their fathers and brothers had challenged them to do the same. But hearing this message is like inhaling the fumes from a car’s exhaust pipe — you only have so much time before the poisonous gas creates toxicity in your body and you die.

When I was nine years old, I loved being outside with my puppy named Coby. One day Coby got away from me and playfully ran down my block past a group of teenagers. One of the boys attempted to stomp on Coby’s leash to stop him from running, but his foot landed on Coby instead, crushing his rib cage. They all laughed as I carried my puppy’s limp body home. My mom and I rushed Coby to the vet, but the only option was to put him to sleep. Although my eyes tear up as I type this, I did not cry that day. Instead, the hurt I was taught to suppress became deep-­rooted hatred, and I plotted to severely hurt or kill the teenage boy who had stomped the life out of my puppy.

If I had been taught that crying is normal and healthy for men, I could have cried to release the emotional pain of Coby’s death, and I probably would have had the capacity to forgive — but I didn’t. So, I praise Yah that the boy’s family moved off our block a couple of years later.

Hurtful, disappointing, and traumatizing events happen. They are part of life in this imperfect world. But if we have no outlet for our emotional responses, they begin to stack up on top of one another until we feel buried, overwhelmed, bitter, and resentful.

By the time I became a man, I had mastered repressing my humanity and living only from masculine attributes such as strength, courage, and aggression. I had become emotionally imbalanced — unable to express how I really felt, and constipated with cares but refusing an emotional enema. The hardest thing for a man to do is deal with himself, to confront his own emotional pain and trauma so he can stop inflicting it on others. In many vain attempts to find peace, he’s more likely to keep evading the real problem — himself — and perpetually blame others for what he sees in the mirror. In a spiritual context, man is the head of woman (1 Corinthians 11:3). However, if the head of the house stays negatively affected by past emotional pain and trauma, those underneath his roof will be traumatized as well.

The human traits of caring, compassion, and empathy are beneficial, especially in relationships, and crying provides a healthy release for trauma. Biochemist Dr. William H. Frey discovered that emotionally induced tears contain not only water but stress hormones that are released from our bodies through crying. Ironically, his research also revealed that people with stress-­related illnesses cry less than those who are considered healthy.1

The quality of your life is determined by the quality of your emotions. My emotions were destroying my life and taking my family down with me. When it looked like my marriage was going to end, I knew something had to change in me. I couldn’t bear the thought of losing Nicole and the family Yah had blessed me with.

Although I alone had to take the first step to emotional freedom, the process of attaining the healing I deeply desired for myself and my family could not be achieved unaided. It is written, “Though one may be overpowered by another, two can withstand him. And a threefold cord is not quickly broken” (Ecclesiastes 4:12 NKJV). When I pursued the professional help of Dr. Tim Broe and camaraderie that welcomed vulnerability, I finally learned how to cry like a man, releasing years of trauma and emotional pain that had been suppressed in my heart and mind.

I was finally free to feel! The feelings that masqueraded as anger were now liberated to be expressed without fear of looking like I was mentally fragile or milksop. Now that I can verbally process my emotions, Nicole and I no longer guard our hearts from each other. Instead of holding grudges, we embrace our desire to trust each other’s intent. The peace in our home is tangible. The release of toxic emotions from my childhood empowers me to parent with patience, and my transparency opened the door for my children to be vulnerable with me as well. All men desire and deserve this kind of peace, and we can attain it if we are willing to fight for it. Since the beginning of man’s history, a lack of emotional stability — the ability to confront, conquer, and communicate our emotions with composure — has hindered us from resolutely walking in Yah’s purpose for our lives. Not only are emotions indicators of what dwells in our hearts (Luke 6:45), but if not mastered, they will lead us to death (Proverbs 16:25).

Excerpted with permission from Battle Cry: Waging and Winning the War Within by Jason Wilson, copyright Yah Dabar LLC.

Have you become emotionally incarcerated? What in your life has prevented you from engaging with your emotions? We’d love to hear your thoughts in the comments!