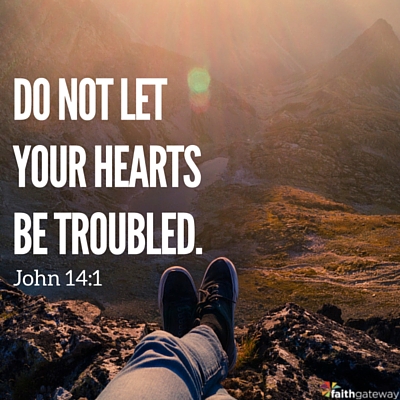 Do not let your hearts be troubled. You believe in God; believe also in Me. My Father’s house has many rooms; if that were not so, would I have told you that I am going there to prepare a place for you? – John 14:1-2

In light of Christ’s forgiveness of us and His provision of all His resources and qualities to us in the present, what should we then believe about the days to come?

Key Questions: What is going to happen in the future?

Blaise Pascal was an inventor, mathematician, physicist, and theological writer in the 1600s. In the mid-1650s, he wrote the Pénsees. Contained in this writing, which ironically wasn’t formally published until after his death, was an apologetic argument that became known as “Pascal’s Wager.” The basis of this thought had to do with a human gamble regarding eternity.

“God is, or He is not.” But to which side shall we incline? Reason can decide nothing here. There is an infinite chaos, which separated us. A game is being played at the extremity of this infinite distance where heads or tails will turn up… Which will you choose then? Let us see. Since you must choose, let us see which interests you least. You have two things to lose, the true and the good; and two things to stake, your reason and your will, your knowledge and your happiness; and your nature has two things to shun, error and misery. Your reason is no more shocked in choosing one rather than the other, since you must of necessity choose… But your happiness? Let us weigh the gain and the loss in wagering that God is… If you gain, you gain all; if you lose, you lose nothing. Wager, then, without hesitation that He is.

As science and theology collided in his heart, Pascal concluded that belief in a God who says He has provided life for eternity makes for a potentially happier life than not believing. The consequences for not believing far outweigh those for believing. He also states each person who lives must make this wager, which will affect how they live and what they decide.

The Christian is on the other side of this dilemma of the soul — now looking to build God’s kingdom for the time spent in eternity, as well as preparing others for His return.

Key Idea: I believe there is a heaven and a hell and that Jesus will return to judge all people and to establish His eternal kingdom.

The central belief about our future and eternity is that when we die, our bodies return to the earth, but our spirits live on. Those spirits go to one of two places — heaven or hell.

Even though I’m a pastor, I honestly don’t like the part about hell. I never have, and I never will. My job, and even the way others perceive us pastors, would be easier if it were not a part of the gospel message. But as we previously discussed about the Bible, we have to take God’s truth as a total work and even accept the areas we don’t like or wish were not there. Of course, those who have received Christ’s offer of salvation by grace no longer need to be concerned about this matter anyway, because He has removed this fear from our future.

Let me emphasize an important point here: When we die and go into eternity, this moment is not the end, as many tend to believe.

Jesus Christ is going to return to the earth, and His first order of business will be to judge mankind. When Jesus returns, He’ll make all things right, and everything will come under the authority of His justice. He will throw Satan and His followers, along with sin and death, into the lake of fire. Christ’s followers will then receive an imperishable, resurrected body, just as Christ now has. Jesus and His people will then reside on a new earth surrounded by a new heaven. For the Christian, this is the future. When we say, “The best is yet to come,” we can confidently mean what we say!

On this great day, God himself will live among us and the original garden of three will expand into a great city of millions.

Then I looked and heard the voice of many angels, numbering thousands upon thousands, and ten thousand times ten thousand. They encircled the throne and the living creatures and the elders. In a loud voice they were saying: “Worthy is the Lamb, who was slain, to receive power and wealth and wisdom and strength and honor and glory and praise!” Then I heard every creature in heaven and on earth and under the earth and on the sea, and all that is in them, saying: “To Him who sits on the throne and to the Lamb be praise and honor and glory and power, for ever and ever!” – Revelation 5:11-13

Key Application: What difference does this make in the way I live?

If we truly believe God has prepared an eternal home for us — a house with many rooms, as Jesus explained in John 14 — then we can and will…

It is important to express here that, even if you cannot write down a name, this exercise is not intended to create any condemnation or blame. But the absence of a name should produce conviction in a Christ follower’s life. If you have none, or maybe just one, then the motivation here is to gain a hunger and a drive to see others come to faith in Christ. There is no condemnation for what has not happened, but conviction toward obedience to see what can happen. If you have no names, don’t wallow and waste any more time; simply rise up and get on a mission.

If, however, you wrote down several names, be encouraged that God is working on your behalf to use your every word and action to bring these people to Him. Keep praying, be inspired, and never give up. Imagine one day each person giving a testimony of how you introduced him or her to freedom into eternity. Also, know you are simply a part of the salvation process in these lives, and God will most definitely use you as you submit to and serve Him.

Paul described well to the church in Corinth his partnership approach of working with Apollos to reach people, while the work of salvation is up to God, the Gardener.

What, after all, is Apollos? And what is Paul? Only servants, through whom you came to believe — as the Lord has assigned to each his task. I planted the seed, Apollos watered it, but God has been making it grow. So neither the one who plants nor the one who waters is anything, but only God, who makes things grow. – 1 Corinthians 3:5-7

Let’s give Jesus’ brother, Jude, the last word as we wait for Jesus to return:

You, dear friends, by building yourselves up in your most holy faith and praying in the Holy Spirit, keep yourselves in God’s love as you wait for the mercy of our Lord Jesus Christ to bring you to eternal life. – Jude 20-21

Excerpted with permission from Think, Act, Be Like Jesus: Becoming a New Person in Christ by Randy Frazee, copyright Zondervan 2014.

Are you fearful about the future? Do you live in anticipation of eternity? Does your daily life reflect the fear or hope you have for the future? Join the conversation on our blog! We’d love to hear from you! ~ Devotionals Daily