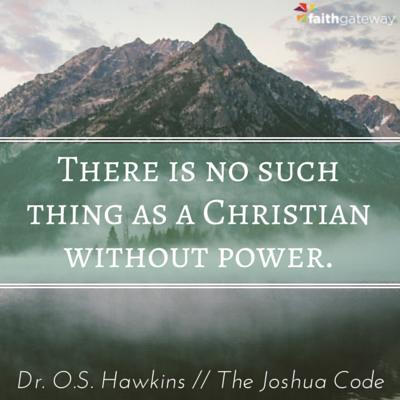 But you shall receive power when the Holy Spirit has come upon you; and you shall be witnesses to Me in Jerusalem, and in all Judea and Samaria, and to the end of the earth. — Acts 1:8

Once, the legendary football coach Vince Lombardi and his Green Bay Packers lost a football game that they should have won handily. However, sloppy play and foolish mistakes led to their unanticipated defeat. The next day at practice, Lombardi gathered his team together. He reached into a bag and brought out a football. He then said, “This, gentlemen, is a football.” It was, in his own indomitable way, a statement that it was time to get back to basics.

When Christ was about to leave His team and return to heaven, He left them — and us — with a challenge to be His witnesses not only at home but also to the very ends of the earth. A few days earlier, on a mountain in Galilee, He had left us the Great Commission:

All authority has been given to Me in heaven and on earth. Go therefore and make disciples of all the nations, baptizing them in the name of the Father and of the Son and of the Holy Spirit, teaching them to observe all things that I have commanded you; and lo, I am with you always, even to the end of the age. — Matthew 28:18-20

His commission to us was explicit: we are to make disciples by leading people to Christ. We are to mark these new disciples through baptism. And then we are to mature them by “teaching them to observe” all those things Christ commanded.

Immediately before His ascension back to heaven, Jesus stood on another mountain in Judea. There He reinforced this Great Commission by calling upon that small group to take His good news to whole nations, not simply to a few locals. It is a basic tenet of the Christian faith that we are all to be His witnesses to a lost and dying world around us. The call to evangelism, to sharing the good news of Christ, is one of the most basic callings of the New Testament. Since the last words of those who leave us are always intriguing and important, let’s dissect this parting challenge from the lips of our Lord and seek to apply it to our lives.

The WHO of Evangelism

But you shall… be witnesses to Me.

This challenge to take the gospel to the world is one Jesus gives to all of us. Two verses earlier, the disciples had tried to sidetrack the issue by asking questions regarding when Jesus would return and restore the kingdom. But Jesus did not say, “You shall be My chart makers or date keepers, but My witnesses — all of you!” None of us is exempt from this basic element of Christian living; that is, to share the good news.

The WHAT of Evangelism

You shall receive what? Power! This is a great need of believers today. We all need power to live the Christian life. Perhaps the greatest difference between the first-century church and the twenty-first-century church is summarized in two words — influence and power. Today we pride ourselves on our influence. We seek to influence the decaying culture around us in various ways. But the early church did not even have enough influence to keep their leader Simon Peter out of prison. They were virtually void of influence with the civil and legal authorities. But the more important news is, they had enough power to pray him out of prison!

Jesus used a word for power from which we get our word dynamite. We need this power to be His witnesses. The book of Acts is the story of a group of men and women just like you and me who — despite all the bigotry and bias of the Roman-ruled world — went out from a little upper room to tell the story of a publicly executed Jew. They did so much with so little. How? They had a dynamite nature about them. They had received power from on high.

The WHEN of Evangelism

When did this power come upon the group of believers?

When the Holy Spirit came upon them. There is no such thing as a Christian without power. When you receive Christ, you have the Holy Spirit. He takes up residency in you. Thus, you have power.

Early in our married life, Susie and I had a new Chevrolet. Well, it was not exactly new, but it was new to us. One morning I went out into our driveway, got in the car, and turned the key; it would not start. Upon raising the hood, I discovered that during the night someone had stolen our car’s battery. That beautiful car was rendered useless. It could not transport me anywhere without a battery to energize it. I think of that car when I read this verse. Many church members get all dressed up and are ready to go out and witness, but they never seem to get started. Why? We are in need of a power outside of ourselves to energize us.

The WHY of Evangelism

The Holy Spirit enables us to be witnesses. This is the very reason why we have power — to be His witnesses. There should be no such thing as a Christian who is not a witness.

We are simply to be Jesus’ witnesses.

People marvel that God entrusted His holy gospel to such common men and women, void of formal training. They were true witnesses. Incidentally, the word translate “witness” is the same word from which we get our English word martyr. These early believers were witnesses (martyrs) in the truest sense. Many of them lost their lives because of their uncompromising witness of Christ.

The WHERE of Evangelism

And here is total penetration: we are to go “to the end of the earth.”

The gospel will never find its final destination until it is shared with every person on the planet.

In thirty short years, those early believers fulfilled Acts 1:8. How? They were empowered by the Holy Spirit and, with singleness of purpose, witnessed His saving grace in Jerusalem (Acts 1–8), in Judea and Samaria (Acts 9–12), and to the end of their world (Acts 13–28). They did not play leapfrog with this commission. They did not pass hundreds of witnessing opportunities in their own city in order to go to the ends of the earth. They began at home, in Jerusalem.

Christ’s gospel is to penetrate the whole world until every religion is confronted, every error exposed, and everyone receives a witness. It is a huge task. But think about those early believers. Their assignment seemed geographically impossible: most people still believed the world was flat. Their assignment appeared to be physically impossible. They had no air travel, radio, television, printing presses, Internet, or any of the modern means at their disposal for communicating the gospel. It seemed legally impossible: they were forbidden by the government authorities to speak in Jesus’ name. And it seemed socially impossible; after all, who would really listen to these scrubby Galileans, so void of culture and class?

Yet, people did listen. They were witnesses through the power of the Holy Spirit. They did so much with so little, and we seem to do so little with so much. The time has come for the modern church to get back to basics, to follow the early believers’ example, and fulfill Acts 1:8 in our lifetime as well.

As you memorize this verse, meditate on the awesome power that resides within each of us who has placed our faith and trust in Jesus Christ alone. It would do us well to also memorize the Great Commission (Matthew 28:19-20). Then get back to the basics of being Jesus’ witnesses by making disciples, marking them by baptism, and teaching them to observe all He has commanded.

Where is your Jerusalem, your home? Where can you begin today to share the love of Jesus with those closest to you? How are you sharing your personal, firsthand experience of the freedom found in Christ? Come join the conversation on our blog! We want to hear how you are fulfilling the Great Commission. ~ Devotionals Daily