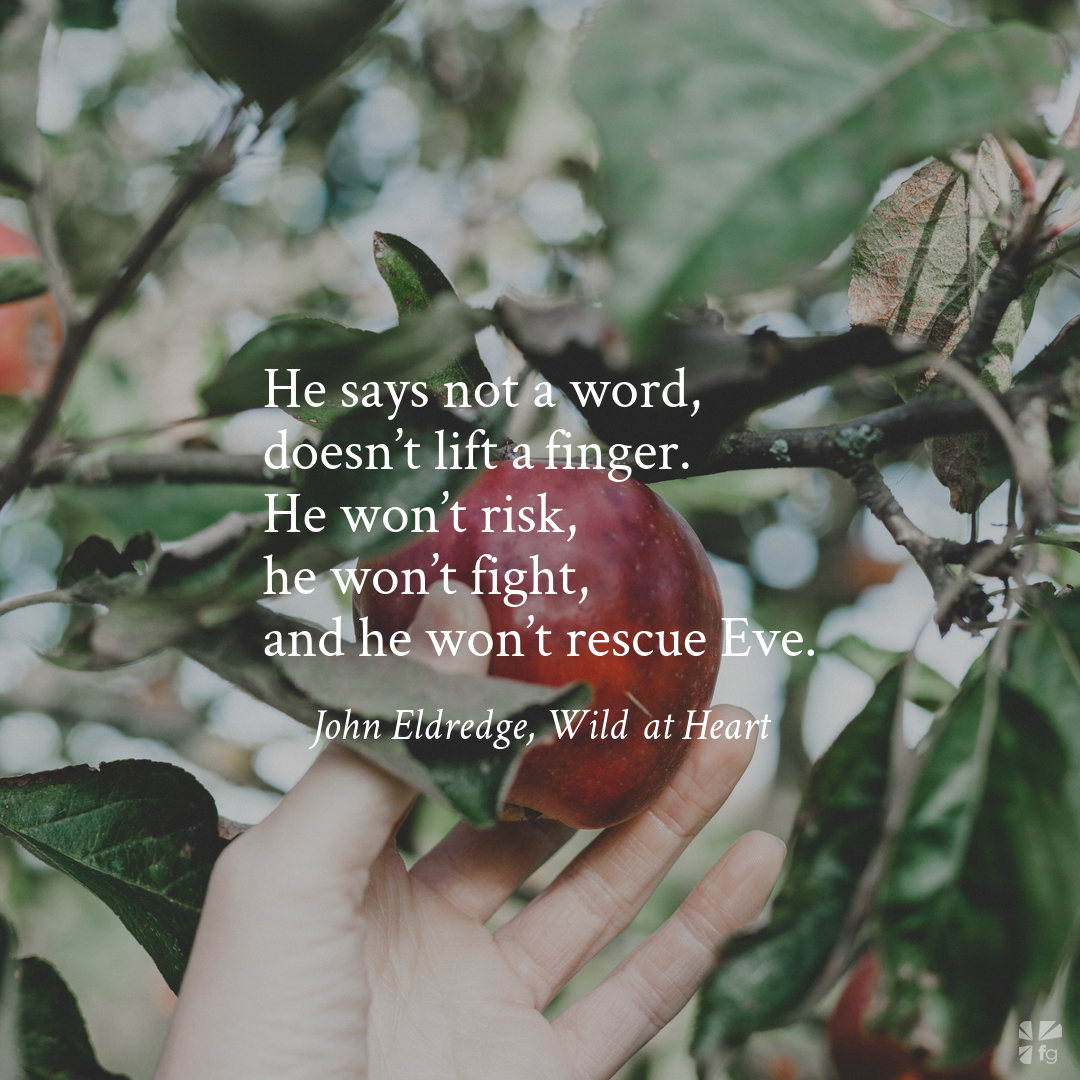 Why don’t men play the man? Why don’t they offer their strength to a world desperately in need of it?

For two simple reasons: we doubt very much that we have any real strength to offer, and we’re pretty certain that if we did offer what we have it wouldn’t be enough.

Something has gone wrong and we know it.

What Is a Man For?

Why does God create Adam? What is a man for?

Adam and all his sons after him are given an incredible mission: rule and subdue, be fruitful and multiply. “Here is the entire earth, Adam. Explore it, cultivate it, care for it – it is your kingdom.” Whoa… talk about an invitation.

The secret longing of your heart, whether it’s to build a boat and sail it, to write a symphony and play it, to plant a field and care for it – those are the things you were made to do. That’s what you’re here for.

Explore, build, conquer – you don’t have to tell a boy to do those things for the simple reason that it is his purpose. But it’s going to take risk, and danger, and there’s the catch. Are we willing to live with the level of risk God invites us to? Something inside us hesitates.

Let’s take another desire – why does a man long for a battle to fight? Because when we enter the story in Genesis, we step into a world at war. The lines have already been drawn. Evil is waiting to make its next move. Somewhere back before Eden, in the mystery of eternity past, there was a coup, a rebellion, an assassination attempt. Lucifer, the prince of angels, the captain of the guard, rebelled against the Trinity. He tried to take the throne of heaven by force, assisted by a third of the angelic army, in whom he instilled his own malice. They failed, and were hurled from the presence of the Trinity. But they were not destroyed, and the battle is not over. God now has an enemy… and so do we. Man is not born into a sitcom or a soap opera; he is born into a world at war. This is not Home Improvement; it’s Saving Private Ryan. There will be many, many battles to fight on many different battlefields.

In fact, Adam’s first and greatest battle is just about to break out, as a battle for Eve. But let me set the stage a bit more. Before Eve is drawn from Adam’s side and leaves that ache that never goes away until he is with her, God gives Adam some instructions on the care of creation, and his role in the unfolding story. It’s pretty basic, and very generous.

You may freely eat any fruit in the garden except fruit from the tree of the knowledge of good and evil. – Genesis 2:16-17

Okay, most of us have heard about that. But notice what God doesn’t tell Adam. There is no warning or instruction over what is about to occur: the Temptation of Eve. This is just staggering. He doesn’t tell him. Good grief – why not?! Because God believes in Adam. This is what he’s designed to do – to come through in a pinch. Adam doesn’t need play-by-play instructions because this is what Adam is created for. It’s already there, everything he needs, in his design, in his heart.

Needless to say, the story doesn’t go well. Adam fails; he fails Eve, and the rest of humanity. Let me ask you a question: Where is Adam, while the serpent is tempting Eve? He’s standing right there:

She also gave some to her husband, who was with her. Then he ate it, too. – Genesis 3:6

The Hebrew for “with her” means right there, elbow to elbow. Adam isn’t away in another part of the forest; he has no alibi. He is standing right there, watching the whole thing unravel. What does he do? Nothing. Absolutely nothing. He says not a word, doesn’t lift a finger. He won’t risk, he won’t fight, and he won’t rescue Eve.

Our first father – the first real man – gave in to paralysis. He denied his very nature and went passive. And every man after him, every son of Adam, carries in his heart now the same failure. Every man repeats the sin of Adam, every day. We won’t risk, we won’t fight, and we won’t rescue Eve. We truly are a chip off the old block.

Lest we neglect Eve, I must point out that she fails her design as well. Eve is given to Adam as his ezer kenegdo – Eve is a life giver; she is Adam’s ally. It is to both of them that the charter for adventure is given. It will take both of them to sustain life. And they will both need to fight together.

Eve is deceived… No longer is she vulnerable; now she will be grasping. No longer does she want simply to share in the adventure; now, she wants to control it. And as for her beauty, she either hides it in fear and anger, or she uses it to secure her place in the world. Fallen Eve either becomes rigid or clingy.

Put simply, Eve is no longer simply inviting. She is either hiding in busyness or demanding that Adam come through for her; usually, an odd combination of both.

Adam knows now that he has blown it, that something has gone wrong within him, that he is no longer what he was meant to be. Adam doesn’t just make a bad decision; he gives away something essential to his nature. He is marred now, his strength is fallen, and he knows it. Then what happens? Adam hides.

You don’t need a course in psychology to understand men. Understand that verse, let its implications sink in, and the men around you will suddenly come into focus. We are hiding, every last one of us. Well aware that we, too, are not what we were meant to be, desperately afraid of exposure, terrified of being seen for what we are and are not, we have run off into the bushes. We hide in our office, at the gym, behind the newspaper and mostly behind our personality.

Most of what you encounter when you meet a man is a facade, an elaborate fig leaf, a brilliant disguise.

Driving back from dinner one night, a friend and I were just sort of shooting the breeze about life and marriage and work. As the conversation deepened, he began to admit some of the struggles he was having. Then he came out with this confession: “The truth is, John, I feel like I’m just [bluffing] my way through life… and that someday soon I’ll be exposed as an impostor.” I was so surprised. This is a popular, successful guy who most people like the moment they meet him. He’s bright, articulate, handsome, and athletic. He’s married to a beautiful woman, has a great job, drives a new truck, and lives in a big house. There is nothing on the outside that says, “not really a man.” But inside, it’s another story. It always is.

A few years ago I volunteered to coach for my son’s baseball team. There was a mandatory meeting that all coaches needed to attend before the season, to pick up equipment and listen to a “briefing.” Their “attitude” (that’s a tame word) was so thick I needed waders. It was the biggest bunch of posers I’ve ever met… outside of church.

Adam falls, and all his sons with him. After that, what do you see as the story unfolds? Violent men, or passive men. Strength gone bad. Cain kills Abel; Lamech threatens to kill everybody else. God finally floods the earth because of the violence of men, but it’s still going on. Sometimes it gets physical; most of the time, it’s verbal.

I know Christian men who say the most awful things to their wives. Or they kill them with their silence; a cold, deadly silence. I know pastors, warm and friendly guys in the pulpit, who from the safety of their office send out blistering e-mails to their staff. It’s cowardice, all of it. I was intrigued to read in the journals of civil war commanders how the men you thought would be real heroes end up just the opposite. “Roughs that are always ready for street fighting are cowards on the open battlefield,” declared one corporal. A sergeant from the same division agreed: “I don’t know of a single fist-fighting bully but what he makes a cowardly soldier.”

The violence, no matter what form, is a cover-up for fear.

What about the achievers, the men running hard at life, pressing their way ahead? Most of it is fear-based as well. Not all of it, but most of it. For years, I was a driven, type A, hard-charging perfectionist. I demanded a lot of myself and of those who worked for me. My wife didn’t like to call me at work, for as she said, “You have your work voice on.” In other words, your fig leaf is showing. All that swaggering and supposed confidence and hard charging came out of fear – the fear that if I did not, I would be revealed to be less than a man. Never let down, never drop your guard, give 150 percent.

Achievers are a socially acceptable form of violent men, overdoing it in one way or another. Their casualties tend to be their marriages, their families, and their health. Until a man faces this honestly, and what’s really behind it, he’ll do great damage.

Then there’s the passive men. Abraham is a good example. He’s always hiding behind his wife’s skirt when the going gets rough. Abraham is a good man, a friend of God. But he’s also a coward. I know many like him. Men who can’t commit to the women they’ve been dragging along for years. Men who won’t stand up to the pastor and tell him what they really think. Pastors and Christian leaders who hide behind the fig leaf of niceness and “spirituality” and never, ever confront a difficult situation. Guys who organize their paper clips. Men who hide behind the newspaper or the television and won’t really talk to their wives or children.

The evidence is clear: Adam and Eve’s fall sent a tremor through the human race. A fatal flaw entered the original, and it’s been passed on to every son and daughter. Thus every little boy and every little girl comes into the world set up for a loss of heart. Even if he can’t quite put it into words, every man is haunted by the question, “Am I really a man? Have I got what it takes… when it counts?”

Excerpted with permission from Wild at Heart by John Eldredge, copyright Thomas Nelson, 2011.

Men, do you question whether or not you have the strength it takes? Are you willing to live with the level of risk God invites us to and enter the adventure with Him, leaning fully into intimacy in relationship with Him for the strength that we need? Join the conversation on our blog! We would love to hear from you!