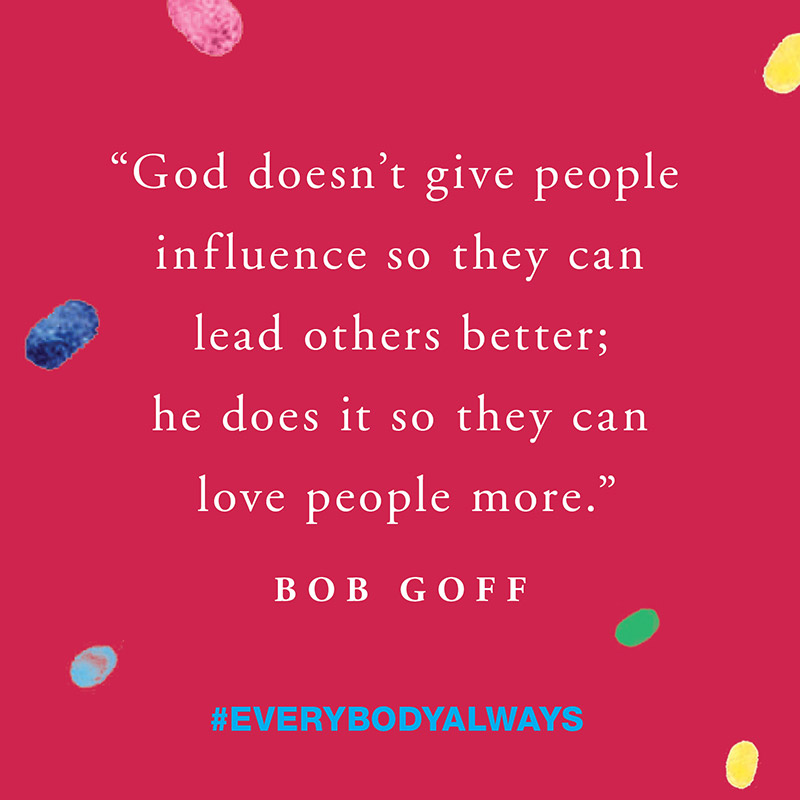 Everybody Always: The Yellow Truck

Don’t tell people what they want; tell them who they are.

When I finished law school, I bought a yellow pickup truck from my dad. It didn’t have many miles on it and was in pretty good condition. I gave him the cash, he tossed me the keys, and I climbed in. As I was pulling out of the driveway, he tapped on the window and I rolled it down. He pointed at the hood and said, “You’ll want to change the oil.” I nodded dutifully and drove home. My dad is a great guy and I love him a lot; but it bugged me that he was still telling me what to do even though I was a grown man. However, I brushed it off as just one of those things dads do.

The next time I drove over to see my dad, we had a great visit. Before I left, he told me again how I’d want to change the oil in my truck. This seemed to happen every time we got together, and I started to see it as a kind of stalemate. I was an adult, and I didn’t want someone telling me what to do. After all, this was now my truck. Each time my dad told me about the oil, I grumbled under my breath that I’d change the oil when I felt like it and not a minute before. Even though I knew my dad was right, I could have had five cans of Pennzoil, a funnel, and a filter in the front seat and I still wouldn’t have done it.

Why? It’s simple. Most people don’t want to be told what they want. It’s in our DNA to assess our environment, take in the inputs, and decide for ourselves what we’ll do. We resist in several ways. Sometimes we send people the message with a sharp word or gesture to create some distance. Other times we resist by being passively detached and polite, while projecting a load of indifference. The reason we do this is as simple as it is complicated. Even when someone’s suggestions aren’t intended to be manipulative, they still feel like it.

My dad didn’t mean harm when he kept telling me I should change the oil in my truck. Quite the opposite. He loved me and knew I wasn’t always mindful of certain things in my life. We both knew car maintenance was one of those things. He knew that people who don’t change the oil in their trucks end up with dead trucks. Because he loved me and didn’t want my truck to die, he told me what I should want to do about it. He was trying to help me avoid something bad from happening, but it backfired in the way it landed with me. The same thing happens to all of us.

The problem with mere compliance is it turns us into actors.

Rather than making decisions ourselves, we read the lines off the script someone we were told to respect handed to us, and we sacrifice our ability to decide for ourselves.

The fix for all this is as easy as the problem is hard. Instead of telling people what they want, we need to tell them who they are. This works every time. We’ll become in our lives whoever the people we love the most say we are.

God did this constantly in the Bible. He told Moses he was a leader and Moses became one. He told Noah he was a sailor and he became one. He told Sarah she was a mother and she became one. He told Peter he was a rock and he led the church. He told Jonah he’d be fish food and, well, he was. If we want to love people the way God loved people, let God’s Spirit do the talking when it comes to telling people what they want. All the directions we’re giving to each other aren’t getting people to the feet of Jesus. More often, the unintended result is they lead these people back to us.

Here’s the problem: when we make ourselves the hall monitor of other people’s behavior, we risk having approval become more important than Jesus’ love.

Another problem with trying to force compliance is it only lasts for a while, usually only until the person gets a different set of directions from someone else. Faith lasts a lifetime and will carry us through the most difficult of times without a word spoken.

Telling people what they should want turns us into a bunch of sheriffs.

People who are becoming love lose the badge and give away grace instead.

Tell the people you meet who they’re becoming, and trust that God will help people will find their way toward beautiful things in their lives without you.

Excerpted with permission from Everybody Always by Bob Goff, copyright Bob Goff.

Being the hall monitor of other people’s lives is exhausting. And, it makes us cranky, crabby Christians who are too busy finger-wagging to actually love each other. Let’s choose words of life for our friends and family to rise onto instead! Come share your thoughts with us on our blog. We would love to hear from you! ~ Devotionals Daily