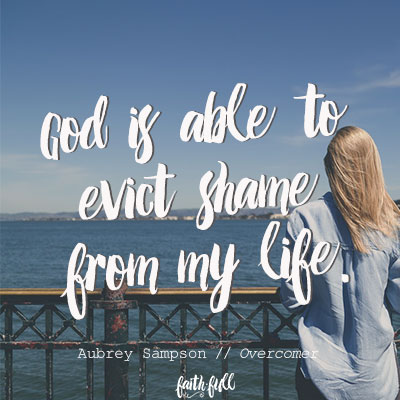 Overcomer’s Truth: God is able to evict shame from my life.

The following list includes some of the first meaningful steps I took in my attempt to surrender my shame to God. It would be amazing if I could tell you something like, “Follow these four easy steps and you too will be free from shame!” As I’m sure you know, overcoming shame is not like that; it’s a journey. And I don’t know if your journey will look like mine. I do, however, know this: as you begin surrendering your shame to Jesus, he is ready and able to evict its control from your life.

Scripture tells us that Adam and Eve were created without shame (Genesis 2:25). Did you catch that? We were created to exist unashamed. But we all know how the story goes. In the garden, God’s beloved children wanted to be “like God” (Genesis 3:5). As a result, Adam and Eve (and you and I) were filled with sin and shame. They attempted to hide that shame by covering themselves with fig leaves. But they couldn’t hide from God.

The consequence of their sin was banishment from the garden, but before they left, God revealed His compassion.

The Lord God made garments of skin for Adam and his wife and clothed them. — Genesis 3:21

He removed their fig-leaf outfits and clothed them with his restorative grace. God lovingly covered Adam and Eve’s shame with his mercy, a foreshadowing of the ultimate kindness that would come to all of us, to all of our sin and shame, in Jesus.

I’m telling you this because shame loves to keep us hidden in our pain. Shame flourishes in silence. But just as it did for Adam and Eve, God’s mercy draws us from our hiding places.

When I first opened up to Kevin that evening in New York, on the one hand, it was like being found after a long game of hide and seek. It felt so freeing to finally be seen and known. On the other hand, it was like being found out, being caught. Often, the big scary thing lurking beneath our shame is a fear of rejection or abandonment. If you are deeply known — if you let them see the real you — your loved ones may think differently about you. They might even discard you. I was so nervous Kevin would be angry that I had never told him my story. I was scared he’d run in the opposite direction.

That didn’t happen, thankfully, but the simple act of talking to Kevin helped me realize something: even if Kev ran for the hills, even if he never looked at me the same way again, it would have been painful, yes, but it would not have diminished my value.

My worth is not found in my husband. And it’s definitely not found in my past. I may be sinful and ashamed, but I am clothed in the restorative grace of God, and my value is found in Him.

Talking to a loved one about the shame you may have been hiding is a powerful step toward experiencing God’s kindness.

Sharing my story with Kevin was the defining moment in evicting shame from my life. God helped me to open up to him, which in turn empowered me to tell some close friends, who encouraged me to talk with a Christian counselor, and now, years later, I share my story with women’s groups, at retreats, and during ministry events. Every time I tell the story of how God set me free from shame, I experience more emotional freedom and have the amazing privilege of watching God set others free from their own shame.

When you bring your story to the light, shame can do nothing but recoil from the brightness.

When Kevin and I returned from our New York City trip, one of the first things I did was to begin untying myself from unhealthy connections to the past. I deleted toxic “friends” from Facebook. I gathered shame tokens I had been holding onto — photos and mementos from past relationships, souvenirs, old journals—and threw them out with the recycling. For years, I had held onto these tokens thinking they had value, that they told the story of me. In truth, they only chained my soul to shameful memories.

I said a physical goodbye to the shame from my past in order to birth new life in my present. I thought about burning these keepsakes in a big bonfire, but I wasn’t sure how environmentally friendly that would be. Plus, I like to imagine that my painful past has been recycled into something cool like will.i.am’s headphones or Banksy’s spray-paint cans.

If there are any unhealthy relationships or reminders of those relationships in your life, destroy them. If you’ve been in a toxic relationship, but you’re hanging on because you are afraid to disappoint that person or because you feel too emotionally attached, let that person go. If you are controlled by anything — if anything in your past or present is inviting shame in — ask God to help you begin evicting it. It won’t be easy, I know, and you won’t be able to do it alone, but shame’s stronghold in your life isn’t worth it. When you refuse to let shame take up any space in your life, it is forced to pack up and move out.

Every summer, Kevin and I spend a week at a family member’s lake house. It’s a place where our boys can be boys — they fish, collect tadpoles, throw rocks into the lake, and run around barefoot and muddy-toed.

One afternoon on a recent trip, I tried to convince the guys to leave the bug collecting for a bit and cruise the lake with me on a WaveRunner. Nobody was interested, so Kevin tossed me the keys. “This is your chance for freedom. Go!”

I ran down to the dock, as excited as a little kid digging through her Halloween candy. I jumped on the WaveRunner and started the engine, anticipating the thrill of the wind in my hair, the sun on my cheeks, and the water spray on my legs.

But there was a problem. I couldn’t get it off the dock. I tried rocking back and forth, but it wouldn’t budge. I climbed off the dang thing and pushed it with all of my might. But no, it wasn’t going anywhere. So I stubbornly climbed back on. Fine. I will just sit here and enjoy the sun. I tried to be content in the moment, but there was an adventure waiting for me and I was missing it. Finally, I ran back to the house and asked Kevin for help. He gladly obliged, pushed the WaveRunner off the dock (he’s so manly), and I zoomed away. I drove around for almost an hour, woo-hooing when I bounded over large waves, laughing when paddlefish leapt across my path, and waving at my boys on the shore as I cruised past.

We miss out on the adventure God has for us when we settle for the spiritual or emotional equivalent of sitting alone on the dock. We might spend years wrestling with shame in our own strength and never experience any real change. That is why God has given us the gift of trained Christian therapists — to help us get off the dock and enjoy the adventure of a healing journey.

When we returned from that New York City trip, I began seeing a wonderful counselor. She not only listened and offered wise guidance; she also prayed for me.

Finding a good professional can help you recover the parts of yourself that years of listening to shame have stolen. You are worth it.

As I yelled at God and knuckled away tears that rainy afternoon in my car all those years ago, he brought to mind a verse that had been among my favorites as a teenager:

Therefore, there is now no condemnation for those who are in Christ Jesus. — Romans 8:1

I had a Bible study leader once who pounded that verse into me—literally.

Satan uses shame as a weapon to demoralize us, and for years, I agreed with his accusations of “Aubrey, you aren’t capable enough. You aren’t a good enough wife and friend. Aubrey, you aren’t strong enough.” But ever since that day in New York City, whenever shame creeps back in, trying its best to condemn me, I condemn it right back — by disagreeing with it. Aloud. (If you ever catch me doing this, you’ll probably think I’ve gone crazy.) If I have those shame-filled thoughts, I will stop and actually say something like, “I don’t agree with that, in the name of Jesus. Jesus says I am enough, in Him.”

Disagreeing with shame refutes it and refuses to give it power.

As you begin sharing your story, severing unhealthy connections, seeking help, and disagreeing with shame, you’ll find that God is bigger, badder, and more robust than shame could ever hope to be. It’s not even fair to make that contrast, because God’s love is so opposite from shame’s condemnation; God frees, while shame imprisons. The two are so contrary in nature they shouldn’t even share room in the same sentence.

Nonetheless, in the form of Jesus Christ, God stood in the same room as your shame. He grabbed it by the scruff of its scrawny little neck, hoisted it out, and slammed the door behind it — forever.

Now it’s up to you to live in the freedom that arrives when shame is forced to go.

If you’ve never shared your story before, what keeps you from opening up to a loved one or close friend? What might be holding you back? If, on the other hand, you feel comfortable with vulnerability, what do you attribute to helping you share with others? The first few times I told my story were so scary I actually shook. But, just like Aubrey you and I can learn to take the steps to evict shame and finally be free! Come share your thoughts with us on our blog. We want to hear from you! ~ Laurie McClure, Faith.Full