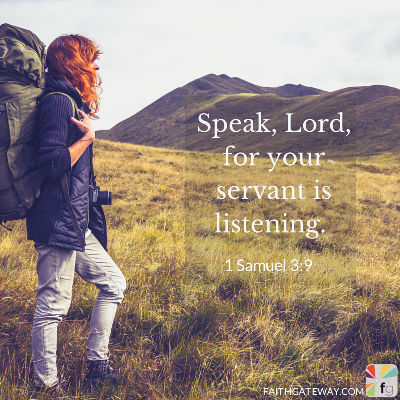 When is the last time you experienced the reality of God’s presence?

Our days are often so hectic that I’m afraid we don’t much find time to seek after the Lord’s presence. After hitting the snooze button too many times, we crawl out of bed, and we’re late before we even get started. The rest of the day is spent catching up, getting things done, and crossing them off our to-do list. By the end of the day, our bodies and minds are exhausted. But little attention has been given to our spiritual side.

If we are not familiar with God’s presence, how will we hear Him when He speaks?

After Hannah weaned Samuel, she took him to Eli and offered a prayer of dedication. Then God began the spiritual change Israel so sorely needed. Eli’s family went about their business, “but the boy ministered before the LORD under Eli the priest” (1 Samuel 2:11). Eli’s sons gradually became more corrupt and audacious, but “Samuel grew up in the presence of the LORD” (1 Samuel 2:21).

Then one night Samuel heard a voice calling out to him. Thinking it was Eli, the boy ran to him and said, “Here I am, you called me.” But two times, sleepy Eli told Samuel he didn’t call him, and he sent Samuel back to bed.

When Samuel came the third time, Eli understood it was the Lord calling Samuel! He told him that if it happened again, he should say,

When Samuel again heard his name called, he did as he was told. Then the Lord spoke, telling Samuel about his judgment against Eli’s family. Eventually Samuel grew and was recognized as a prophet of the Lord.

What the Lord spoke to Samuel was not a new law or doctrine different from that of Moses. God spoke words of warning, direction, and encouragement to Samuel as he spent time in the Lord’s presence. The Holy Spirit did the same to Philip, Peter, Paul, and others in the New Testament book of Acts.

Those who deny our need of the Holy Spirit’s direction and help today because “the canon of Scripture is closed” totally miss the point. It’s not new truth or doctrine He brings.

We already have God’s unchangeable truth in Scriptures, but what we need is the Spirit’s life and power!

The timing of God’s visitation to young Samuel was pretty incredible. During this era in Israel, there was little evidence of Heaven invading earth.

In those days the word of the LORD was rare; there were not many visions. – 1 Samuel 3:1

Religion was a predictable, mechanical affair with priests and sacrifices, but little of the living God.

Superficial religion was corrupting the nation, but the God of Israel rescued His people and turned things around. He can do it again now for us. But it must begin with someone, even a boy, becoming acquainted with and treasuring the presence of the Lord.

In Eli’s day, God was everywhere (as true today), but His manifest or revealed presence (which usually means His blessing) was absent. What’s worse is that no one seemed to miss it. There is no escaping that this is where so many of us are at today in both so-called evangelical and charismatic churches.

The only answer to a lukewarm church or a struggling Christian is the same as ever — the fire of the Holy Spirit!

Excerpted with permission from Storm: Hearing Jesus for the Times We Live In by Jim Cymbala, copyright Zondervan, 2014.

Do you long to hear the voice of God and experience the power of the Holy Spirit as Samuel did? Stop and pray that the Lord would fill you today! Join the conversation on our blog! We would love to hear from you! 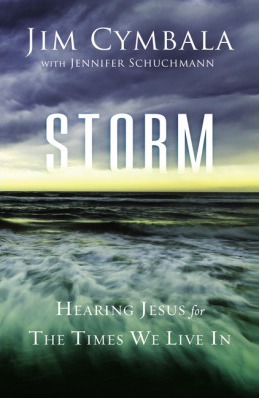