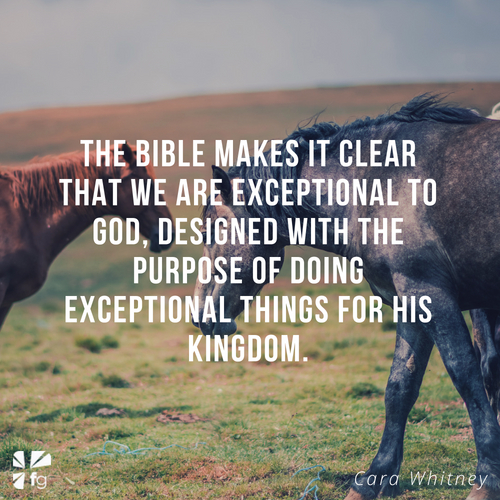 While walking by the Sea of Galilee, [Jesus] saw two brothers, Simon (who is called Peter) and Andrew his brother, casting a net into the sea, for they were fishermen. And He said to them, “Follow Me, and I will make you fishers of men. — Matthew 4:18-19 ESV

My horse has mended a broken heart a time or two. It’s unfortunate that some people would say I own an “ordinary horse.” He’s never accomplished any of the things that would make him a champion in the eyes of others. But to me, he is an exceptional healer.

God has a habit of using what the world views as ordinary to perform His greatest miracles.

Ordinary horses don’t know they’re ordinary, so why would we ever think we are? The Bible makes it clear that we are exceptional to God, designed with the purpose of doing exceptional things for His kingdom.

When Jesus called ordinary fishermen like Peter and Andrew to come and follow Him, He had a plan far beyond what they could imagine. I’m sure they never expected to be world-changers. Maybe they gravitated toward Jesus because they believed He was a prophet, or because He was magnetic. Perhaps they were simply sick of fishing. Who knows what was going through their minds?

However, in a few short years, God would use these two — and others — to spread the gospel of Christ to thousands of people. Peter even became known as the rock on whom Jesus built the New Testament church.

Since God transformed the lives of “ordinary” fishermen and turned them into powerful and effective missionaries for His glory, imagine what He can do for you. Go forth with excitement, in His power, and get ready to be exceptional today.

Lord, thank You for making me anything but ordinary. I, too, want to be a fisher of men. Help me to go forth and do exceptional kingdom work, amen.

A lot of us would describe ourselves as “ordinary”. We mostly have average lives, commonplace jobs, normal messes and difficulties (even if they’re very challenging), and 2 ½ kids. But, God loves to use us to do something extraordinary! We showcase His goodness, faithfulness, and power in our normal selves doing what only He can do. Come share your thoughts on being exceptional through Jesus today! We want to hear from you! ~ Devotionals Daily