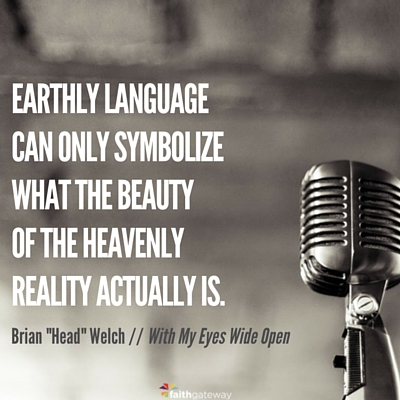 I’ve often wondered why there isn’t some kind of system in place that decides who can and can’t have kids. Think about it. Any moron can have a child. Take me for example. I was an alcoholic meth-head with a train wreck of a marriage who spent more time on the road partying with his band than he did at home playing with his kid. Not exactly what you’d call father-of-the-year material. Granted, I wasn’t a complete idiot. I did help form a successful band, and we did go on to sell almost 40 million albums and win two Grammys. For more than a decade, we were at the top of the music scene. Sold-out concerts. World tours. Award shows. Money. Fame. Professionally speaking, we had it all. Our personal lives, however, were pathetic — especially mine.

But even morons can change. In 2005, after years of living the typical rock-star lifestyle plagued by substance abuse, serious domestic issues, and eventually divorce, I decided to accept an invitation from my friends Eric, Doug, and Sandy to go to church.

I had just moved back to my hometown of Bakersfield, California, to be close to my family. A single dad, I was trying to raise six-year-old Jennea by myself, and I needed help — a lot of help. Thank God my parents were, and still are, amazing. They loved Jennea to death and were extremely supportive, but I was still struggling. And I was tired. Tired of being a meth-head. Of living a double life. Tired of fighting with depressing, suicidal thoughts. I had tried willpower and doctors to help me get clean, but I always ended up with less than impressive results. So when Doug said, “Hey, Brian, why don’t you come to church with us on Sunday?” I decided to go ahead and give church — and God — a try.

That’s when it happened. I had an encounter with Christ that changed my life forever. I didn’t see him with my physical eyes — it was much deeper than that. I saw him with the eyes of my heart, and my spirit knew the exact moment he walked into the room and actually touched me. I was suddenly and completely consumed by a love from another dimension as Christ literally came to live inside of me that very moment. I had heard people talk about Christ residing in a person’s heart, but this was a reality being powerfully demonstrated in my life right then.

It’s pretty impossible to describe heavenly things with earthly language, so just know that what I’m attempting to describe is way better than these words.

Earthly language can only symbolize what the beauty of the heavenly reality actually is.

Everything changed for me in that moment.

I felt God’s divine love flow through me, and that love infused me with an incredible power. It gave me the power to break free from meth and every other addiction I had, and it gave me the strength to walk away from a wildly successful music career so I could focus all my energy on the one thing that mattered more to me than anything else in the world — raising my daughter.

God, in his infinite mercy, had pushed the reset button on my life, and I was determined to make things right. I was clean. I was eating better. I was exercising. I was going to church and developing my relationship with Christ. I had officially left KoRn (very publicly, I might add), and now I was about to spring the huge surprise on Jennea.

You see, the thing Jennea needed the most in her life at that time was stability. Her mother, Rebekah, had fallen into drugs (along with me) and disappeared out of our lives back when my little girl was just a baby, and all Jennea really knew about me was that I wasn’t around very much.

Well, all that was about to change.

One morning, while Jennea was playing with her toys, I crouched down in front of her and said, “Jennea, guess what?”

“What?” “I’m going to quit work so I can be at home with you full time.” Jennea’s eyes lit up, and she broke into a huge smile. “Really?!” she squealed. “Yeah. I love you, and I want to take care of you all the time from now on. What do you think?” “Cool!” she shouted, wrapping her arms around my neck in a hug. I was on top of the world. The look on her little face was worth more to me than all the gold and platinum albums on earth. I was loving every second of it.

This was it. I was going to create a whole new life for us.

So what did I do? I did what all morons do. I did the complete opposite of what I should have done.

When you’ve been a rock star for eleven years and are fresh off of a two-year meth addiction, even when God opens your eyes to experience his love, you don’t automatically gain the ability to always make good decisions. And let’s be honest, I wasn’t the best at making good decisions to begin with. Some of my intentions were good, but even then my timing and execution were horrible.

My first idiotic move was yanking Jennea out of the school she had been attending because I wanted her to go to school at our new church, Valley Bible Fellowship. Then a few months later, I pulled her out of that school and hired a friend to be her nanny and homeschool her. Why? So I could eventually go out on tour later that year. That’s right. The ink in the magazine articles about me quitting KoRn to become a clean-living, Jesus-following, stay-at-home dad had barely even dried, and already I had yanked my daughter out of two different schools and hired a nanny so I could hit the road again.

I’m what you might call an all-or-nothing type of guy. Whatever I do, I do it big — 100 percent — even when it completely contradicts something else I’ve committed to doing 100 percent. Yeah, I know. It doesn’t make a lot of sense. Like I said, sound, logical decision making wasn’t exactly my strongest trait back then.

After I left KoRn, I became convinced that my new calling was to become a solo artist and change lives through my music. So I started working on new songs and basically ran around like a chicken with its head cut off, making plans to record my solo album and prepare for a big tour. I was running on pure spirit-driven adrenaline. Passion pushed logic and common sense right out the window, and for a few short weeks, I was convinced that by year’s end I would start touring full time again — and be there for Jennea at the same time. Then one day I woke up and realized I was being an idiot.

I had made a promise to my daughter, and I needed to keep my word. I still felt called to reach out to people through my music, but for now anyway, the world would have to wait. There was one little girl who had already been waiting for me long enough.

So later that summer I let the nanny go, along with the solo-tour plans, and Jennea and I packed up and moved to Phoenix, Arizona. It was a fresh start. Just the two of us. I bought us a beautiful little three-bedroom house right at the base of a rocky, Arizona desert–looking mountain. It was a great neighborhood with nice families and close to a solid school system. Typical suburbia. Very stable and very normal. In fact, the only weird thing in the whole neighborhood was me.

The first time I took Jennea to her new school, I dropped her off in my humongous Hummer. It was all decked out with a crazy paint job, red flames on the sides, and a lift kit that raised it up twelve inches. That thing was a beast.

When I pulled up in the parking lot, the kids all screamed, “Look at that truck! That thing is soooo cool!”

One kid even asked me, “Are you a rock star or something?” Elementary-school kids are so easy to impress. Still, we were trying to keep a low profile, so I eventually donated the Hummer to the Dream Center in Los Angeles and got myself a slightly more sensible Ford Magnum. I tinted the windows and the thing had really cool rims, so it was a modest-yet-still-very-cool-looking new ride.

After our flashy entrance that first day, though, I decided it might be a good idea to meet with Jennea’s principal and explain our situation. And to my surprise, it turned out that this was by far the coolest principal I’d ever met, which also turned out to be helpful because we quickly ran into a few bumps with some of the other parents.

One day, shortly after meeting the principal, something rather odd yet comical happened after I picked Jennea up from school. It turns out a very troubled mother came into the principal’s office to voice a serious concern. Apparently, there was “a strange man in the parking lot with long hair and lots of tattoos.” Needless to say, she was extremely worried for the children’s safety.

“Was he skinny with long, straight black hair?” the principal asked.

“Yes, exactly!” the woman answered excitedly, thinking she was doing her civic duty by calling out the scary loser in the parking lot.

Sadly, I think she had that conversation a lot that semester.

It’s funny. In my past life, I fit right in. But as a single dad trying to walk the straight-and-narrow, I stood out like a sore thumb. No matter how hard I tried to fit into life in suburbia, I would never look the part.

Watch the Video for With My Eyes Wide Open

Excerpted with permission from With My Eyes Wide Open: Miracles And Mistakes On My Way Back To KoRn by Brian “Head” Welch, copyright Brian Welch.

Come join the conversation on our blog! We’d love to hear from you about the radical transformation Jesus brings!