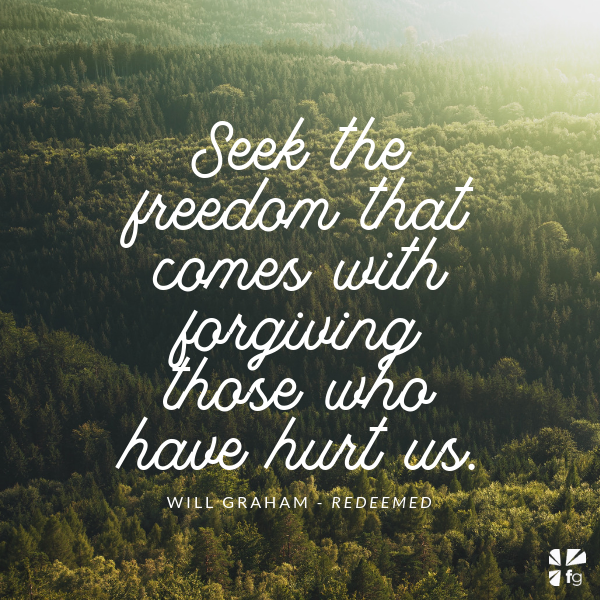 Let all bitterness, wrath, anger, clamor, and evil speaking be put away from you, with all malice. And be kind to one another, tenderhearted, forgiving one another, even as God in Christ forgave you. — Ephesians 4:31-32

Louis Zamperini was an Olympic runner destined for greatness as he prepared for the 1940 Summer Games in Tokyo, only to have them cancelled as World War II enveloped the globe. Rather than winning gold, Louis joined the military to serve his country aboard a B-24, taking part in several successful bombing missions in the Pacific Theater. One fateful day, while on a search and rescue mission in an old dilapidated airplane, Louis’s crew crashed in the ocean. Everybody on board was killed except Louis, his pilot Allen “Phil” Phillips, and tail gunner Francis “Mac” McNamara. The men floated in a life raft for forty-seven days (a record for the longest time adrift without rescue), living off the rare bird or fish they could catch with their bare hands — and all while dodging sharks and the occasional strafing run by Japanese warplanes. Mac didn’t survive, dying along the way.

Eventually Louis and Phil reached shore, but it was by way of an enemy Japanese ship that pulled them from the sea. From there, a bad dream became an utter nightmare. Months of starvation, disease, psychological trauma, unimaginable living conditions, and daily abuse at the hands of sadistically brutal prison guards reduced Louis to a shell of the once-great athlete. The list of regular and ongoing assaults that Louis endured would shock and nauseate you.

One of the few things that kept Louis alive during his horrifying ordeal was the dream of murdering his captors. In fact, one of the men was so cruel that Louis and the other prisoners hatched a plan to kill him, even if the punishment would be their own executions.

Amazingly, Louis survived and made it home to California, only to find himself living in a new prison — one of post-traumatic stress disorder, nightmares, and alcoholism. He was a broken man in a downward spiral.

Why do I share this story? Because something amazing happened. At his wife’s urging, he attended my grandfather’s historic 1949 Los Angeles Crusade, and there he placed his faith in Christ. Miraculously, his nightmares and need for alcohol were gone. He fully and completely forgave his captors, the very people he had dreamt of killing. He even traveled back to Japan to meet with some of them face-to-face so he could share the hope and love of Jesus with them.

“In one bold stroke, forgiveness obliterates the past and permits us to enter the land of new beginnings.” — Billy Graham

The story of Louis Zamperini is one of the greatest examples of forgiveness that I’ve found outside of the Bible.

Nobody could have expected to survive the torture that Louis endured, let alone recover from it. And most people would understand completely if Louis had held a grudge against his tormenters until the day he died. After all, he was treated subhumanly, beaten, and starved within an inch of his life.

It took time and the intervention of Jesus Christ and the gospel in Louis’s life before he was able to fully move forward beyond the suffering he had endured.

I can’t speak for you, but I can tell you that even as a believer and an evangelist, I still struggle with forgiveness even though the injustices that affect me are a far cry from the terror endured by Louis Zamperini.

However, let’s draw inspiration from Louis’s story and seek the freedom that comes with forgiving those who have hurt us. Louis’s life is proof that it can be done, and it’s worth doing.

Are you holding on to anger or pain? What’s stopping you from offering forgiveness?

Lord Jesus, You know the pains and struggles in my life. You know the hurt in my heart left there by others. Help me to forgive them as You have forgiven me. In Jesus’ name. Amen.

Excerpted with permission from Redeemed by Will Graham, copyright William F. Graham, Jr.

Forgiveness, especially when we’ve been deeply hurt, requires supernatural help. It’s not always automatic or instantaneous; it takes time and faith. And, it’s worth it! Come share your thoughts with us on our blog. We would love to hear from you about the journey of forgiveness! ~ Devotionals Daily