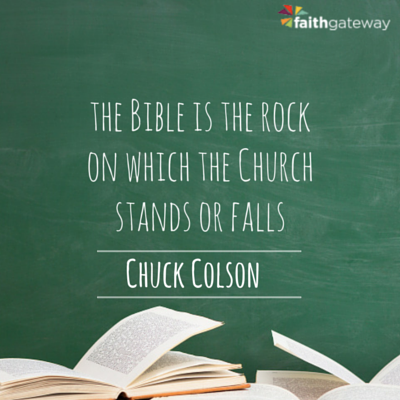 The Bible is the rock on which the church stands or falls. – Chuck Colson [tweet this]

Watch the Preview for The Faith Video Bible Study

There are believers who know the scripture well but fall short in the emotional connection of relationship. There are also those who feel deeply about God with very little biblical knowledge. Scripture isn’t dusty doctrine but rather a love letter straight from God Himself, and Christianity isn’t a set of stuffy, uptight beliefs and propositions but rather an overarching way of the life of joy. God wants to build a foundation of deep relationship with His people that is based on biblical knowledge. The Faith, by Charles Colson, is a six-week study that helps build that strong foundation.

We invite you to enjoy The Faith Bible Study with your small group or on your own. ~ Fred Bittner, FaithGateway Bible Study

Watch The Faith Video Lesson One

Given Once, For All

Christianity is a worldview — a system of life and thought

There is a God and God is

God has given us truth and it is knowable

God has revealed himself in the Scriptures

Everywhere, Always, by All

Most professing Christians don’t know what they believe, and so can neither understand nor defend the Christian faith — much less live it. Many of the things we tell non-believers do not represent real Christianity. And most nonbelievers draw their impressions of the Christian faith from the stereotypes and caricatures that popular culture produces. The challenge of anti-theism and radical Islam could not come at a worse time for the Church, because most Christians do not understand what they believe, why they believe it, and why it matters.

It may seem odd to rely on the ancient roots of Christianity at a time when progress is so exalted. But progress does not always mean discovering something new. Sometimes it means rediscovering wisdom that is ancient and eternal. We all find our identity in our roots. Visit nearly any family and you’ll see pictures of grandparents and earlier generations. People go to great lengths to trace their ancestry. Adopted children seek their birth parents. Where we come from tells us who we are, and so it is in the Church.

We call the core beliefs that have united Christians through the ages orthodoxy, or “right belief.” Understanding this faith, once entrusted for all, is critically important today, for we live in a time when Christians and the beliefs they uphold are under assault.

If we are to face today’s grave threats to the Christian Church, we must look across the sweep of Christian communions, Protestant, Catholic, and Orthodox, to find the original consensus of the early Church; that is, those essential elements of our faith that, from the beginning, all true Christians have believed.

Everybody has a worldview… some basic premises that you think about life and you say, “Ah, that informs what I do and how I see things.” Christians must see that the faith is more than a religion or even a relationship with Jesus; the faith is a complete view of the world and humankind’s place in it. Christianity is a worldview that speaks to every area of life, and its foundational doctrines define its content. If we don’t know what we believe — even what Christianity is — how can we live it and defend it? Our ignorance is crippling us.

One of the Christian faith’s most persuasive contemporary critics is Sam Harris, who articulates the powerful doubts that we all recognize in our moments of soul searching. In his book Letter to a Christian Nation, he wondered what God was doing when hurricane Katrina devastated New Orleans and how sad it was that people there died praying to an “imaginary friend.”

My thoughts have been as dark at times. During one of those times I was at a friend’s home in western North Carolina. One morning I got up early and was greeted by the magnificent sight of the Blue Ridge Mountains rising out of the mist, the sun throwing the shadows of the lower peaks against the higher summits, the foliage glistening with dew. There was no explanation for what I was seeing — the intricate details of nature, genuine beauty – apart from a creator God. This could not be an illusion, an accident, or the result of some random process. While the other planets are sterile and lifeless, this one throbs with life and beauty. God is. I knew God exists at a deeper level than I had ever known anything in my life before. His existence didn’t depend on my feelings, either. I might feel desperate, weary of praying, ready to throw in the towel, but God still is. There is no other explanation for reality. What I saw, I realized, was the answer to what I had thought were unanswered prayers.

Simply put, the Bible is the rock on which the Church stands or falls. It is the ultimate authority for all Christians — Protestants, Catholics, and Orthodox alike. It is revealed propositional truth. The texts were written by men under the inspiration of the Holy Spirit, and thus are revealed to us. It is propositional because it makes a series of claims. It is truth because it is from God, and thus must certainly be true; God could not have spoken something that is not true because that would be contrary to His nature. This is why all true Christians take the Bible as their ultimate authority — and why no Christian should ever be hesitant to defend it.

The question of truth — of a common and knowable reality that exists independently of our perception — is the great fault line of Western culture today. The dominant point of view dismisses the idea. The fastest way to provoke scorn from most university professors is to use the words reality, truth, and most of all absolute truth. Why does this view of truth breed such animosity? Because rebellious human nature resists truth’s claims. If something is really true, it must be true not just for the person saying it but for the person hearing it. And the fact is, we don’t want to obey a higher authority from any quarter — especially what purports to be from God — for fear it will impinge upon our personal autonomy. We cling to the idea that we create our own truth.

What Jesus teaches is that reality is not what we subjectively make of it, or what our culture may believe. There is objective truth, and we are able to apprehend it with our senses. We are not a dream in the mind of God, an illusion, as Eastern religions and some New Age philosophies teach.

What’s really at issue here is a dramatic shift in the prevailing belief of Western cultural elites; we have come into a postmodern era that rejects the idea of truth itself. If there is no such thing as truth, then Christianity’s claims are inherently offensive and even bigoted against others. Tolerance, falsely defined as putting all propositions on an equal footing — as opposed to giving all ideas an equal hearing — has replaced truth.

This distaste for doctrine has led some postmodern Christians to adopt the mantra, “We want deeds not creeds.” But wait a minute. For over thirty years, the movement known as Prison Fellowship has been taking the Gospel into the prisons, demonstrating the transforming power of Christ to turn the most reviled sinners into saints. No one would argue that these have not been worthwhile deeds. But if the creeds we believe in are false, then our efforts have been totally misplaced; we cannot be sure that our deeds, however noble, are really good. It is the creed that makes us carry out the deed — that keeps us going into the most rotten holes in the world — and gives us the message we preach. The same is true of any Christian movement based on faith.

We would love to hear your small group of personal answers to Chuck’s questions about The Faith Bible Study! Come join the conversation on our blog!