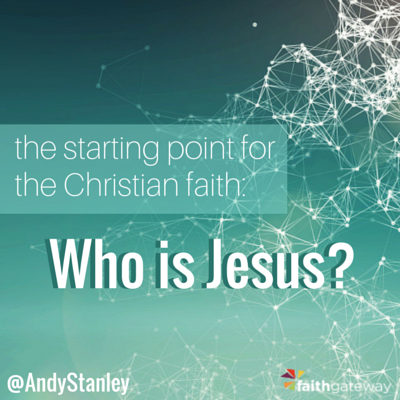 Nearly every home has a tape measure stashed in a toolbox, or junk drawer. The tape measures in increments from as small as 1/32 of an inch, or as many feet as the tape will stretch. Many tape measures even give metric measurements as well.

It doesn’t matter how many feet or how few inches are measured, they all have one thing in common. Every measurement has a starting point. The angled hook at the beginning of the tape represents the starting point. Without the hook, measurements become more difficult, and often requires help from a second person. However, place the hook on a nail, or the corner of a wall (starting point), and we are free to move to the other end of the object being measured.

Andy Stanley addresses some of the starting points of life. He helps us to recognize important starting points in our lives. By hooking our lives to that starting point, we will always know where we are. Grab your tape and your Bible, and join the study Starting Point. ~ Fred Bittner, FaithGateway Bible Study

Faith Has a Starting Point

If you grew up in a non-religious family, your first encounter with religious faith may have occurred at a neighbor’s house or in school or it may be occurring right now. You may have been intrigued by the faith of others, or you may not have given it a second thought. Either way, you were aware that their experiences were different from yours.

If your faith began during childhood, you were probably taught some basic religious tenets: God is good. God rewards good and punishes evil. God hears your prayers. God loves you. These simple truths made sense in a world where the tooth fairy and Santa Claus made regular house calls. You may have had questions. Perhaps you even doubted at times. But the adults you trusted seemed confident in their faith, so you remained committed to yours — for the time being.

Fast-forward a few years and you found yourself confronted with adult realities for which childhood faith had not prepared you. You found yourself wrestling with questions such as: If God is good and all-powerful, why doesn’t He do more to prevent the bad things in the world? Why does so much evil go unpunished? Why does prayer seem like such a shot in the dark? Why do bad things happen to good people? Why are some religious people so judgmental and mean? Why don’t science and religion line up? Why does it seem that smart people are less religious?

Even as your faith shrank or your doubt solidified, you may have run into some “grownups” that had faith. Strong faith. Faith that didn’t resemble a child’s belief in the tooth fairy or Santa Claus. They maintained what looked to be an unshakable confidence in God in spite of what they saw or experienced. They didn’t pretend to have all the answers. In fact, they didn’t pretend at all. They were honest and hopeful. They acknowledged the complexities of the adult world, but their faith remained strong.

Perhaps it was their faith that caused you to begin doubting your doubt.

If so, you are in the right place. That’s exactly what this guided conversation is about. It’s why we call these gatherings Starting Point. If you grew up without a faith framework or you’ve just begun a relationship with Jesus, this may be a literal starting point for you. If you lost faith along the way, you may see our time together as an opportunity to restart your faith. Regardless of where you are, we are honored that you have chosen to participate for the next eight weeks as we explore what it looks like to develop faith that doesn’t merely survive the real world but thrives in it.

Most Christians grow up being taught that regardless of the question, the answer begins with, “The Bible says.” In childhood, this is enough. If God wrote a book, there is no reason to challenge what it says. But for some of us, “The Bible says” became problematic somewhere north of our eighteenth birthdays. Truth is, for faith to be unshakable, the foundation must be more substantial than a book of miracles written thousands of years ago. Right? A storybook may be enough to birth faith in a child. But a storybook is not enough to sustain faith in an adult. But if we dispense with the Bible, where do we go for our starting point?

Where does faith begin?

As you probably know, the Bible is divided into two parts: the Old Testament and the New Testament. The New Testament contains the teachings of Jesus along with the narratives surrounding his birth, life, and crucifixion.

There are four accounts of Jesus’ words and works. These ancient documents are referred to as the Gospels. While most agree that the Gospels were written during the years immediately following Jesus’ life, they were not collected and published together until many years later. The term “New Testament” was first used around AD 250 in reference to one of the earliest collections of sacred Christian texts. Despite the fact that there was no Christian Bible, hundreds of thousands of men and women became followers of Jesus in the first three centuries. The starting point of their faith was not “The Bible says” or “The Bible teaches”; it was something else entirely. And we’re convinced that something else serves as an adult starting point for faith in our generation as well.

The apostle Paul traveled around the Mediterranean planting churches in the first century. He found himself with some time to kill in Athens. He met a group of philosophers who gathered on a regular basis to examine new ideas. They were looking for a framework that made sense of the world. They knew more than most, but continued to pursue greater certainty by discussing the latest ideas. Like most people in their culture, they believed in a pantheon of gods. But they willingly acknowledged the gaps in their knowledge. They even erected an altar inscribed “To an unknown God.” They were covering all their bases. If a new god arrived on the scene, they were ready for him. Or her. Or it.

Paul viewed this just-in-case altar as an opportunity to introduce his new friends to the central message of Christianity. He couldn’t begin his presentation with “The Bible says” because there was no New Testament. In fact, at this point in history, none of the four Gospels had been written. So Paul drew their attention to the fact that curiosity regarding God was universal. He argued there was something in every man and woman that wonders, questions, and seeks. He went on to say that God actually wants to be found… so much so that he entered creation in the form of a man — Jesus. This God-man came to explain what God is like and to reconcile humanity to himself.

This was not an easy message for Paul’s skeptical audience to embrace. They had never heard of Jesus. The notion of a single god was difficult enough. The idea that this God had entered creation in the form of a man was outside the realm of possibility for most of Paul’s Athenian audience. But one thing was certain. Paul was not asking them to believe a book. He never mentioned a book.

The name that was so new to the Athenians is one we have all heard today. Jesus is the central figure of the Christian faith. Interestingly, other faith traditions claim Jesus as one of their own as well. But Jesus’ influence goes beyond religion. It is difficult to find anyone anywhere who does not respect Jesus. His teachings have shaped the consciences of nations. This Jewish carpenter, who never traveled more than a hundred miles from His birthplace, never wrote a book, never raised an army, and was a public figure for less than four years before being crucified by Rome, remains the subject of endless conversations, debates, books, movies, and controversies.

Who is He? What makes His life and teachings so unique? What sets Him apart? Why do millions of people from cultures all over the world continue to follow Him?

It’s true that Jesus’ teachings represented a radical departure from the established norms of His day. His version of generosity and compassion went head-to-head with the commonly held assumption that it was a waste of time to do anything good for someone who didn’t have the means to return the favor.

He insisted that His followers pray and give privately while other religious leaders made a great to-do of praying and giving to be seen. While conventional wisdom said to love your friends and hate your enemies, Jesus taught His followers to love their enemies and to look for opportunities to serve them.

But it wasn’t what Jesus said that ensured His teachings would survive the first century. It wasn’t His insight, His parables, or even the events surrounding His death that catapulted His fame and renown into the next generation and the generations to follow. In fact, Paul didn’t even mention Jesus’ teachings to the Athenians. The reason men and women like the apostle Paul risked and eventually sacrificed their lives for Jesus was not what He said before He died but what happened afterward. Three days afterward, to be specific.

Jesus rose from the dead.

Come share your answers on our blog! We’d love to hear from you!