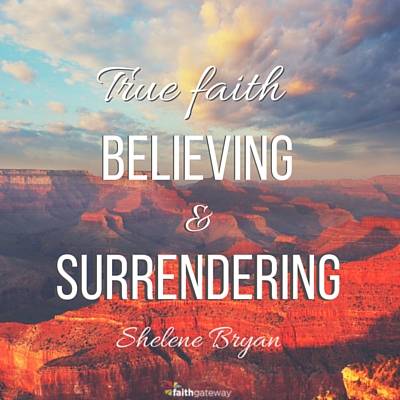 I read that high-wire-walking legend Nik Wallenda planned to walk a tightrope across the Grand Canyon.

I told Brice I did not want to miss the excitement of the live television event. So on June 23, 2013, my family and I were glued to the television when Nik crossed the Grand Canyon. He had no net, tether, or safety harness, just a two-inch steel cable stretched between the canyon walls far above the rocky floor. The distance was greater than the height of the Empire State Building.

Nik Wallenda had agreed to wear microphones and to be recorded during the live crossing. Not long after the hazardous event began I was expecting the TV network to bleep out what he was saying — not because it was a swear word or other profanity, but because he was crying out in prayer to his Creator. This is what the microphones picked up: “Praise You, God! Praise You, Jesus! Help me to relax, Lord… You’re my King, You’re my Protector, You’re my Shield, You’re my Strength, You’re my Lord.”

When Nik realized the wire had become slick from blowing dust and the winds had picked up to thirty miles per hour, his prayers intensified. Suddenly the cable began to shake. If he proceeded, it would only continue to get worse. His grandfather had died from a high-wire fall in 1978. That stunt had ended in tragedy when the cable began to shake — just as this cable was shaking now. Nik stopped and crouched down, giving time for the cable to quiet the vibration. “Thank you, Lord. Thank You for calming that cable, God.”1

One step after another, the twenty-two-minute, fifty-four-second crossing seemed to last an eternity. But as Nik began to draw near to the other side of the canyon he began to run on the wire. The last ten steps were an adrenaline-fueled dash. When asked later about his prayer on the high wire, he said, “My life is based on my faith. I guess the biggest role that it plays is that if I do fall and die I know where I’m going.”2 Unlike Nik Wallenda, most of us don’t put ourselves in situations that require real faith. You will know you are seeking the face of Jesus when you are so far out of your comfort zone that you can’t help but cry out to Jesus as he did fifteen hundred feet above the canyon floor.

You see, faith is more than just believing and saying you believe. Satan himself believes that Jesus Christ was raised from the dead. Satan was there and witnessed the resurrection himself. He believes it happened because he saw it.

Just believing the right stuff is not enough. True faith is believing and surrendering to that belief — to the point that you’re willing to step off the edge of safe and sure.

True faith is not just lip service. It’s not just “magic words” said in a prayer. It’s surrendering to God and allowing the Holy Spirit to invade us and live out love through us.

True faith is offering yourself as a living sacrifice to your Creator and allowing your life to be used for His purposes.

Heavenly Father, I believe in You and in Your trustworthiness and Your perfect track record. I surrender my life to You not just with my words, but with every step I take. Give me the courage to get out of my comfortable bubble and serve others in Your name. Give me the strength to put myself in situations where I need to cry out to You for help. Let Your Holy Spirit invade my heart and live out a life of love through me. Amen.

When Wallenda crossed the Grand Canyon on that windy day, it was a “can’t-look-but-can’t-take-my-eyes-off-it” experience. He was in serious, death-defying trouble and yet full of faith and thanksgiving in the goodness of Jesus who was with him every step of the way across that tightrope. That’s the kind of faith — way outside of our comfort zone — that Jesus calls us to in service to others for His name’s sake. Are you stepping out of “safe and sure” for the Kingdom of God? Come share with us on our blog! We want to hear about your faith walk! ~ Devotionals Daily