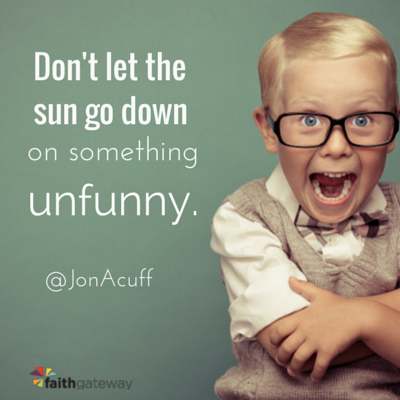 Fake Laughing Out of Christian Love

We’re supposed to do this, right?

As Christians, the compassionate, Christlike thing to do when someone says something unfunny is to pretend it is funny and fake laugh your head off, right?

Or maybe what we’re supposed to do is be the truth in this situation. To not lie, and to honestly say, “I have to confess, my Christian brother, your joke about chili is not funny, and I’ve heard you say it seventeen times since I joined this small group, and it has progressively gotten less funny with each telling, which I did not anticipate being possible when I heard it the first time.”

It’s quite the pickle. I’m unaware of a scene in the Bible that gives us clear direction on this problem. I can’t recall Jesus ever saying to Andrew, “I forgive you, but I can’t abide by the lack of humor found in your ‘Why’d the rooster crow three times? ’Cause Peter crossed the road’ joke. That’s not funny.”

But even though Jesus might not have addressed joke quality head on, I do think you can make a case both for and against fake laughing using some of the fruits of the spirit in Galatians 5:

Fruit of the Spirit: Love

As a Christian, you’ve got to reflect loving truth back to people.

What if your husband tells you an unfunny joke at home, you fake laugh, he thinks it’s funny, and then he tells all his friends later and they don’t laugh. He’s embarrassed, you’ve denied him a “joke improvement opportunity,” or JIO as we call it at the Acuff house, and all his friends had to experience something unfunny. Everyone loses in that situation. Don’t fake laugh.

Fruit of the Spirit: Peace

It was a passing comment. It was a quick joke and the conversation has already moved on. Let it go. It walked into the room briefly, fell on a banana peel of unfunny, and was dragged back into the “closet of no laughter” before you even had to stare at it for very long. Keep the peace. Fake laugh.

“Oh, was that a joke?” is the worst thing you can hear someone say after you’ve unleashed what you thought was hilarious. (“You’re fired” is actually worse, but the first one happens far more often.) Help your friends so they never hear this question.

Be honest with each other. Don’t fake laugh.

Fruit of the Spirit: Patience

They’re going to get funny. They’ll get better. Have patience, have patience, don’t be in such a hurry. (You just got Psaltyed, which is what I’m now saying instead of “You just got served!”

Oh, the irony of an unfunny, obscure joke in the middle of an essay about unfunny jokes. I’m going to rip the fabric of time if I’m not careful here.) Trust in the Lord and he’ll renew your friend’s mind and sense of humor. Have patience. Fake laugh.

Life is very, very short. The only day we’re given is the one we’ve got. Every rose has its thorn. (Poison lyrics? Really?) In marriage, they say never go to bed angry. Same logic applies here. Don’t let the sun go down on something unfunny. Be patient in how you break the news to them, but don’t let another moment go by that could be funnier if you were only a little more honest.

Fruit of the Spirit: Self-Control

If you can’t actually bring yourself to guffaw out loud, at least have the self-control to say what fake laughers the world over say when they don’t want to hurt someone’s feelings: “That’s funny.” If anyone ever says that to you, they didn’t think what you just said was funny, because if they did, they would have just laughed instead. Since most people don’t realize that, show self-control and gentleness and all the other fruits of the spirit and say, “That’s funny.” Fake laugh.

Sarah didn’t fake laugh when she heard the Lord tell Abraham they were going to have a kid even though they were both in their nineties. She laughed out loud in Genesis 18:12 and got busted by God in perhaps what is my favorite random scene in the Bible:

Sarah: I did not laugh.

God: Yes, you did laugh.

Is that what you want to happen when you get to heaven?

God reviews a highlight film of your life that shows you fake laughing over and over again while you just shake your head and say, “I didn’t fake laugh.” And he says, “Oh you fake laughed, you did fake laugh.”

Excerpted with permission from Stuff Christian Like by Jonathan Acuff, copyright Zondervan.

Jon Acuff humorously notes that we sometimes offer an obligatory laugh even when something isn’t funny. Have you ever offered a fake laugh out of Christian love? Or maybe been on the receiving end? Join the conversation on the blog. We would love to hear about it!