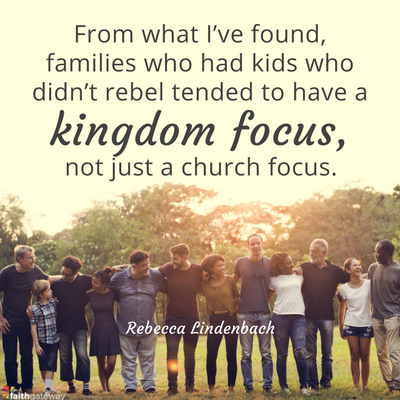 Jason came from what looked like the perfect Christian family. But, Jason never made his faith his own.

Jason’s parents were heavily involved in their church. They all pitched in, with his parents running the youth group and Jason on drums with the worship team. They went to all the youth rallies and never missed youth group. And Jason loved church during high school — he had friends there, there was free pizza at youth group, and he loved being in the worship band. But when he left for college, he simply stopped going to church. When his mom asked him why he hadn’t gone to church his entire first semester at school, he just shrugged. “I don’t know,” he said. “I still believe in God. I just don’t really think I need to go to church. What’s the point?” He had walked out the church doors and never looked back.

As a millennial, I see this phenomenon play out over and over again with my generation, and I think it’s because the focus of the modern church doesn’t seem to mesh with millennials’ values.

I saw a tweet once that said, “If we were in the middle of the zombie apocalypse I swear my generation would start a Zombie Rights campaign.” And I think that’s completely accurate. It’s why many millennials are for gay marriage but are also against abortion, despite the two seeming to oppose each other. To millennials, it’s a justice issue, not a moral one: everyone should have the right to love, and everyone should have the right to life.

On top of that, we live in the social media age, where with just a click you can see what’s going on anywhere in the world. The world is more accessible now than it ever was before, and we who have grown up with that access are very aware that the world is so much more than just our neighborhoods — perhaps more aware than any generation has been before. The world has shrunk.

So when a family focuses all its attention on a church that’s in their neighborhood and helps their community, it seems a bit shallow, to be honest. It’s fun, and it’s a lovely experience, but it seems irrelevant in this global age. It’s as if you’re paying yourself dues — you’re volunteering somewhere that’s going to help you in the long term, but doesn’t seem to do anything for the world as a whole. Yes, many churches have a mission focus, and that should not be minimized. But often the mission focus includes giving to missionaries and having them speak once a year at the church to raise more funds. It can be hard to see how an individual church is making a real difference in the world. So for someone like Jason, as long as you’re a good person, church doesn’t really seem that important in the grand scheme of things.

Interestingly, many of the families who had kids who never thrived had thrown themselves into serving in the church, as had their children. But even that didn’t seem to be enough for their kids to make their faith their own.

From what I’ve found, families who had kids who didn’t rebel tended to have a kingdom focus, not just a church focus.

Their primary dedication was to furthering God’s kingdom on earth, and they took it beyond the four walls of their churches.

This was always present in my family. I started tithing when I was three, when I started receiving an allowance for doing chores. Every Christmas, beginning when I was five or six, my aunt Allee would send us Harvest of Hope catalogs with a sum of money, and Katie and I got to choose how we were going to spend that money combined with our tithing money from the year. Usually we chose to give a family a goat or some chickens.

My parents wanted me to be exposed to Christianity across the world, and I’ll tell you: singing about God’s goodness with three hundred children who have all seen more suffering than I could imagine in a lifetime is humbling. And seeing how God had transformed their lives made me even more dedicated to making my faith my own. I wanted that transformation for myself.

After our 2006 and 2007 trips to Kenya, my parents wanted to go and live there for a year to work at a local hospital. They told Katie and me that this was something they felt strongly about and that it was a way they thought our family could really help spread God’s love. They told us to pray about it and see if we felt called to it too.

As Katie and I grew older, we continued living out that mission focus. Katie started a YouTube channel so she could provide encouraging Christian entertainment. I started blogging to help challenge people to take their faith seriously. We found our own causes in adulthood because we were so used to working for something greater, it just seemed natural.

Many kids who didn’t rebel had this greater focus throughout their childhood. Most had stories similar to Katie’s and mine, where their families were heavily involved in overseas missions, or where they went on mission trips on their own in high school. Others did more community outreach, where their families were purposeful in inviting their non-Christian friends over and showing them love and acceptance. Some of them adopted children from overseas or became foster parents. Still others, like Joanna’s family, chose a missions lifestyle. (Joanna’s story is shared in chapter 5.)

Joanna’s family attended a missions-focused church in the heart of Pittsburgh, but most of its members commuted in from the suburbs. “Our church was like an island in the inner city,” explained Joanna, “and although they had many members from the suburbs, they couldn’t seem to reach the people living downtown. One day, though, my parents went to a Christian conference and my dad felt called to move to the inner city to help breach that gap — not by acting as a missionary in the traditional sense, but simply by being a presence in the community.

“My dad felt very strongly about moving to the inner city,” Joanna explained, “but my mom, although she knew Dad’s calling was very real and for the whole family, hadn’t felt it herself quite yet. So she prayed that God would reveal that calling to her too. As they started looking for houses, Mom wanted a historical home with a big yard, and for it to be a stand-alone property. That was hard to find in the inner city.

“After intense searching for a month, Mom couldn’t find anything that fit her criteria and decided to surrender her list, since she knew that obeying God’s call was more important than having her dream home. The very next Wednesday she found the house, and it was everything she wanted and more. By Thursday she had shown it to Dad and me; they signed the papers on Friday and sold our old house on Saturday for the exact amount they had bought the new one for.” So when Joanna was two and her little brother was just a baby, they moved into an old historical house in the middle of the inner city.

“My mom, holding back her laughter, would just tell us, ‘No, sweetie.’

“‘Why not?’ we’d ask. “‘Well, honey,’ she’d explained, ‘that’s a place people go to sin.’” Joanna laughed. “Yeah, we were definitely not part of the culture of our neighborhood.” Joanna’s parents wanted to include their children in this missions-based lifestyle. One of the ways they did that was through the school they chose. Her parents wanted their children to go to a school that was strong academically but was also in the city. This school helped the inner city become the children’s normal and gave them the opportunity to be included in ministry. As well, Joanna’s parents were purposeful in talking with their children about their calling.

“We kids truly felt that God had called us to the inner city,” said Joanna, “and our family was really fun, so we didn’t mind standing out. I grew up with the stories about how God had provided our house, and my parents openly talked to us about the importance of ministering in diverse communities, and they often reminded us that diversity included socioeconomic diversity too.”

This open communication about the family’s ministry kindled a passion in Joanna for spreading God’s love. Joanna smiled as she told me. “When I was in first grade, I was an extremely zealous child, and I would chat with a friend of mine from church on the bus going to school. We decided one day that we were going to make a Save the Whales club, because they needed saving. Then we thought, But wait… we need a Save the People club so we can bring them to the Lord!” Joanna laughed. “We were so excited about it, but it didn’t work so well. But, ironically, we also started a Batman club where we actually did lead a lot of kids to Christ, even though that wasn’t the aim at all.

“Having a missions focus growing up shaped who I am and definitely helped me and my siblings not to rebel,” Joanna said. “I always felt that when I was older, I’d be a missionary and I’d do big things for God when I had grown up. But growing up I realized that I already felt like I was a part of it, even though I was just a kid. I think a lot of it is because we went to the school that we did — we had that mission to reach diverse groups of people, not just people who were the same as us, and our school gave us opportunities to live out that mission ourselves. The call was so inclusive that it didn’t stop at where we lived or where we went to school. It just became our approach to life — helping people meet Jesus wherever they were.”

Joanna’s family challenged their children to make their faith their own by allowing them to do real work for God, even as children. Getting involved in something greater than yourself sometimes requires getting involved in something greater than your church. Jason’s problem was that church didn’t seem to change anything — it was just another club he was a part of. But for Joanna’s family and mine, Christianity had a much wider reach. We were in a position to see God really move in the lives of people around us. To us, going to church meant becoming equipped for the calling that God had for us outside the church walls, and that was much too important for us to give up.

Excerpted with permission from Why I Didn’t Rebel by Rebecca Lindenbach, copyright Rebecca Gregoire Lindenbach.

Come share your thoughts on raising kids with a Kingdom mindset on our blog. We would love to hear from you!