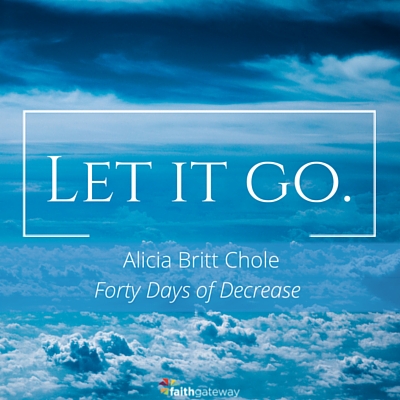 Editor’s Note: “What are you giving up for Lent?”.  Chocolate? Designer coffee? Social media? Carbs? Forty days later, some feel disappointed, some feel surprised by their success, but perhaps few feel spiritually renewed.  We ache to meaningfully honor Christ’s resurrection. Yet, in practice, this focal point in the liturgical calendar is often a celebration of public holiday more than it is of humanity’s hope. 40 Days of Decrease invites you to thin your life to thicken your communion with God.

Approaching a fresh endeavor can be both energizing and stressful. New is inspiring. New is enlightening.

And new is, oddly enough, a reminder of what is now old.

When fresh beginnings are stalked by the memories of stale endings, a sickly substance can steal our strength: regret.

Whereas godly sorrow leads us to repentance (2 Corinthians 7:10), regret leads us somewhere else. Regret empties anticipation, flattens dreams, and suffocates hope, because regret is a form of self-punishment. Hindsight helps us learn from the past, but regret beats us up with the past.

Are you carrying any regrets into your New Year?

Here, in between the afterglow of Christmas and the promise of Easter, I invite you to fast regret.

Do not feed it. Do not give it space. Let it go.

Why? Because God’s mercies are “new every morning.” (Lamentations 3:23) Why? Because anyone who is in Christ is “a new creation; the old has gone, the new has come!” (2 Corinthians 5:17) Why? Because Jesus is “making everything new!” (Revelation 21:5)

As Jesus-followers, newness is not the fluffy stuff of fairy tales. Our newness is the hard-won tangible fruit of an empty tomb.

Imagine with me the scene at Jesus’ tomb. At the chief priests’ and Pharisees’ request, Pilate had secured the tomb with a seal and soldiers (Matthew 27:62–66) because the rulers feared that the disciples might steal the body of Jesus.

As the posted guards stood watch to keep the dead from the living, Matthew recorded that,

There was a violent earthquake, for an angel of the Lord came down from heaven and, going to the tomb, rolled back the stone and sat on it…. The guards were so afraid of him that they shook and became like dead men. (Matthew 28:2–4)

This was the second earthquake in three days for the guards. Add an angel and they were done!

He is not here. He is risen. Just as He said. He is risen from the dead. He is going ahead of you. And you will see Him.

A few miles away from a manger in Bethlehem, and a few steps away from a cross in Golgotha, Jesus’ empty tomb secured the promise of new life.

All of which means that in Jesus “the old IS gone!” (2 Corinthians 5:17) You do not have to torment yourself with the past in order to learn from the past. In Christ, learn and let go!

This year, may God help us all fast regrets and cease dragging old, dead things with us into the new, abundant life that Jesus’ birth, death, and resurrection made possible.

Watch the Video for 40 Days of Decrease

Are there painful regrets you are still holding in your heart? Join the conversation on our blog! We’d love to hear from you about letting go of the past and letting God heal and restore! ~ Devotionals Daily