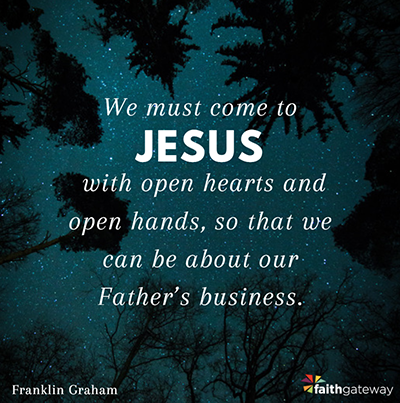 About My Father’s Business

If you send them forward on their journey in a manner worthy of God, you will do well. — 3 John 6

I do not come as an emissary of my government or my nation, but as a citizen of the kingdom of God… as Christ’s ambassador… to preach the Gospel. ~ Billy Graham

Resurrection Bay. You may think that this magnificent body of water flows somewhere in the land of the Bible, but it actually surges through fjords and tributaries in the United States — along the Kenai Peninsula of the great state of Alaska.

Alexandr Baranov, Russian-born explorer and merchant, was sailing the pristine waters when a vicious storm pounded the Gulf of Alaska. Baranov discovered a haven for retreat and hunkered down until the tempest gave way to a welcomed dawning. It was Easter Sunday, 1792. While he was overlooking the calming waters and vibrant sun, relief and hope settled, causing him to declare that place of safety Resurrection Bay. Ringed with majestic mountains and protected from the Gulf of Alaska, this Alaskan fjord has been a place of safety for boats.

When I think of Baranov casting his eyes over this bay and naming it for the greatest work Jesus Christ ever accomplished — His resurrection — I am reminded of the words of the psalmist:

Alaska has become a retreat for me. One summer when my children were still young, I took my family to the Land of the Midnight Sun. No wonder Alaska is known as the last frontier. I began to wonder if we would ever arrive. Once we did, I never wanted to leave. The very next year I announced to them that this was our new vacation destination. Several years ago I was there hunting black bear with some friends. We had chartered a small boat from Seward, which lies at the north end of Resurrection Bay. Late one evening as we chugged out of the bay and into the gulf, our little boat was battered by relentless waves. We tossed to and fro for hours, eventually finding refuge in a protected fjord in Prince William Sound. It gave me renewed respect for those who had experienced storms on the high seas.

I have a history with Alaska. In 1970, my father made arrangements for me to work in Alaska. He called his friend former governor Wally Hickel and asked if he could arrange a summer job for me. I never dreamed that years later I would own a little piece of Alaska wilderness, much less preach my first crusade in Juneau, the state capital, with the late Dr. John Wesley White.

In 1984, my father held a great crusade in Anchorage, Alaska’s largest city. Nine years later, I was invited to hold a crusade in the same city where many came to know Jesus Christ as their Savior.

Alaska is a wilderness of fascination for the people who live there.

When December arrives, part of Alaska doesn’t see the sun for several months. I have to say that I am glad to be back in the Appalachian Mountains, where winter sunrays shimmer through the trees. But in June, when the sun hangs over Alaska day and night, I can fish from early morning and into the late evening and still get back to my lakeside cabin to put dinner on the grill.

I have wonderful memories of fishing with my father on lakes and rivers. I guess that’s why it was thrilling to take my children fishing when we began vacationing in Alaska. My daughter Cissie even enjoyed the outdoor sport. And she should. She stunned me when, at ninety pounds, she hooked a seventy-two-pound king salmon. My boys and I have never lived it down.

Alaska is a fisherman’s dream. I have learned much about fishing from the late George Lye, a friend and coworker, during my visits to this magnificent state. Fishing requires performance, endurance, and tact. To be a good fisherman, it is necessary to study the tides and watch the weather carefully.

My father often equated fishing to soul winning. “To ‘catch’ men effectively,” he would say, “we have to study Christ.”

Jesus used the truth of His Word to draw men to Himself. The Gospel is a hook that snags a hungry lost soul.

When I climb into my little fishing boat and cast a line into the deep, gentle waves lap against the boat as I wait for the catch. The rocking of the waves is soothing to the soul and at times carries my thoughts to another fishing spot located seven hundred feet below sea level. Its history reveals the most amazing and memorable fish stories — not because of its stock, but because of the miracles drawn from its waters.

You can almost hear the water slapping against the wooden vessel — seven fishermen on the sea for a late-night catch. They were in familiar territory, doing a customary deed in a body of water they had traveled in and around most of their lives. But when dawn broke, their nets were empty and they were discouraged.

And when they did, they were not able to draw the net “because of the multitude of fish” (John 21:6).

Imagine the excitement in the disciple’s voice when John said to Peter,

There on the shore stood the resurrected Christ.

Impulsive Peter jumped overboard. He was too excited to try to walk. His limbs must have propelled through the Sea of Galilee like a two-hundred-horsepower Mercury outboard. He pulled his drenched body from the water and ran to Jesus.

As a frustrated fisherman myself, I can appreciate the responsible disciples who stayed behind to haul in the net. But I’d like to think I would have responded like Peter: Get to Jesus and forget the fish!

Peter found Jesus cooking fish and bread over the burning coals. There on the beach the disciples ate breakfast together and warmed themselves in the fellowship of their Master and Friend.

Before Jesus returned to Heaven, there were still some lessons these men had to learn about their Father’s business. Jesus had called them “children.” He had nourished their hunger. He had taught them how to fish for men and feed their souls.

“Do you love Me more than these?” Jesus asked Peter. Peter replied, “Yes, Lord; You know that I love You.”

Jesus asked a grieving Peter the question for the third time. Peter must have thought about his denial of Christ three times before the crucifixion. He wanted desperately for the Lord to know of his deep love for Him.

But Jesus wanted something greater than just a commitment of human love. It was Peter who would lead Jesus’ disciples to be about their Father’s business. Jesus wanted Peter to love Him more than fishing. He wanted Peter to love Him at all cost of pleasure and desire. He wanted Peter’s complete devotion that would be necessary to feed and tend His sheep. Peter’s mission was not only to become a fisher of men but also to feed men’s souls with the Word of God and then send them out to fish for others.

My father exhibited what he often preached to those who proclaimed the Gospel. “He who is called to, and set apart for, the work of an evangelist,” my father would say, “is to devote his time and effort single-mindedly to this God-given task. He is not to be distracted by anything likely to deflect him from this.”

Jesus continued deepening Peter’s understanding to the point of telling him that he, too, would lose his life for Christ’s sake through martyrdom. When Peter finally realized the genuine love required to follow the Savior, Peter’s heart dropped anchor, stabilizing his resolve to follow Jesus no matter what, even to a gruesome death.

Jesus understood His mission on earth, and He wanted His disciples to understand what their love for Him required. “To be a disciple of Jesus means to learn from Him and to follow Him in obedience. The cost may be high,” my father often said.

This is what Jesus was telling His disciples. History proves, and the Scriptures document, that the disciples understood to the point of losing their lives for Him.

They Sought Him Anxiously

Even as a boy, Jesus understood His mission on earth. When only twelve, Jesus accompanied His parents to Jerusalem for the feast of the Passover. On the return trip to Nazareth, after a day’s journey, Mary and Joseph realized that Jesus was not among the great company of travelers. They made haste and returned to the city and found Jesus in the temple,

sitting in the midst of the teachers, both listening to them and asking them questions. And all who heard Him were astonished at His understanding and answers. — Luke 2:46-47

Mary said to Him, “Son, why have You done this to us? Look, Your father and I have sought You anxiously.” — Luke 2:48

Surely Mary realized that a time would come when Jesus would face danger. But her mother’s heart could not help but hold on to Him until that awful day.

Our humanity wants to hold tight to what belongs to us. We do not always comprehend what Christ expects of us. But as Peter learned, we must lay aside all things that our wills grip.

We must come to Jesus with open hearts and open hands so that we can be about our Father’s business, compelling lost souls to seek Jesus anxiously.

Hear from Franklin Graham about the book

Franklin Graham enjoyed the enormous privilege of having a father whose single-minded purpose in life was to share the Good News. What an example! We also have the record of the disciples of Jesus who grew from being a band of unlikely, unschooled rascals to men wholly devoted to spreading the Gospel of Jesus Christ. That’s who we can be, too! Come share your thoughts with us on our blog. We want to hear from you! ~ Devotionals Daily