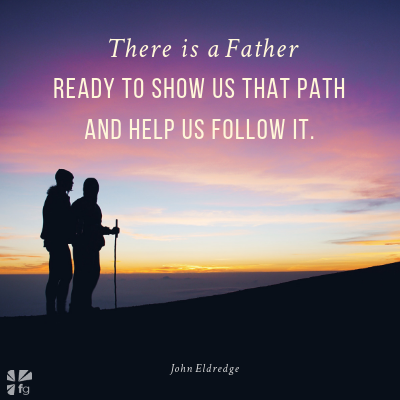 One of the most haunting experiences I have ever had as a man took place on an early summer day in Alaska. My family and I were sea kayaking with humpback whales in the Icy Strait, and we stopped on the shore of Chichagof Island for lunch. Our guide asked us if we wanted to go for a hike into the interior of the island, to a clearing where grizzlies were known to feed. We were all over that invitation.

After a twenty minute walk through a spruce forest, we came into what appeared to be a broad, open meadow about four hundred yards across. Being midday, and hot, there were no bears to be seen. “They’re sleeping now, through the afternoon. They’ll be back tonight,” he said. “C’mere — I want to show you something.”

The meadow was actually more of a bog, a low-lying jungle of brushy groundcover about two feet high, barely supported underneath by another foot of soaked moss and peat. A very difficult place to walk. Our guide led us to a trail of what seemed to be massive footprints, with a stride of about two feet between them, pressed down into the bog and making a path through it.

“It’s a marked trail,” he said. A path created by the footprints of the bears. “This one is probably centuries old. For as long as the bears have been on this island, they’ve taken this path. The cubs follow their elders, putting their feet exactly where the older bears walk. That’s how they learn to cross this place.”

I began to walk in the marked trail, stepping into the firm, deep-worn places where bears had walked for centuries. I’m not sure how to describe the experience, but for some reason the word holy comes to mind. An ancient and fearful path through a wild and untamed place. I was following a proven way, laid down by those much stronger and far more prepared for this place than me. And though I knew I did not belong there, I was haunted by it, could have followed that path for a long, long time. It awakened some deep, ancient yearning in me.

Fathered by God is about what it looks like to become a man, and — far more to our need — how to become a man. There is no more hazardous undertaking, this business of “becoming a man,” full of dangers, counterfeits, and disasters. It is the Great Trial of every man’s life, played out over time, and every male young and old finds himself in this journey. Though there are few who find their way through. Our perilous journey has been made all the more difficult because we live in a time with very little direction. A time with very few fathers to show us the way.

As men, we desperately need something like that marked trail on Chichagof Island. Not more rules, not another list of principles, not formulas. A sure path, marked by men for centuries before us.

I believe we can find it.

I love maps. Most men do. The pleasure of a map is that it gives you the lay of the land, and yet you still have to make choices about how you will cover the terrain before you. A map is a guide, not a formula. It offers freedom.

It does not tell you how fast to walk, though when you see the contour lines growing very close together, you know you are approaching steep terrain and will want to mend your stride. It does not tell you why the mountain is there, or how old the forest is. It tells you how to get where you are going.

I’ve often wondered at the long lists found many places in the Bible that recount a roster of men as “the son of so-and-so, who was the son of so-and-so.” You’ll find many of these rosters in the Scriptures, and elsewhere in ancient literature. Perhaps these accounts reveal something we hadn’t noticed before — a fatherview of the world held by those who wrote them, shared by those who would read them. Perhaps they saw in the father-son legacy the most significant of all legacies, that to know a man’s father was in great part to know the man. And then, if you step back further to have a look, you’ll see that the God of the Bible is portrayed as a great Father — not primarily as mother, not merely as Creator — but as Father.

You see, the world in which we live has lost something vital, something core to understanding life and a man’s place in it. For the time in which we live is, as the social prophet Alexander Mitcherlie had it, a time without a father. I mean this in two ways. First, that most men and most boys have no real father able to guide them through the jungles of the masculine journey, and they are — most of us are — unfinished and unfathered men. Or boys. Or boys in men’s bodies. But there is a deeper meaning to the phrase “a time without a father.” Our way of looking at the world has changed. We no longer live, either as a society or even as the church, with a fatherview of the world, the view centered in the presence of a loving and strong father deeply engaged in our lives, to whom we can turn at any time for the guidance, comfort, and provision we need.

And that is actually an occasion for hope. Because the life you’ve known as a man is not all there is. There is another way. A path laid down for centuries by men who have gone before us. A marked trail. And there is a Father ready to show us that path and help us follow it.

Come share your thoughts on the “proven way, laid down by those much stronger and far more prepared for this place” on our blog! We want to hear from you. ~ Devotionals Daily