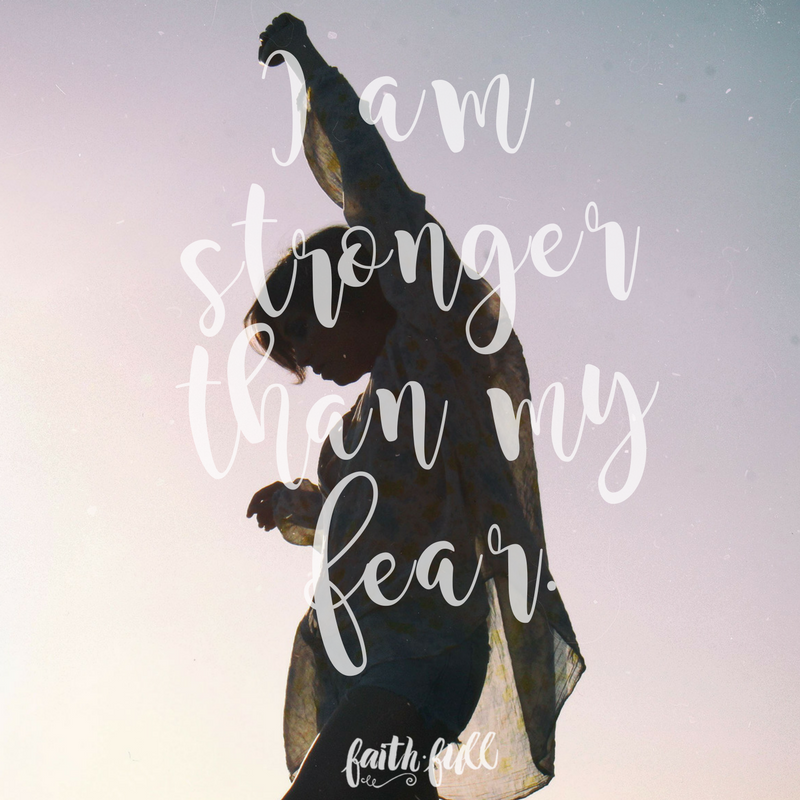 I should have taken a class in college on how to face my fears, but I never saw it offered on any course list. If you wish you’d done this as well, as you have some fears of your own to face, try to sit quietly in your room and you’ll find yourself in a graduate-level class!

Just thinking about facing our fears can make us feel afraid.

Never forget: fear is a bully — an insecure, mean kid that feels better when you feel small.

One of the ways I stand up to the bully is to write my fears down on paper. Written down, fears often look silly. But regardless of whether or not they are legit, whenever I give in to fear, it grows. When I stand up to it for being the bully it is, fear diminishes and my strength increases.

Here are a few of the (yes, ridiculous) fears that make getting still difficult for me.

I fear I’ll stink at this. In fairness, this fear has relatively little to do with the act of getting still. It’s just another place this very personal fear shows up. I carry it with me like a watermelon to a picnic, so it would make sense how often it shows up when I’m heading to my room. I don’t think you’re doing this “still thing” very well. Remember that silent retreat, Nicole? This isn’t your strength. And what if you’re doing this wrong? I bet Richard Rohr doesn’t have this fear. Why don’t you focus on your gifts and leave this stillness to those who have been doing it longer and can do it better? When there is nothing to keep me from going down the rabbit hole of my own inadequacy, I have two choices:

I am empowered to stand my ground when I recognize that my fear is trying to protect something. If I go straight toward the fear with questions it must answer, I turn the tables and demonstrate that I am in charge. Why are you so afraid of not being good at this? What would that mean? What if the whole world decided you were no good at this? What if Richard Rohr publicly said, “Nicole Johnson is no good at this whole stillness thing”? What would happen?

Now I’ve gotten to the heart of my fear. Having identified this fear by name, it becomes much easier to tame. I take a minute to feel it, really think about it, and then walk right past it. Because I can say to that fear, “It doesn’t matter to me if the whole world, including the fabulous RR, thinks I stink at this!” One of the reasons to move toward stillness is to uproot our fears of not being good enough — so it is working! Besides, how can I stink at something that is working so well? And who cares if I do? So there, fear!

I fear I’ll get bored. Despite how many significant and meaningful times I’ve spent being still, something in me fears it each time anew. My mind whispers, You are going to get bored. I’m not sure where this fear of boredom comes from or if there was a time in my life when it really began; it seems to me that it is just part of the human condition, mine anyway.

My children fear boredom like some incurable disease they might catch. They panic and think I should be saving them from it like I would be if they were drowning in front of my eyes. It’s hard to fault them too much as I know plenty of adults who also fear boredom. Some of my friends tell me they would prefer an insane life of busyness to being bored. Racing from thing to thing, living in constant stimulation, they offer, “Well, at least I’m not bored.” I can’t count the number of times I’ve been waiting in line behind a full-on grown-up who has been made to wait, and you would think having to stand there for a few minutes was going to cause a rupture in their aorta!

I am learning to face this fear by asking myself, So what if you’re bored? You haven’t been bored before, but if you get bored this time, what is the big fat deal? What is the worst thing that can happen? I have to remind my brain that fear is not in control. There is a new sheriff in town and boredom is not a bad guy!

I’ve actually found great freedom in boredom — not that I experience it much. But when I have, it was surprisingly pleasant, Wow this is cool; I’m bored! The fear of boredom is not rare or cool, but boredom itself is quite nice. I’ve come to see it as an indication that I’m getting still. And not surprising is how often creative thoughts or insights with divine fingerprints come straight out of the lovely boredom I feared so much.

I fear I’ll feel worse than I already do. As an adult, I’ve never gone out of my way to spend time with myself until recently. (This doesn’t mean I wasn’t ever by myself; it means I never sought time alone with myself, on purpose, unlike accidentally getting stuck in an elevator, but that’s a story for another time.) Until [God led me to a] moment of “being found,” shame kept me afraid (subconsciously) that if I ever went back to that dark hallway, no one would ever come to find me.

This was a piece of the offering hidden in the crisis. The rejection by my friend sent me straight to that hallway, and I played my part just as I always had. The sad, alone, confused little girl who felt very ashamed by what she had done (whatever it had been). Dr. Curt Thompson writes in Anatomy of the Soul that when we are in “the grip of shame, we have a keen sense of painful isolation. We feel separated, not only from others, but disconnected within ourselves.”1 Shame will keep us in that state of confusion about our own feelings and separated from others. We have to choose the very connection, especially within ourselves, that feels terrifying in the moment. This is the way out of shame. It is the way to freedom.

Healing found my little girl soul, but healing continues in the corridors of my mind every time I face this fear, which is almost every time I get still. I fear when I reflect over things I’ve neglected or when I acknowledge things I’ve done wrong, that shame is going to eat me alive. I’m not going to feel the “appropriate guilt” (I’ve done something wrong and can make amends); instead I am going to be consumed by shame, which feels like I’m just bad and I’ll never be able to make things right.

To face this fear and continue to stillness, I simply have to point past it to that room that lies ahead. My own place of strength and beauty is the proof that I’m no longer that little girl. I have a room of my own waiting for me just up ahead. The light is on and the deep love of God is calling me. That is all the invitation I need to bid adieu to that “you’re going to feel bad” fear and ask it to kindly step aside, for I have somewhere to be right now, and goodness is waiting for me.

I don’t intend to communicate that I no longer have to face these fears. Nor do I intend to portray them as easy to conquer. They are menacing fears, not unlike big hulking guards, that show up most often at the passageway to stillness, trying to block my access. They want to make me afraid to go into my room. But knowing they are the self-appointed bodyguards of my mind trying to protect itself (from things it doesn’t need to fear) makes it easier to fight them. Since I’ve named them and stood up to them, they seem to respect me. Sometimes they even let me pass without a fight, but they’ve also been known to be semi-polite and then try to trip me on the way in. Some days a new fear will show up, but being a little more familiar with the tricks and schemes, I find I’m more creative with ways to side- step them and continue on my way to still and quiet. Because despite the struggle, once I arrive, the value of being still is worth far more than the challenge of all difficulties put together.

Fear has been the bane of my existence hunting and stalking me through many seasons. Psalm 46:10 says Be still and know that I am God. Psalm 37:7 says Be still before the Lord and wait patiently for Him. Exodus 14:14 says The Lord Himself will fight for you; you need only to be still. And, yet fear is such a bully. Today, let’s remind fear who Jesus is and what His Word says and let’s Fear Not! Come and share your thoughts with us on our fear-stomping Jesus. We would love to hear from you! ~ Laurie McClure, Faith.Full