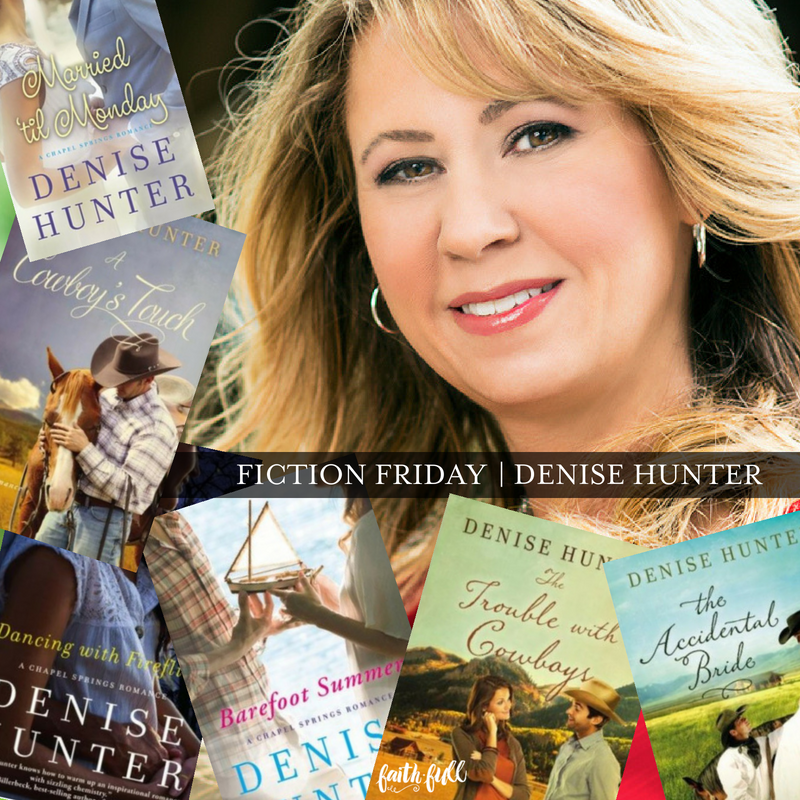 Editor’s note: It’s Fiction Friday! Today we are sharing with you two book series by Denise Hunter that are perfect for summer days by the pool, the beach, or the lake.

In case you’ve not fallen in love in a Denise Hunter novel yet, here’s a little bit from her bio:

Denise Hunter is the internationally published bestselling author of more than 30 books, including “The Convenient Groom” and “A December Bride” which have been made into Hallmark movies. She has appeared on the The 700 club and won awards such as The Holt Medallion Award, The Carol Award, The Reader’s Choice Award, The Foreword Book of the Year Award, and is a RITA finalist.

Denise writes heartwarming, small-town love stories. Her readers enjoy the experience of falling in love vicariously through her characters and can expect a happily-ever-after sigh as they close the pages of her books.

Who loves great fiction for $5? We do!

Barefoot Summer — Madison’s heart has been closed for years. But one summer can change everything.

In the years since her twin brother’s drowning, Madison McKinley has struggled to put it behind her. Despite the support of her close-knit family and her gratifying job as a veterinarian in their riverside town, the loss still haunts her.

To find closure, Madison sets out to fulfill her brother’s dream of winning the town’s annual regatta. But first she has to learn to sail, and fast.

Beckett O’Reilly knows Madison is out of his league, but someone neglected to tell his heart. Now she needs his help — and he’ll give it, because he owes her far more than she’ll ever know.

Madison will do anything — even work with the infamous Beckett O’Reilly — to reach her goal. And as much as she’d like to deny it, the chemistry between them is electrifying. As summer wanes, her feelings for him grow and a fledgling faith takes root in her heart.

But Beckett harbors a secret that will test the limits of their new love. Can their romance survive summer’s challenges? And will achieving her brother’s dream give Madison the peace she desperately seeks?

Dancing with Fireflies — Jade returns home to Chapel Springs after years of protecting her fragile heart. Then along comes Daniel, making her long to dance again.

Growing up in the Midwestern river town of Chapel Springs, Indiana, Jade McKinley felt like a weed in a rose garden. When she left, she thought she’d never look back. Now, pregnant, alone, and broke, she has no other choice but to return.

The mayor of Chapel Springs, Daniel Dawson, has been an honorary member of the McKinley family for years. While his own home life was almost nonexistent, Daniel fit right in with the boisterous McKinley family. He’s loved Jade for years, but she always thought of him as a big brother. Now that she’s back, his feelings are stronger than ever.

As Jade attempts to settle in, nothing feels right. God seems far away, she’s hiding secrets from her family, and she’s strangely attracted to the man who’s always called her “squirt.” Returning home may prove more difficult—and more wonderful—than she ever imagined.

The Wishing Season — In this competition, it’s not just the house on the line, it’s their hearts.

She has the touch when it comes to food, but PJ McKinley’s dream of opening her own restaurant is one building short of reality. So when a Chapel Springs resident offers her beloved ancestral home as prize to the applicant with the best plan for the house, PJ believes she was meant to win.

Contractor Cole Evans is confident, professional, and swoon-worthy—but this former foster kid knows his life could have turned out very differently. When Cole discovers the contest, he believes his home for foster kids in transition has found its saving grace. All he has to do is convince the owner that a not-for-profit enterprise will be good for the community.

When the eccentric philanthropist weighs the proposals, she proposes an outlandish tie-breaker: PJ and Cole will share the house for a year to see which idea works best. Now, with Cole and the foster kids upstairs and PJ and the restaurant below, day-to-day life has turned into an out-and-out rivalry—with some seriously flirtatious hallway encounters on the side. But could their magnetic attraction cost them everything they’ve ever wanted?

Married ‘Til Monday — With a big anniversary party in the works for his ex-wife’s parents, Ryan has just one weekend to play Abby’s husband . . . and win back the woman of his dreams.

Ryan McKinley has tried to move on from his ex-wife, Abby. He’s sulked, he’s gotten angry, and ultimately he bought her dream house. Big mistake. Living alone in the massive two-story has only made him miss her more. When her parents call him out of the blue about their anniversary party in Summer Harbor, Maine, Ryan believes God has dropped a golden opportunity straight in his lap.

Then Ryan shows up on her doorstep, looking as handsome as ever. When he insists he’s going to Summer Harbor, with or without her, Abby knows she can’t say no. Her parents still think they’re married and now Ryan knows it too. It’s just a one-week road trip with the man who broke her heart. What could possibly go wrong?

A Cowboy’s Touch — Abigail is just in Moose Creek, Montana for the summer to temporarily care for her great aunt. But a tender-hearted cowboy beckons her to stay.

Abigail Jones intends to spend just one summer in middle-of-nowhere Montana with her Aunt Lucy. Time away from her job is just what Abigail needs to reassess her life. The slow pace has her breathing deeply for the first time in years. And the majestic scenery encourages her to get reacquainted with herself . . . and God.

What she didn’t count on was the handsome widowed cowboy who owns the ranch where her aunt lives. When the rancher loses his daughter’s nanny, Abigail decides to lend a hand for the summer.

Wade Ryan can’t help being attracted to Abigail. But he’s given up everything to protect his daughter, and he’s not about to risk it all on a pretty face.

Under Abigail’s care, Wade’s home and daughter thrive. And with Wade’s touch, Abigail’s heart feels at home at last. But Abigail knows this elusive rancher is hiding something. Will her own secrets separate her from the cowboy who finally captured her heart?

Shay Brandenberger is raising her daughter in Moose Creek, Montana, on her childhood ranch, nestled against the Yellowstone River. Despite the hard work, she can’t seem to keep her head above water—and now the bank is threatening to foreclose. She prays for a miracle, but the answer she receives is anything but expected.

Having agreed to play the bride in the Founders’ Day wedding reenactment, Shay is mortified to be greeted at the end of the aisle by none other than Travis McCoy, her high-school sweetheart—the man who left her high and dry for fame and fortune on the Texas rodeo circuit.

Then the unthinkable happens. Thanks to a well-meaning busybody and an absentminded preacher, the make-believe vows result in a legal marriage. But before Shay can say annulment, Travis comes up with a crazy proposal. If she refuses his offer, she may lose her home. If she accepts, she may lose her heart.

Shay isn’t sure if the recent events are God’s will or just a preacher’s blunder. Will trusting her heart to the man who once shattered it be the worst mistake of her life? Or could their marriage be the best accident that ever happened?

The Trouble with Cowboys — Only one pair of boots – and the cowboy wearing them – can get Annie out of the mess she’s in.

Annie Wilkerson is Moose Creek’s premiere horse trainer and equine columnist for Montana Living. Money is tight as she tries to put her kid-sister through college and provide for her young nephew. When Annie’s column is cancelled, she’s given first shot at a new lovelorn column — and she can’t afford to turn it down. Only problem is… Annie’s never been in love.

Always resourceful, she reluctantly strikes a deal with the town’s smooth-talking ladies’ man Dylan Taylor: She’ll work with his ailing horse, Braveheart, if he’ll help her answer the reader letters.

Working closely with Dylan is harder than Annie imagined, and she quickly realizes she may have misjudged him. But her unwavering conviction that cowboys are nothing but trouble has kept her heart safe for years. And she can’t risk getting hurt now.

The more Annie tries to control things, the more they fall apart. Her feelings are spinning out of control, and her sister’s antics are making life increasingly more difficult. Annie knows she needs to turn the reins over to God, but surrender has never come easily.

When Dylan reveals his feelings for her, Annie doesn’t know what to trust—her head or her heart. The trouble with this cowboy is that he might just be exactly what she needs.

What’s on your bedside table or book bag for this summer? Come share with us! We’d love to hear! ~ Laurie McClure, Faith.Full