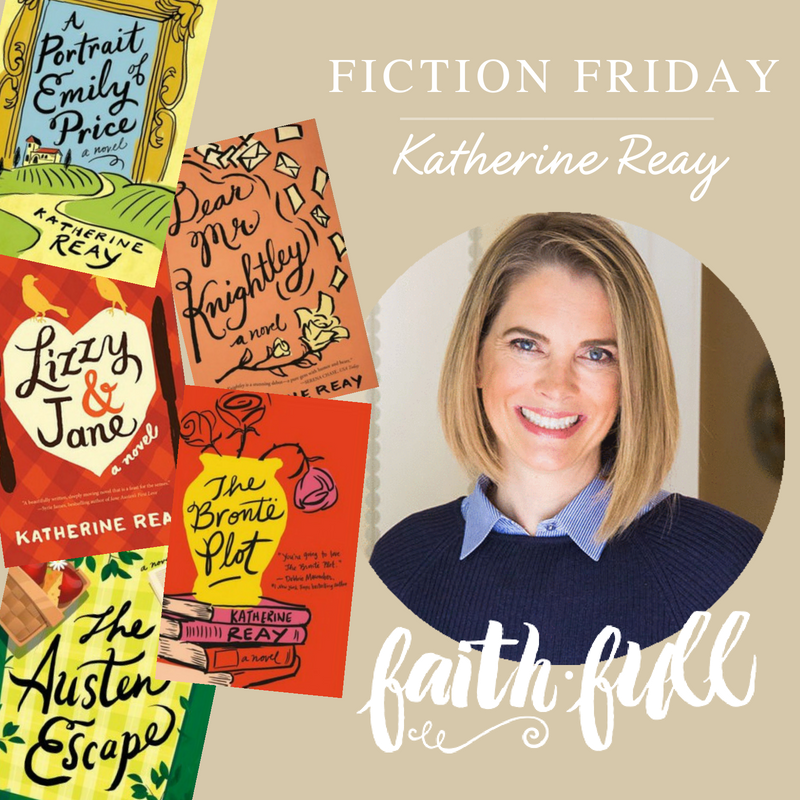 Editor’s note: Hooray! It’s Fiction Friday! Today we are featuring a bestselling and award-winning author — Katherine Reay. If you love classic Brit Lit like we do, you’ll love her!

“Katherine Reay’s Dear Mr. Knightley kept me up until 2:00 a.m.; I simply couldn’t put it down.” —Eloisa James, New York Times best-selling author of Once Upon a Tower

Samantha Moore has always hidden behind the words of others — namely, her favorite characters in literature. Now, she will learn to write her own story — by giving that story to a complete stranger.

Sam is, to say the least, bookish. An English major of the highest order, her diet has always been Austen, Dickens, and Shakespeare. The problem is, both her prose and conversation tend to be more Elizabeth Bennet than Samantha Moore.

But life for the twenty-three-year-old orphan is about to get stranger than fiction. An anonymous, Dickensian benefactor (calling himself Mr. Knightley) offers to put Sam through Northwestern University’s prestigious Medill School of Journalism. There is only one catch: Sam must write frequent letters to the mysterious donor, detailing her progress.

As Sam’s dark memory mingles with that of eligible novelist Alex Powell, her letters to Mr. Knightley become increasingly confessional. While Alex draws Sam into a world of warmth and literature that feels like it’s straight out of a book, old secrets are drawn to light. And as Sam learns to love and trust Alex and herself, she learns once again how quickly trust can be broken.

Reminding us all that our own true character is not meant to be hidden, Reay’s debut novel follows one young woman’s journey as she sheds her protective persona and embraces the person she was meant to become.

Plus Bonus Material: Q & A with Katherine Reay and Sam’s Reading List

Lizzy and Jane couldn’t be further from Jane Austen’s famous sisters for whom they are named.

Elizabeth left her family’s home in Seattle fifteen years ago to pursue her lifelong dream — chefing her own restaurant in New York City. Jane stayed behind to raise a family. Estranged since their mother’s death many years ago, the circumstances of their lives are about to bring them together once again.

Known for her absolute command of her culinary domain, Elizabeth’s gifts in the kitchen have begun to elude her. And patrons and reviewers are noticing. In need of some rest and an opportunity to recover her passion for cooking, Elizabeth jumps at the excuse to rush to her sister’s bedside when Jane is diagnosed with cancer. After all, Elizabeth did the same for their mother. Perhaps this time, it will make a difference.

As Elizabeth pours her renewed energy into her sister’s care and into her burgeoning interest in Nick, Jane’s handsome coworker, her life begins to evolve from the singular pursuit of her own dream into the beautiful world of family, food, literature, and love that was shattered when she and Jane lost their mother. Will she stay and become Lizzy to her sister’s Jane — and Elizabeth to Nick’s Mr. Darcy — or will she return to the life she has worked so hard to create?

Falling into the past will change their futures forever.

Mary Davies finds safety in her ordered and productive life. Working as an engineer, she genuinely enjoys her job and her colleagues — particularly a certain adorable and intelligent consultant. But something is missing. When Mary’s estranged childhood friend, Isabel Dwyer offers her a two-week stay in a gorgeous manor house in England, she reluctantly agrees in hopes that the holiday will shake up her quiet life in just the right ways.

But Mary gets more than she bargained for when Isabel loses her memory and fully believes she lives in Jane Austen’s Bath. While Isabel rests and delights in the leisure of a Regency lady, attended by other costume-clad guests, Mary uncovers startling truths about their shared past, who Isabel was, who she seems to be, and the man who now stands between them.

Outings are undertaken, misunderstandings arise, and dancing ensues as this company of clever, well-informed people, who have a great deal of conversation, work out their lives and hearts.

When Lucy’s secret is unearthed, her world begins to crumble. But it may be the best thing that has ever happened to her.

Lucy Alling makes a living selling rare books, often taking suspicious liberties to reach her goals. When her unorthodox methods are discovered, Lucy’s secret ruins her relationship with her boss and her boyfriend, James — leaving Lucy in a heap of hurt and trouble. Something has to change; she has to change.

In a sudden turn of events, James’s wealthy grandmother, Helen, hires Lucy as a consultant for a London literary and antiques excursion. Lucy reluctantly agrees and soon discovers Helen holds secrets of her own. In fact, Helen understands Lucy’s predicament better than anyone else.

As the two travel across England, Lucy benefits from Helen’s wisdom as Helen confronts ghosts from her own past. Everything comes to a head at Haworth, home of the Brontë sisters, where Lucy is reminded of the sisters’ beloved heroines who, with tenacity and resolution, endured — even in the midst of impossible circumstances.

Now Lucy must face her past in order to move forward. And while it may hold mistakes and regrets, she will prevail — if only she can step into the life that’s been waiting for her all along.

A Portrait of Emily Price

Art restorer Emily Price has never encountered anything she can’t fix—until she meets Ben, an Italian chef, who seems just right. But when Emily follows Ben home to Italy, she learns that his family is another matter . . .

Emily Price — fix-it girl extraordinaire and would-be artist — dreams of having a gallery show of her own. There is no time for distractions, especially not the ultimate distraction of falling in love.

But Chef Benito Vassallo’s relentless pursuit proves hard to resist. Visiting from Italy, Ben works to breathe new life into his aunt and uncle’s faded restaurant, Piccollo. Soon after their first meeting, he works to win Emily as well — inviting her into his world and into his heart.

Emily astonishes everyone when she accepts Ben’s proposal and follows him home. But instead of allowing the land, culture, and people of Monterello to transform her, Emily interferes with everyone and everything around her, alienating Ben’s tightly knit family. Only Ben’s father, Lucio, gives Emily the understanding she needs to lay down her guard. Soon, Emily’s life and art begin to blossom, and Italy’s beauty and rhythm take hold of her spirit.

Yet when she unearths long-buried family secrets, Emily wonders if she really fits into Ben’s world. Will the joys of Italy become just a memory, or will Emily share in the freedom and grace that her life with Ben has shown her are possible?

So, what are you reading? I just picked up Lizzy & Jane because everyone I asked raved about it and I can’t wait for the weekend to dig into it!  ~ Laurie McClure, Faith.Full