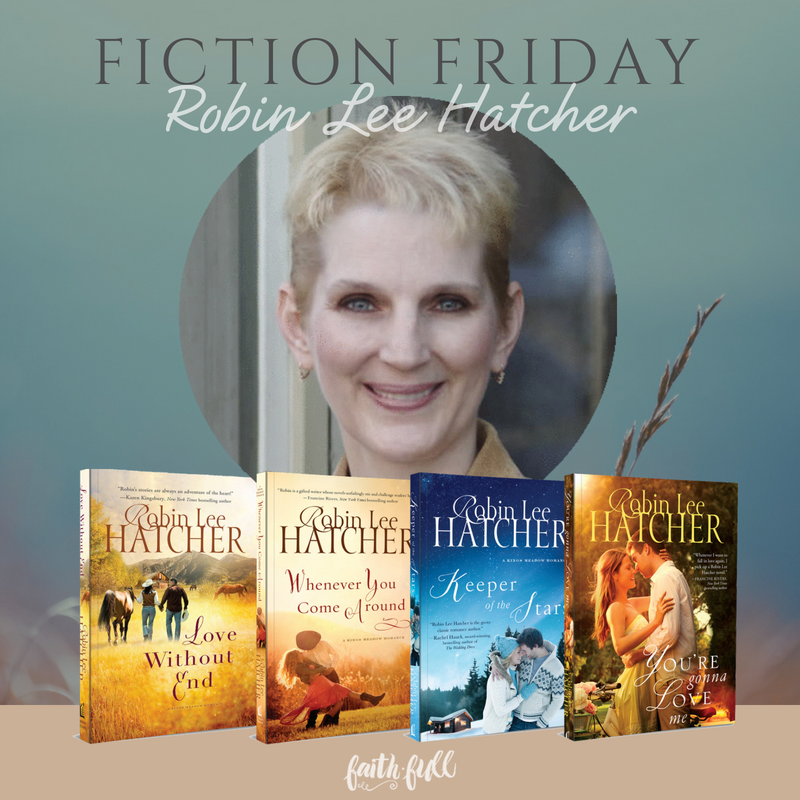 Editor’s note: It’s Fiction Friday! Today we’re sharing with you some great titles by the great Robin Lee Hatcher. If Robin is new to you, here’s what some of our favorite Christian fiction authors have to say about her:

Whenever I want to fall in love again, I pick up a Robin Lee Hatcher novel.

Robin’s stories are always an adventure of the heart! She is one of the premier storytellers of our day.
— Karen Kingsbury, NYT bestselling author

You’re Gonna Love Me. Who knew fate could twist a tragedy into a second chance at love?

Samantha Winters lives her life the way a good accountant should — measured, deliberate, and safe. After watching her father die in a tragic skiing accident, she decided never to allow risk into her life again. But she didn’t count on falling for Nick Chastain, who embodies everything she doesn’t want in her safely constructed world.

Against Samantha’s warnings, Nick plans a dangerous kayaking trip over spring break. Furious that he’s so careless with his life, she ends their fledgling relationship with harsh words.

With the charming backdrop of small-town friends, beloved cousins, and a whole church congregation rooting for them, can they set aside the disastrous ending of their first try at love? Has Nick changed enough to meet Samantha in the middle—and can she realize that a risk in love might be worth taking? Read more…

Love Without End. For two single parents with bruised hearts, it’ll take more than a little courage to get back on the horse when it comes to love.

Kimberly Welch lost her husband to a heart attack in the blink of an eye. But she’s losing her daughter slowly, in the day-to-day tension. In three difficult years, Kimberly has gone from Seattle socialite to Kings Meadow charity case, and her daughter is not responding well to the changes. She’s becoming a sullen, cantankerous teen.

Chet Leonard lost his teenage son in a car accident. Then his wife abandoned him and their two remaining boys. He tries to keep his mind on the family ranch, but if the last two years have taught him anything, it’s that sometimes you just have to let the memories hurt. Let the memories hurt, and leave well enough alone.

But when Chet volunteers to help tame Kimberly’s daughter’s horse, everyone gets more than they bargained for… especially when eighty-four-year-old Anna McKenna shows up.

Nana Anna has reappeared in Kings Meadow after decades away, bringing with her the magnetism and transformative joy that come from a life well lived… just the kind of magic that a couple of unlucky-in-love single parents need to conjure up a little courage and raise a new family from the ashes of tragedy.

“Hatcher crafts a lovely installment of the Kings Meadow Romance and readers will want more of the Idaho ranchers. It takes us into the healing power of horses and God’s ability to create community where it is most needed.” —Romantic Times, 4-1/2 star review. Learn more…

Whenever You Come Around. Will writing a romance help this author find a real-life hero?

Charity Anderson turned her back on Kings Meadow years ago, with good reason, and has avoided visits to her hometown whenever possible. But with her house in Boise damaged by floodwaters and a book deadline bearing down, staying in her parents’ empty home seems her only option. However, being back in Kings Meadow dredges up a painful secret, and old fears threaten to overwhelm her.

Charity’s former high school classmate Buck Malone never left town, instead sacrificing his dreams to take care of his family. Now he enjoys an uncomplicated life as a wilderness guide and confirmed bachelor. The last thing on his mind is settling down.

When Charity’s dog causes an accident that leaves Buck with a broken ankle and wrist at the start of prime tourist season, Charity has little choice but to render aid while he recuperates.  Soon Buck becomes the inspiration for Charity’s hero, both on the page and off. Can he also help her face and overcome her fears so they might find their own happily ever after? Read more…

Keeper of the Stars. Forgiveness is the only cure for heartbreak. But can Penny forgive the man she holds responsible for her brother’s death?

When her mother died from pneumonia, Penny Cartwright was heartbroken. But now, after burying her younger brother just 12 years later, she is devastated. Anger, guilt, and sorrow cloud Penny’s mind, and the last thing she wants is to be reminded of her pain — but that’s exactly what happens when a stranger comes to town.

Trevor Reynolds has been chasing fame for more than a dozen years, but his musical career can’t get off the ground. While on the road, an accident kills his young drummer, Brad Cartwright. Trevor wasn’t behind the wheel, but he still blames himself… and so does Brad’s sister, Penny. Now Trevor finds himself in Kings Meadow, determined to follow through on his final promise to his friend.

Still feeling the pain of Brad’s death, Penny and Trevor must learn that forgiveness is the only thing that can heal their hearts. And if they do forgive, something beautiful may rise from the ashes of heartbreak. Learn more…

What are you reading right now? We’d love to hear from you! ~ Laurie McClure, Faith.Full