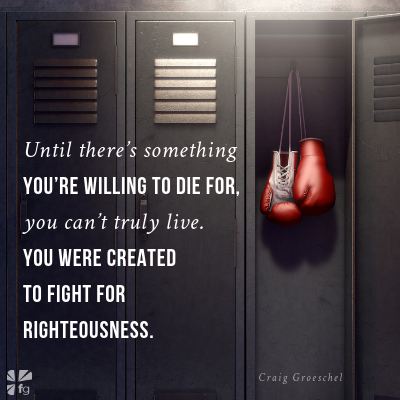 The virtue of strength is determined by how it’s used. [tweet this]

If it’s used to love and to protect, it’s good. Unfortunately, it can also be used to inflict harm, and that’s not consistent with what we see of God’s character in the Bible. He calls us to fight for what’s right. And a warrior is only as worthy as his cause.

A man without a cause from God is often just an angry man who doesn’t know where to direct his pent-up energy and aggression. A warrior with a cause from God directs that warlike energy for a cause greater than himself.

Gentlemen, God created you with the heart of a warrior. Until there’s something you’re willing to die for, you can’t truly live. You were created to fight for righteousness.

Until you tap into that divine cause, you’ll be bored, destructive, and frustrated. Find something more. I thank God I get to live my divine cause. I honestly believe I’m on the front lines of the most important war: the one between heaven and hell. The kingdom of God versus the kingdom of darkness. My sword is drawn, and I’m on the front lines. I’m willing to die for the cause to lead people to become fully devoted followers of Christ. That’s not what I do; that’s who I am. It starts with my family, and it bleeds into everything I do anywhere I am.

Recently, I had this very powerful moment with a group of college students who visited the church where I preach. The young gals usually attended another one of our church locations in another community where our messages are broadcast via video, so they had listened to me preach for a couple of years. After the message that day, several girls from this group came up to talk to me. They were very gracious, basically telling me, “Pastor Craig, we’re so thankful for you! Our dads didn’t set an example for us as godly men. We appreciate what you do. You’re such a strong man of God. We pray all the time that we’ll find strong men of God like you that we can marry.”

I was flattered, and also kind of embarrassed. I laughed and told them, “Wow. Thank you so much. But I feel like you need to understand something:

I’m not strong at all. I’m actually one of the weakest men you’ve ever met.”

They looked confused, so I tried to explain. “What you really want is not some guy who looks strong on the outside. You want a man who can stand strong only because he spends time on his knees every day before God.”

(Ladies, don’t miss this. The man you want isn’t the guy who wins tough-guy fights but the man who knows his weaknesses and fights in God’s strength. He won’t be perfect. But God will be perfecting him.)

Every guy wants to be strong.

Maybe you’d like to make the cover of Men’s Health or something, a cocky little half-smile on your face, flexing your massive biceps as you slightly lift your tight V-neck shirt to reveal your ripped abs underneath.

That’s what many men think they want. But guys who invest their lives only in physical strength don’t advance God’s kingdom in the world — at least not that way.

I want to redefine the way you think about what it means to be a warrior. It’s not about cockiness and attitude; it’s not about six-pack abs and picking fights; it’s not about succeeding in life and winning everyone’s admiration or envy. Being a true warrior is about knowing the source of true strength. It’s about knowing your weaknesses and turning to God to empower you to be the man He made you to be. You don’t have to become Jason Bourne or James Bond (Sean Connery or Daniel Craig, not those other wimps) to be a warrior.

So if you’re a peace-loving dude who feels like he’s not really struggling with any major problems, then keep reading. This book is still for you. You’re already in a fight, whether you know it or not. Your spiritual enemy wants to take you out. He’s a master at making strong men weak. Sometimes he does that by making us comfortable, secure, and safe, resigned to a mediocre life because it’s familiar and doesn’t require much from us. Is that really how you want to live?

Though Satan makes strong men weak, God is in the business of making weak men strong.

Your past isn’t the most important thing. Your future is. If you want to live your life — really live it in a bold, passionate, life-giving way that’s contagious — then this book is for you. As we’ll discover and explore together, God often uses the painful moments we dread the most to do something deep within us. It’s how God shapes us to be the men He wants us to be.

If there are no struggles, there is nothing to fight for.

And God has a unique way of awakening the dormant warrior within to fight one battle that prepares us to fight and win an even bigger one.

Not only does God want you to fight, he wants to give you a cause greater than yourself. Then, once you love something enough that you’re willing to die for it, you’ll be set free to live. Consider what the leader Joab said to inspire his warriors in 2 Samuel 10:12: “Be strong, and let us fight bravely for our people and the cities of our God ” (emphasis mine). Fight for a cause greater than yourself. It’s in you.

You know it’s there.
You can feel it.
You have the heart of a warrior.

Maybe you’re thinking, I don’t know, Craig. I’m a laid-back dude, peaceful, live-and-let-live. I’m not really into that whole fight- club scene. Call of Duty’s pretty great and all, but actually, I don’t even know if I know how to fight and would rather not.

It’s okay if you don’t think of yourself as a warrior, at least in earthly terms. But God has made you to fight battles. And He’s given us many spiritual weapons, which we’ll discuss along the way. But for now, just consider that the strongest man is not the one who lifts the most weight but the one who has the most faith.

Others of you may be thinking, There really is a battle brewing. And I can’t afford to lose it. If that’s you, it’s time for you to fight.

Maybe you’re in danger of failing financially. Now is the time to fight like your life depends on it, to get control of your budget and align your priorities with your cash flow.

Perhaps you’re playing with a lustful fire. You keep returning to images and people and places that excite you but also unleash something you’re afraid you can’t control. You’re going to get burned. Decide. Confess and overcome this darkness.

Your marriage might be hanging by a thread. Determine never to surrender. Use love, patience, and forgiveness. Lay down your life and save your marriage. Maybe your kids are making dangerous decisions.

Learn how to fight with faith, with prayer, and with the Word of God. Then, when your enemy attacks, fight for the righteous cause God gave you. Draw a line in the sand. Make your enemy pay. Make sure he gets the message. Don’t cross a warrior. Don’t mess with this man of God. Come out fighting.

And don’t show up for this fight unarmed.

Use the weapons God gave you, and you’ll win. Can you feel it? It’s inside you.

Excerpted with permission from Fight: Winning the Battles That Matter the Most by Craig Groeschel, copyright Zondervan.

What do you need to fight? Do you recognize the warrior within you? Or do you feel weak and defeated? Stop and pray, “Lord, I’m weak. And I need you.” — some of the most powerful words you can say to God. Are you ready to come out fighting? Please join the conversation on our blog! We would love to hear from you!