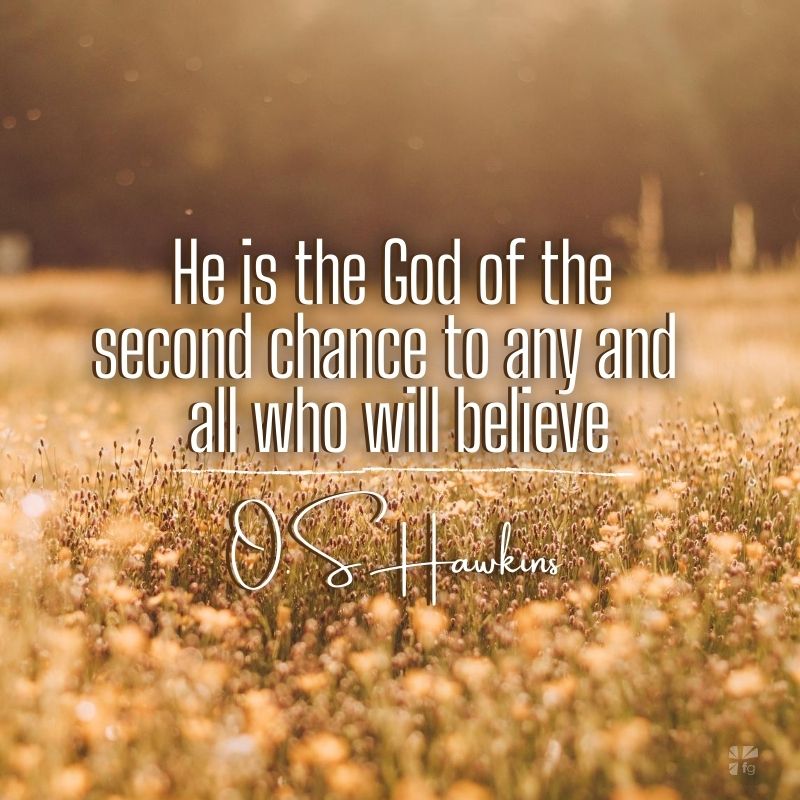 He Is the God of the Second Chance

The pages of history are replete with the heartwarming stories of men and women who have been down and came back to take advantage of the second chance. Abraham Lincoln is a prime example. Defeated for the state legislature in 1832, defeated for Congress in 1843, again in 1848, defeated for the Senate in 1854, then again in 1858, he was elected president of the United States in 1860. In the field of literature, there is John Bunyan who, when thrown into prison, could have easily given up. From his dungeon cell he penned the words of The Pilgrim’s Progress, which have blessed millions across the generations. We all love a comeback story. Tiger Woods, one of the greatest golfers of all time, after being sidelined for years with recurring back surgeries came back to win the 2019 Masters against all odds.

There is something about the human spirit that loves to see people come through when there seems to be no way.

Most of us have heard Jonah’s saga from childhood. God instructed him to go to the city of Nineveh and preach. Instead, he boarded a ship headed in the opposite direction, found himself in a violent storm, was cast overboard, and was swallowed by a great fish. For three days and three nights, he tossed in the belly of that monster as it journeyed through the depths of the sea. Then God commanded the fish, and it “vomited Jonah onto dry land” (Jonah 2:10). And “the word of the Lord came to Jonah the second time” (Jonah 3:1). He took advantage of it, got up, and headed straight for Nineveh and the second chance.

Second chances in life are not only possible, they can be profitable.

But the ultimate comeback story of all time took place two thousand years ago in the city of Jerusalem. The Lord Jesus Christ was crucified on a Roman cross and placed in a borrowed tomb. He was dead. Some of His closest followers, dejected and defeated, even exclaimed, “We were hoping that it was He who was going to redeem Israel” (Luke 24:21). They fled the scene, leaving their hope buried in the tomb. But on the third day Jesus came back. He burst forth from the tomb to live forevermore. Earlier, when Jesus predicted His future resurrection, He pointed back in time to the prophet Jonah as if to say, “I was there with Jonah. Those were My words that came to him a second time.” Once earlier, when asked for some sign of His authenticity, He replied,

Jonah was the sign of our Lord’s own death and resurrection. Our Lord was showing us that He was the One greater than Jonah who would “come back” from the grave, the living Lord and Savior, still offering the second chance today.

It is never too late for a new beginning with Him.

Standing at the grave of Lazarus, Jesus proclaimed,

I often wonder where our Lord inflected this question. I think He may have asked it like this — “Do you, you and you only, you and no one else, do you believe this?” After all, this is life’s bottom-line question. Our personal faith is the only acceptable response to the Christian gospel. Jesus was not inquiring about intellectual assent here. It is one thing to know the gospel on an intellectual level. It is one thing to try to conform to a set of moral standards. But life’s bottom-line question begs to know if you have personally transferred your trust from your own human efforts to Christ and His finished work for your eternal salvation. Do you believe this?

If we look deep enough, we can find Jesus in every book of the Bible. He is here in the midst of the book of Jonah. He is that “word of the Lord” that came to Jonah a second time. He is the God of the second chance to any and all who will believe. You can begin your own comeback story today… by faith… in Him.

Have you been running in the opposite direction of God’s word on your life? How has that been going for you? If your circumstances have gotten worse and worse, maybe it’s time to turn around and head in the path He set for you! Do you believe this? Come share with us on our blog. We want to hear from you! ~ Devotionals Daily