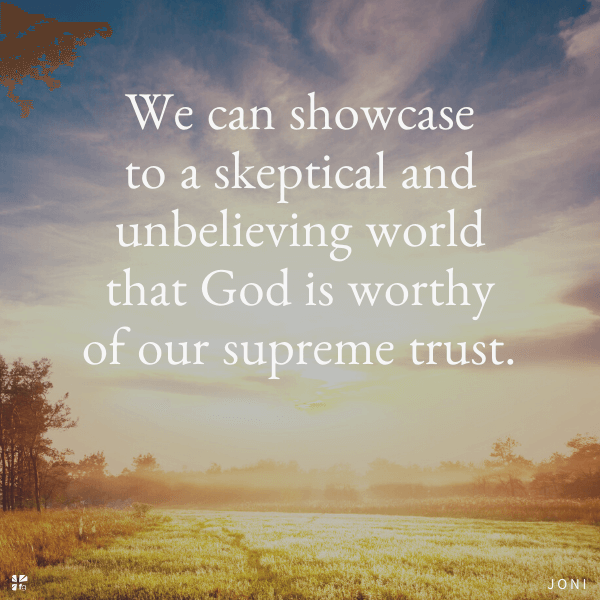 A well-known writer once wrote, “The essential thing ‘in Heaven and in earth’ is… that there should be long obedience in the same direction; there thereby results, and has always resulted in the long run, something which has made life worth living.”

Ask any marathon runner — it’s that seemingly endless run, that tiring stretch in the middle when you either collapse or courage kicks in. And when your second wind surges you forward, you realize afresh that continuing on instead of giving up makes life worth living.

For me, that tiring stretch happened in 2010 when I was diagnosed with stage 3 cancer. A mastectomy. A lengthy recovery. A long regimen of chemotherapy that weakened my lungs. For a quadriplegic in her sixties, this felt like too much.

Yet I had not come this far to cave in now. So whenever a health care worker approached my bedside in the hospital — to draw blood, to infuse chemo, to run scans — I would give them a Joni book. Or a gospel tract. Or an inspirational pamphlet. Anything to make the most of the opportunity to make Jesus real to others. Every time I shared the good news of Jesus, I felt courage kick in.

How joyful are those who fear the Lord… Such people will not be overcome by evil… They do not fear bad news; they confidently trust the LORD to care for them. They are confident and fearless and can face their foes triumphantly.

I learned to live it out every day in the hospital and the chemo clinic.

I viewed my struggle against cancer through the lens of Genesis 50:20, where Joseph said to his wicked brothers,

You intended to harm me, but God intended it for good to accomplish what is now being done, the saving of many lives.

Most people gloss over that last part about the saving lives, but not Ken and me. God allows awful things to happen so that our affliction might turn out for “the saving of many lives,” whether the lives of surgeons, oncologists, nurses, lab technicians, or people in the waiting room. This hope made my long marathon with a fearsome disease brim with purpose.

When I finished my last round of chemotherapy, I was again heartened by these lines from Eugene Peterson. He describes Paul as a “scarred veteran… [who] has visited the extremes.” Then he adds, “And what he knows is that what God has done within him is far more important and lasting and real than anything that could be done to him from the outside.” Cancer showed me that circumstances do not define your character; they reveal and refine it. Little did I know that my cancer would return in 2018 in a more aggressive form.

The hardest part about this new cancer battle was the 33 rounds of radiation that damaged the edges of my lungs, making it even more difficult to breathe. I named the massive radiation machine “Jael,” (Judges 4:14-23) after the heroine in the book of Judges who ruthlessly drove a stake through the head of the commander of the Canaanite armies, saving God’s people. To me, it was a perfect metaphor to describe the rays that obliterated the enemy cancer cells. I know it sounds odd, but it helped to think of the 3-D conformal radiation machine as my ally, not my enemy.

Nevertheless, people wrote, “Joni, isn’t God giving you too much? What possible good could outweigh all of this suffering?” This made me think. Countless Scriptures assure us that God will only do good, not harm, to us, including Jeremiah 32:41 and Psalm 84:11. I’m guessing many of you know this famous promise in Jeremiah 29:11:

‘For I know the plans I have for you,’ declares the LORD, ‘plans to prosper you and not to harm you, plans to give you hope and a future.’

Jeremiah wrote these words to encourage the Judean exiles being dragged off to Babylon as slaves. Their immediate future did not look bright or hopeful.

But the promise revealed God’s ultimate purpose. His people were to remain hopeful that one day all their suffering would end. In the meantime, the children of God would experience the sunshine of His sovereignty through a deepening faith, scarred and seasoned wisdom, profound peace, settledness of soul, and the ironfisted trust honed and hammered out by walking through the valley of the shadow of death.

Like the exiles, we are living in a foreign country, and like them, we can showcase to a skeptical and unbelieving world that God is worthy of our supreme trust.

And I love Him for that.

We can hope in God no matter what is going on, no matter the hardship, no matter how long we wait for His rescue or His return. He’s more interested in what He’s doing in our character because that’s what we’re taking with us to Heaven, friends. That what will last. Come share your thoughts. We want to hear from you! ~ Laurie McClure, Faith.Full