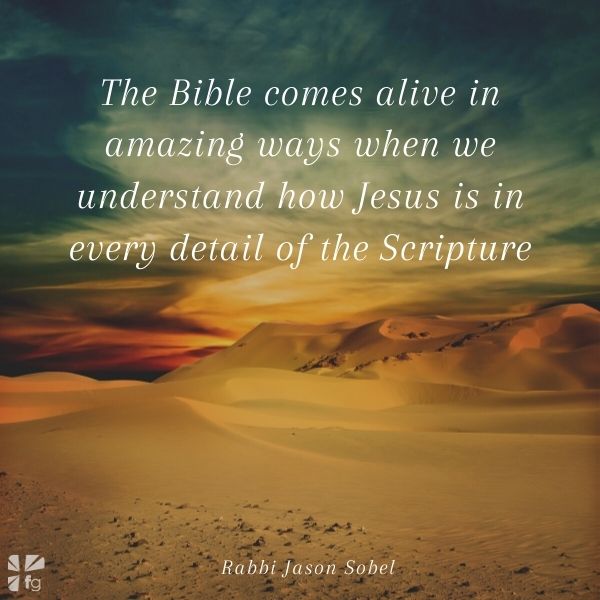 The entire Old Testament points to the coming of the Messiah in the New Testament. We find this from the very first letter and word in Genesis, which reveals that Creation itself was made through the Messiah — that He was the agent of Creation. The story of the Creation sets the foundation of the much larger story that will be revealed in Scripture, which focuses on relationship, redemption, and restoration.

The two disciples trudged down the road to Emmaus. The past few days had been a whirlwind of activity. It had begun when Jesus, whom they believed was the Messiah, had triumphantly entered into Jerusalem and been hailed by the crowds. But this had been quickly followed by Jesus’ arrest and several trials before the Jewish and Roman authorities. Near the end of the week, He had been sentenced to death and led away to be crucified. But now, stories were circulating that Jesus’ tomb was empty — that He had risen from the grave.

It is little wonder the two men were talking about “all the things that had been happening” as they walked (Luke 24:14). But then something unexpected happened. Jesus Himself came up and starting walking along with them, though they were kept from recognizing Him. Jesus could see they were sad and asked what they had been discussing. They recounted all the horror and disappointments they had experienced in the recent days, noting that they had hoped Jesus “was the One about to redeem Israel” (Luke 24:21). They ended with the report they had just received about His tomb being empty and several women seeing a vision of angels.

Oh foolish ones, so slow of heart to put your trust in all that the prophets spoke! — Luke 24:26

He then spoke from the Scriptures to these men, tracking through the Old Testament prophecies to reveal what they said about the Messiah. He taught them the cohesive message of both Testaments, and

then their eyes were opened and they recognized Him, and He disappeared from them. — Luke 24:31, emphasis added

Like these men, my life has been radically transformed as I have delved into the divine connections that reveal the mysteries of the Messiah. And I have seen the lives of many others change as they have learned how the Old and New Testaments connect. When you come to understand the Jewish roots of your faith, you begin to see Jesus’ life and ministry from a different perspective. It is like putting on a pair of glasses and seeing things clearly for the first time — all the richness, sharpness, and clarity of details that you might have otherwise missed.

In this study, it is my hope that you, like those disciples on the road to Emmaus, will come to see the Old Testament story in a new way. It is my hope that your eyes will be opened as you learn how the Jewish roots and Gentile shoots connect. And it is my hope that this exploration of the mysteries of the Messiah will ignite a new love for Jesus and passion for the Bible that will bring you greater hope and transformation in your life.

If you or any of your group members are just getting to know one another, take a few minutes to introduce yourselves. Before you watch the video teaching, pair up with another member (perhaps someone you don’t know that well) and briefly discuss the following questions:

Play the video segment for session one. As you watch, use the following outline to record any thoughts or teachings that stand out to you.

The Bible comes alive in amazing ways when we understand how Jesus is in every detail of the Scripture — in both the New Testament and the Old Testament.

We gain a deeper love, respect, and excitement for the Word of God when we see how the old and the new connect. This is what Jesus was doing on the road to Emmaus with His disciples. As He said,

Every Torah scholar discipled for the Kingdom of Heaven is like a master of a household who brings out of his treasure both new things and old. — Matthew 13:52

From the very first word of the Bible, we see that Creation was made through the Messiah — that He was the agent of Creation. As John wrote,

God saw that sin and sickness would come into the world. In His grace and mercy, before the foundation of the world, He had already determined that Jesus, the Messiah, was going to die for humanity’s sins. This is what is being spoken of in the very first word of Genesis 1.

The first messianic prophecy in Scripture is found in Genesis 3:15. God promises to raise up a redeemer through the Seed of the woman who will reverse the curse and restore the blessing. This is an overarching theme of the Scripture and important for understanding Jesus’ life and death. He is the Seed of the woman — the second Adam.

Jesus’ hands were pierced because humans stole from the tree. His feet were pierced to fulfill the promise that the heel of the messianic Seed would crush the serpent’s head. His pierced side made atonement for the sin of Eve, the one taken from man’s side. The crown of thorns represents Jesus taking the curse of Creation on His head to reverse it and restore the blessing.

Every Hebrew word has a numerical value, and often those values reveal deeper truths about the Scriptures. We find this in the Creation account with the number 6:

6 = number of man (humans created on the sixth day)

6 = day on which man fell (in Jewish thought)

“The number six tells not only of labor, but of ‘labor and sorrow,’ and it specifically marks all that is ‘under the sun,’ all that is ‘not of God.’ ”1

Vav is the sixth letter of the Hebrew alphabet. It appears at the beginning of the sixth Hebrew word of Genesis 1:1, where it functions as the conjunction “and.” Vav connects “heavens” and “earth.” When Adam and Eve sinned, they broke the vav, the connection between heaven and earth, which again, according to Jewish tradition, happened on the sixth day (a Friday).

The world, the flesh, and the enemy wants to make us feel that we have no value. But we have to understand that we are God’s creation. We were made with wisdom.

Now it’s your turn. Take a few minutes in your group to discuss what you just watched. Use the following questions to jump-start your discussion, and make sure to read the Scripture passages. Be open to receive what God is teaching you and doing in your group.

Briefly review the outline for the session one teaching and any notes you took. In the space below, write down the most significant point you took away from this session.

Close by praying aloud together for a few minutes, asking God to work in each person’s heart as you reflect on the con- tent of this session. Write down any specific prayer requests from your group members in the space below so you can continue praying throughout the week.