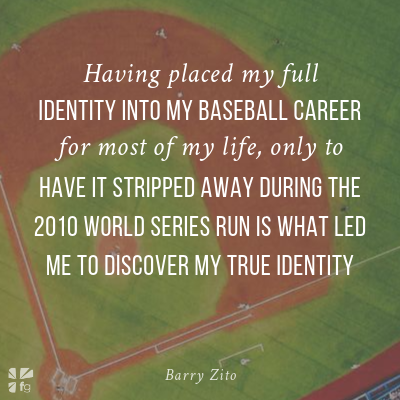 Editor’s Note: For years, Barry Zito lived as a walking personification of the American Dream. Professionally, he was at the top of his game as a Cy Young Award winner in Major League Baseball. Financially, he signed the richest contract ever given to a pitcher — seven years for $126 million. Socially, he was one of the most eligible bachelors in Hollywood. Yet, for years, Barry Zito was miserable. Despite achieving the kind of fame and fortune that most people only dream about, he was plagued by both internal forces and external circumstances that robbed him of any sense of peace—until he finally found a purpose worth living for in Christ. Enjoy today’s excerpt from Barry Zito’s book Curveball: How I Discovered True Fulfillment After Chasing Fortune and Fame. And if you’re interested in other faith-fueled books from the world of sports, check out our collection of sports memoirs and biographies.

If you had told me back when I was a rookie that I would fall short of my and [my] Dad’s baseball goals of twenty years played with three hundred wins, I would have deemed my baseball career a complete failure. And I would have been sure to wear a veil of shame the rest of my life for not making the Hall of Fame. That may sound a little absurd because I did have a pretty good career, but it only proves that, living according to the flesh, there is a void inside of us that cannot be filled any other way than through Christ.

Being blessed to stay healthy, to pitch for fifteen years, and to win a Cy Young and a couple of World Series didn’t matter to my flesh, because it was only concerned with getting more and more while never being satisfied. But now, in being led by the Spirit, my new worldview allowed me to see my career in a way I never could have predicted, with total gratitude and a sense of awe.

In this culture of striving for personal achievement, I know not taking credit for my baseball career sounds strange. Sure, I worked hard and was disciplined, but anyone can commit to those concepts. I don’t know why my body never broke down and I stayed healthy, or why I had a special curveball, or how I helped save the Giants’ season in my St. Louis game in 2012. But I can’t take credit for any of those things. My life is really a mystery to me.

Ever since that day with the Giants chaplain in 2011, I stopped living Barry Zito’s story and began living God’s story. That’s the beauty of giving my life to Christ. I live for Him now. Even though I didn’t realize it until I was thirty-three years old, He was and is the Creator and now gets all the credit for anything good in my life.

Once covered in shame, I now embrace my crooked path in life, because every twist and turn was a part of His story for me. If I did have ten Cy Youngs in my closet and three hundred wins in baseball, I would still be searching for my identity somewhere on the streets of Hollywood.

One of the biggest blessings that came with my relationship with God was my ability to embrace every flaw and mistake from my past. They brought me to the sacred place of total humility that opened the door so Jesus could walk into my life.

He is my Redeemer.

I am at peace with my journey.

I wouldn’t change a thing.

The Tale of Two Rings

“We can rejoice, too, when we run into problems and trials, for we know that they help us develop endurance. And endurance develops strength of character, and character strengthens our confident hope of salvation.” — Romans 5:3-4 NLT

Having been a part of the 2010 and 2012 championship Giants teams, I own two World Series rings. Even at the height of my ego, I never wanted to be “that guy” who flaunted his rings out in public. In fact, I never wore them. Tucked away in my closet for years, those rings never left their cases. But in 2017 an invitation came that changed my mind.

Two years after retiring from baseball, I received a call that I was going to be inducted into the National Italian American Sports Hall of Fame in Chicago. Connecting my heritage from Dad’s side of the family with my fifteen-year baseball career was such an incredible honor.

As I began to plan my speech, God placed something specific on my heart. I told [my wife] Amber, “I think this induction will be the first time I wear my rings out of the house. If I don’t wear them for this, I probably never will.” She was surprised because of how I had always felt about them but was relieved because she never understood why I hid them.

At the event up on the podium, I held up my two rings, one in each hand, and said, “Here’s my 2012 World Series ring. In this run, I was deemed the Giants savior in the NLCS and five days later won game one of the World Series. I definitely earned this one. But here’s my 2010 World Series ring. I didn’t do anything to deserve this one. I wasn’t good enough to make the playoff roster, so out of self-hatred and insecurity I rooted against my own team, hoping they would lose without me. When I walked out onto the field to receive this ring, the entire stadium booed me. This has always reminded me of my greatest failure and for many years I despised this 2010 ring.

“You might think the ring I would be most proud of is my 2012 ring. But that’s not the case. It’s the 2010 ring. Why? Because that ring was much more difficult to earn. Watching my team, game by game, achieve the one thing I wanted more than anything in life, to win a World Series, was the most difficult situation I have endured in my life. Especially because I got signed for a ton of money four years prior to lead them there.

“Having placed my full identity into my baseball career for most of my life, only to have it stripped away during the 2010 World Series run is what led me to discover my true identity. Not in a game, but in Jesus Christ. In 2011, I surrendered my life to Him and after that, any achievements were not my own, but His, including this 2012 ring.

“After stepping back from the intensity and pressure of being in baseball, I see things more clearly now and realize I must embrace my greatest failures, for they are the ones that made me who I am: wiser, stronger, and more equipped for this turbulent ride of life — all through Christ. These two rings may look alike, but in my eyes they are worlds apart. So I’m asking you, what do you value most and why?”

Excerpted with permission from Curveball: How I Discovered True Fulfillment After Chasing Fortune and Fame by Barry Zito, copyright Barry Zito, 2019.

What achievement or possession have you sought in this life that left you unfulfilled? How has Christ been able to give your life the true value you’ve sought? We’d love to hear your thoughts in the comments!