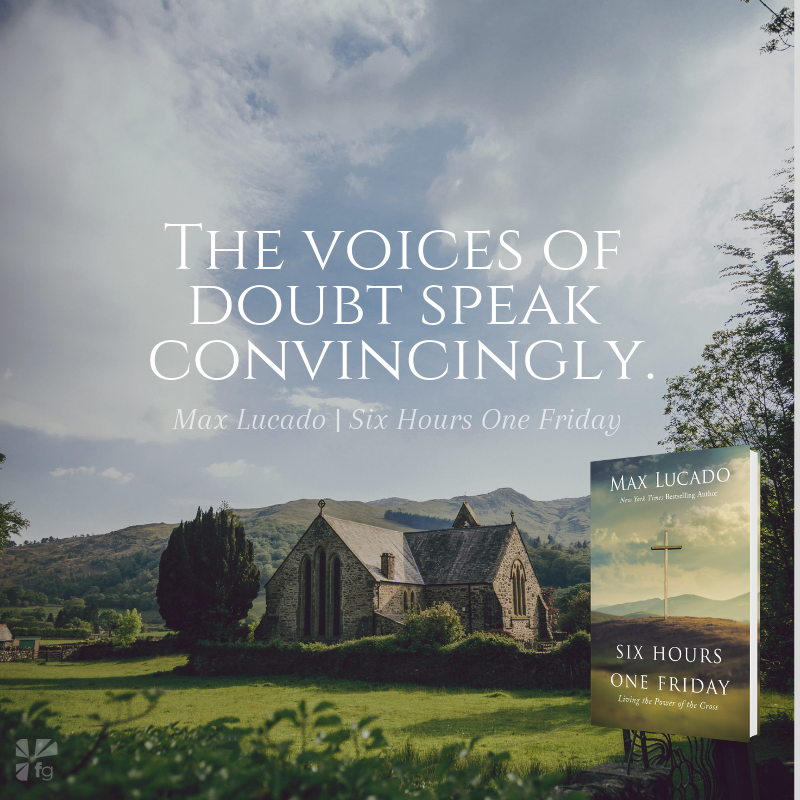 Doubt. He’s a nosy neighbor. He’s an unwanted visitor. He’s an obnoxious guest. Just when you were all prepared for a weekend of relaxation… just when you pulled off your work clothes and climbed into your Bermuda shorts… just when you unfolded the lawn chair and sat down with a magazine and a glass of iced tea… his voice interrupted your thoughts.

“Hey, Bob. Got a few minutes? I’ve got a few questions. I don’t mean to be obnoxious, Bob, but how can you believe that a big God could ever give a hoot about you? Don’t you think you are being presumptuous in thinking God wants you in Heaven?

“You may assume you are on pretty good terms with The Man Upstairs, but haven’t you forgotten that business trip in Atlanta? You think He won’t call your cards on that one?

“How do you know God gives a flip about you anyway?”

He’ll pester you. He’ll irritate you. He’ll criticize your judgment. He’ll kick the stool out from under you and refuse to help you up. He’ll tell you not to believe in the invisible yet offer no answer for the inadequacy of the visible.

He’s a mealy-mouthed, two-faced liar who deals from the bottom of the deck. His aim is not to convince you but to confuse you. He doesn’t offer solutions, he only raises questions.

Don’t let him fool you. Though he may speak the current jargon, he is no newcomer. His first seeds of doubt were sown in the Garden of Eden in the heart of Eve.

There she sat, enjoying the trees, sipping on a mint julep and catching a few rays when she noticed a pair of beady eyes peering over the shrubs.

After a little small talk, he positioned himself between Eve and the sun and cast his first shadow of a doubt.

Did God really say, ‘You must not eat from any tree in the garden’? — Genesis 3:1

No anger. No picket signs. No “God is dead” demonstrations. Just questions.

I suggest you put a lock on your gate. I suggest you post a “Do Not Enter” sign on your door. I also suggest you take a look at an encounter between a fitful doubter and a faithful God.

Abraham, or Abram as he was known at the time, was finding God’s promises about as easy to swallow as a chicken bone. The promise? That his descendants would be as numerous as the stars. The problem? No son. “No problem,” came God’s response.

Abram looked over at his wife, Sarah, as she shuffled by in her gown and slippers with the aid of a walker. The chicken bone stuck for a few minutes but eventually slid down his throat.

Just as he was turning away to invite Sarah to a candlelight dinner, he heard promise number two.

“All this land will be yours.”

Imagine God telling you that your children will someday own Fifth Avenue, and you will understand Abram’s hesitation. “On that one, Father, I need a little help.” And a little help was given.

It’s a curious scene. Twilight. The sky is a soft blue ceiling with starry diamonds.

The air is cool. The animals in the pasture are quiet. The trees are silhouettes. Abram dozes under a tree. His sleep is fitful.

It’s as if God is allowing Abram’s doubt to run its course. In his dreams Abram is forced to face the lunacy of it all. The voices of doubt speak convincingly.

How do I know God is with me? What if this is all a hoax? How do you know that is God who is speaking? The thick and dreadful darkness of doubt. The same darkness you feel when you sit on a polished pew in a funeral chapel and listen to the obituary of the one you love more than life.

The same darkness you feel when you hear the words, “The tumor is malignant. We have to operate.”

The same darkness that falls upon you when you realize you just lost your temper… again.

The same darkness you feel when you realize the divorce you never wanted is final.

The same darkness into which Jesus screamed, “My God, my God, why have you forsaken me?”

Appropriate words. For when we doubt, God seems very far away.

Which is exactly why He chose to draw so near.

God had told Abram to take three animals, cut them in half, and arrange the halves facing each other. To us the command is mysterious. To Abram, it wasn’t. He’d seen the ceremony before. He’d participated in it. He’d sealed many covenants by walking through the divided carcasses and stating, “May what has happened to these animals happen also to me if I fail to uphold my word.” (Jeremiah 34:18)

That is why his heart must have skipped a beat when he saw the lights in the darkness passing between the carcasses. The soft golden glow from the coals in the firepot and the courageous flames from the torch. What did they mean?

The invisible God had drawn near to make his immovable promise.

And though God’s people often forgot their God, God didn’t forget them. He kept His word. The land became theirs.

God didn’t give up. He never gives up.

When Joseph was dropped into a pit by his own brothers, God didn’t give up.

When Moses said, “Here I am, send Aaron,” God didn’t give up.

When the delivered Israelites wanted Egyptian slavery instead of milk and honey, God didn’t give up.

When Aaron was making a false god at the very moment Moses was with the true God, God didn’t give up.

When only two of the ten spies thought the Creator was powerful enough to deliver the created, God didn’t give up.

When Samson whispered to Delilah, when Saul roared after David, when David schemed against Uriah, God didn’t give up.

When the children of Israel were taken into captivity, God didn’t give up.

He didn’t give up.

When He became flesh and was the victim of an assassination attempt before He was two years old, He didn’t give up.

When the people from His own hometown tried to push Him over a cliff, He didn’t give up.

When His brothers ridiculed Him, He didn’t give up.

When He was accused of blaspheming God by people who didn’t fear God, He didn’t give up.

When people spat in His face, He didn’t spit back. When the bystanders slapped Him, He didn’t slap them. When a whip ripped His sides, He didn’t turn and command the awaiting angels to stuff that whip down that soldier’s throat.

And when human hands fastened the divine hands to a cross with spikes, it wasn’t the soldiers who held the hands of Jesus steady. It was God who held them steady. For those wounded hands were the same invisible hands that had carried the firepot and the torch two thousand years earlier. They were the same hands that had brought light into Abram’s thick and dreadful darkness. They had come to do it again.

So the next time that obnoxious neighbor walks in, escort him out. Out to the hill. Out to Calvary. Out to the Cross where, with holy blood, the hand that carried the flame wrote the promise, “God would give up His only Son before He’d give up on you.”

Jesus has not given up! He’s not given up on you no matter what you’ve done. He will not turn His back. He will not forget you. He will not let you go. If you believe in Him, He will never ever be taken off His list. He paid for you! Come share your thoughts with us on our blog. We want to hear from you!

Join Us For Our Easter Online Bible Study 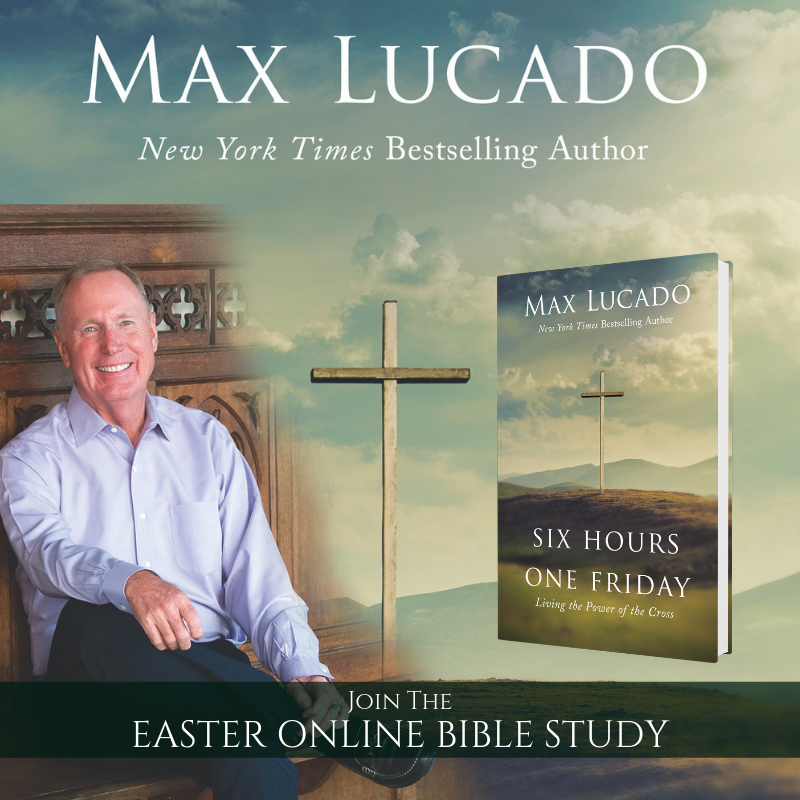 Does the grave appear to be the final stop? According to Christ, your death is just the start of the something great. There is a truth greater than all the losses and sorrows of life. And it can be discovered in the life, death, and resurrection of Jesus Christ.

Come back to the foot of the Cross and draw near to the Savior.