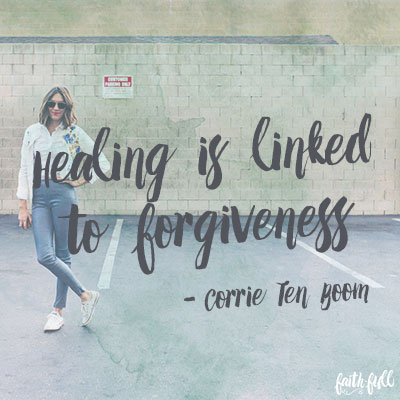 Editor’s Note: Corrie ten Boom, arrested for hiding Dutch Jews from the Nazis, survived the horrors of a concentration camp to astonish the world by forgiving her tormentors. Enjoy this excerpt of 7 Women and the Secret of Their Greatness and be exhorted to forgive as Corrie did.

Each had something to forgive, whether it was a neighbor who had turned him in to the Nazi authorities or a vicious camp guard or a brutal soldier.

In mid-May 1945 the Allies marched into Holland, to the unspeakable joy of the Dutch people. Despite the distractions of her work, Corrie was still restless, and she desperately missed her beloved Betsie. But now she remembered Betsie’s words: that they must tell others what they had learned.

Thus began more than three decades of travel around the world as a “tramp for the Lord,” as Corrie described herself. She told people her story, of God’s forgiveness of sins, and of the need for people to forgive those who had harmed them.

Corrie herself was put to the test in 1947 while speaking in a Munich church. At the close of the service, a balding man in a gray overcoat stepped forward to greet her. Corrie froze. She knew this man well; he’d been one of the most vicious guards at Ravensbrück, one who had mocked the women prisoners as they showered. “It came back with a rush,” she wrote, “the huge room with its harsh overhead lights; the pathetic pile of dresses and shoes in the center of the floor; the shame of walking naked past this man.”

And now he was pushing his hand out to shake hers, and saying:

“A fine message, Fraulein! How good it is to know that, as you say, all our sins are at the bottom of the sea!”

And I, who had spoken so glibly of forgiveness, fumbled in my pocketbook rather than take that hand. He would not remember me, of course — how could he remember one prisoner among those thousands of women?

But I remembered him and the leather crop swinging from his belt. I was face to face with one of my captors, and my blood seemed to freeze.

“You mentioned Ravensbrück in your talk,” he was saying. “I was a guard there… But since that time,” he went on, “I have become a Christian. I know that God has forgiven me for the cruel things I did there, but I would like to hear it from your lips as well. Fraulein” — again the hand came out —“will you forgive me?”

And I stood there — I whose sins had again and again to be forgiven — and could not forgive. Betsie had died in that place — could he erase her slow terrible death simply for the asking?

The soldier stood there expectantly, waiting for Corrie to shake his hand. She “wrestled with the most difficult thing I had ever had to do. For I had to do it — I knew that. The message that God forgives has a prior condition: that we forgive those who have injured us.”

Standing there before the former S.S. man, Corrie remembered that forgiveness is an act of the will — not an emotion. “Jesus, help me!” she prayed. “I can lift my hand. I can do that much. You supply the feeling.”

Corrie thrust out her hand.

And as I did, an incredible thing took place. The current started in my shoulder, raced down my arm, sprang into our joined hands. And then this healing warmth seemed to flood my whole being, bringing tears to my eyes.

For a long moment we grasped each other’s hands, the former guard and the former prisoner. I had never known God’s love so intensely as I did then. But even so, I realized it was not my love. I had tried, and did not have the power. It was the power of the Holy Spirit.1

Excerpted with permission from 7 Women: And The Secret Of Their Greatness by Eric Metaxas, copyright Thomas Nelson.

Can you imagine the strength and faith that it took for Corrie to even lift her hand to greet this former S.S. captor? Few of us have stories as horrific as Corrie’s, but all of us have personal stories of brokenness, mistreatment, betrayal, heartbreak, and hurt that are attached to a person or people that we need to forgive. And it may feel impossible. Many times I’ve called out, “Lord, I cannot forgive this. Not this!” Maybe the Lord is asking you and me for to be willing to step out in faith so that He can provide the feelings of forgiveness… What can you do to follow that urging from Him today? Come join the conversation on our blog. We want to hear from you about your test of forgiveness. ~ Laurie McClure, Faith.Full