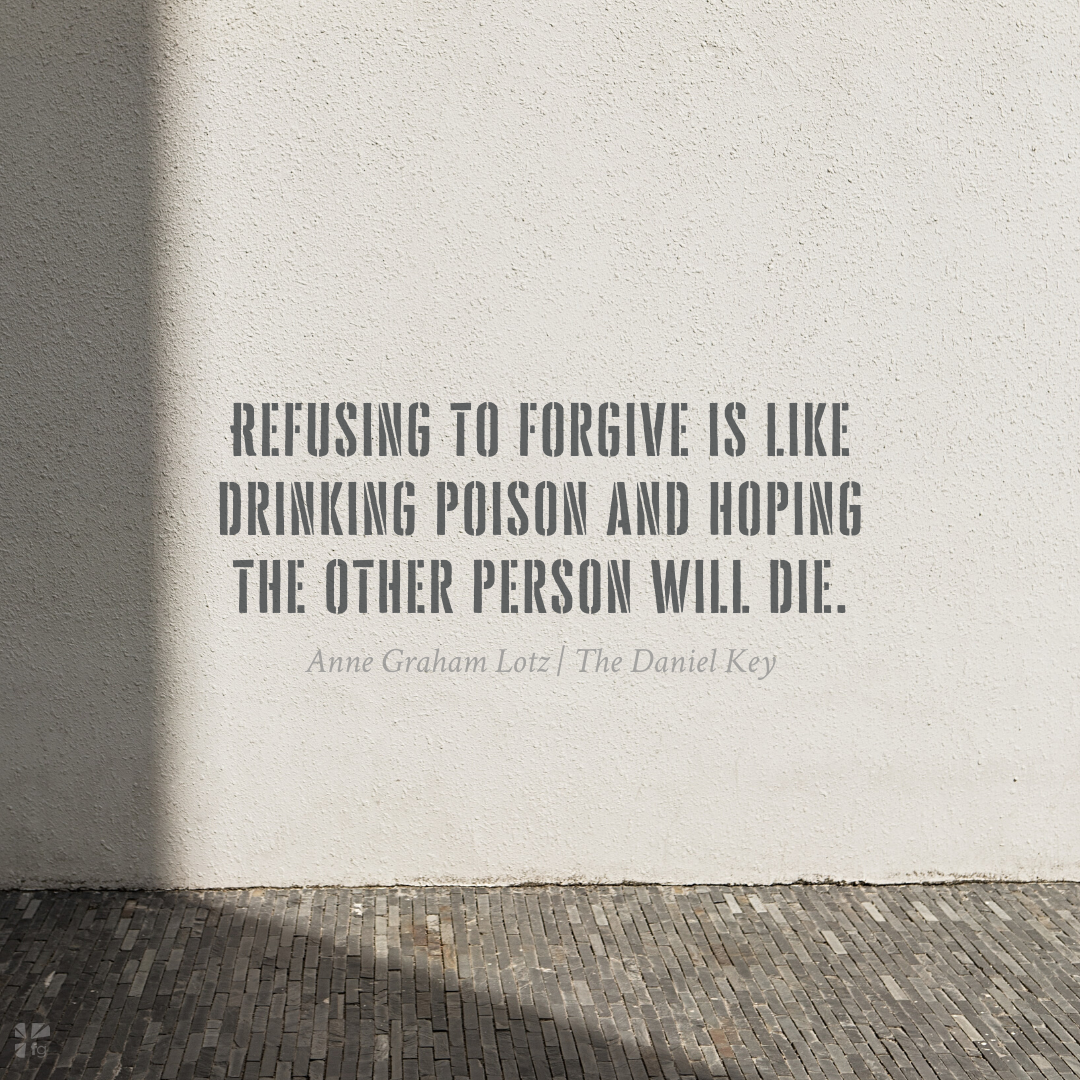 Bear with each other and forgive whatever grievances you may have against one another. Forgive as the Lord forgave you. — Colossians 3:13

The Bible doesn’t tell us if Daniel struggled with forgiving those who inflicted pain in his life: betrayal, injustice, unfairness, slander, accusations, and even persecution. The list would have been a lengthy one that surely would have included Nebuchadnezzar, who had captured and enslaved him, killing many of his friends, neighbors, and perhaps even his family members in Jerusalem; cruel guards; jealous coworkers; resentful born-and-bred Babylonians. But Daniel must have made the choice to forgive, and then lived in that forgiveness.

Forgiveness is not pretending that I have not been hurt, or saying that what the other person did was not wrong. It is not letting my offender “get by with it” by not holding him or her accountable.

I’ve learned that forgiveness is an intellectual choice I am commanded to make. If it were a feeling or an emotion, I couldn’t obey the command since I can’t necessarily control my emotions and feelings. It’s a choice, pure and simple. If I only offered forgiveness to those who ask for it, or those who deserve it, or those I feel like forgiving, there are some people I would never forgive. But it’s a decision that I make because I am commanded to forgive for one very simple reason: God has forgiven me (Ephesians 4:32; see also Matthew 6:15). As an act of grateful worship, I choose to forgive others.

But my decision to forgive needs to be followed with an act of love that’s sacrificial in nature. I need to do something for the person I am forgiving — something that is costly. Something I would do for no other reason than that it’s my act of worship — worship of the One who laid down His life for me as His own act of sacrificial, loving forgiveness.

I have a dear friend, Barb,1 whose mother had never ceased to find fault with her. Ever since Barb was a little girl, her mother criticized everything she did. Barb told me that months before Christmas every year, she began to feel nauseated because selecting the expected gift was so traumatic. It didn’t matter what the gift was, her mother would not be pleased. Barb dreaded Christmas for that reason alone.

Barb and her mother were involved with other family members in a business venture. One particular year, Barb’s mother actually took out a lawsuit against her involving the business. At the same time, the older woman was moving out of the home she’d had for decades and into a condominium — and Barb was helping her move! As if that weren’t enough, Barb was a fabulous seamstress, and she sewed the drapes and other things for her mother’s new home.

Barb had dropped by my house one morning, and I remember looking incredulously at her. She was standing on my front steps when I challenged her bluntly, “Barb, how can you do it? How in the world can you help your mother, sew for her, do all these other things, while she is suing you in court?” I will never forget Barb’s response. She taught me a life lesson that I’ve been able to share with others.

“Anne, I’ve chosen to forgive my mother,” she replied. “But I have to tell you, every time my mother comes to mind, every time I see her or hear the sound of her voice, I have to forgive her all over again. Jesus has taught me to forgive seventy times seven [see Matthew 18:22 NKJV] — to place no limits on my forgiveness. But when I made the choice to forgive her, I also made the decision to love her sacrificially. Helping her is my way of showing her I’ve forgiven her and that I love her. And actually, it has helped me let go. I have been set free from bitterness, anger, and resentment.” I looked at Barb’s gentle expression, the light of joy in her eyes, and I knew she was speaking the truth.

She was free— free to forgive, free to love.

Don’t underestimate the power of forgiveness in your own life. While others may remain distant, hardened, cold, and vengeful, and respond negatively to your forgiveness — if they respond at all— the very act of forgiveness fleshed out in sacrificial love will begin the healing process in you. And sometimes it does make a difference in the other person.

Although there was no evidence at the time, Barb’s forgiveness and love softened her mother’s heart. As Barb chose to move forward, within a few years, she had the privilege of leading her mother to receive God’s love by placing her faith in Jesus Christ for her own forgiveness. Shortly thereafter, her mother stepped into eternity. The sting of her mother’s death and the victory of the grave were removed as a result of the powerful choice Barb had made to forgive.2

What difference will forgiveness make? You won’t know until you choose to forgive.

Before Your Cross I kneel and see the heinousness of my sin, my iniquity that caused You to be “made a curse,” the evil that excites the severity of divine wrath.

Show me the enormity of my guilt by the crown of thorns, the pierced hands and feet, the bruised body, the dying cries.

Your blood is the blood of incarnate God, its worth infinite, its value beyond all thought.

Yet Your compassions yearn over me, Your heart hastens to my rescue, Your love endured my curse, Your mercy bore my deserved stripes.3

In expression of my worship of You, I forgive others as I have been forgiven.

For the glory of Your great name,

Is your life on the verge of being mired in the quicksand of your past? If you were to come under scrutiny, as Daniel did, would there be little cobwebs of unforgiveness, bitterness, and resentment deep in the recesses of your heart, pulling you down? Isn’t it time you turned everything over to the One who said, “Vengeance is Mine, I will repay” (Romans 12:19 NKJV)? Trust God to sort things out. He is the Judge who will make it right in the end. In the meantime, you are free to love. Come share your answers to those questions on our blog!