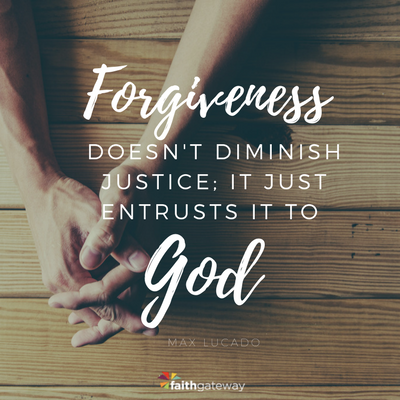 Revenge builds a lonely house. Space enough for one person. The lives of its tenants are reduced to one goal: make someone miserable. They do. Themselves.

No wonder God insists that we “keep a sharp eye out for weeds of bitter discontent. A thistle or two gone to seed can ruin a whole garden in no time” (Hebrews 12:15).

His healing includes a move out of the house of spite, a shift away from the cramped world of grudge and toward spacious ways of grace, away from hardness and toward forgiveness. He moves us forward by healing our past.

Can He really? This mess? This history of sexual abuse? This raw anger at the father who left my mother? This seething disgust I feel every time I think of the one who treated me like yesterday’s trash? Can God heal this ancient hurt in my heart?

Joseph asked these questions. You never outlive the memory of ten brothers giving you the heave-ho. They walked away and never came back. So he gave them a taste of their own medicine. When he saw them in the breadline, he snapped at them. He accused them of treachery and threw them in jail. “Take that, you rascals!”

Isn’t it good to know that Joseph was human? The guy was so good it hurt. He endured slavery, succeeded in a foreign land, mastered a new language, and resisted sexual seductions. He was the model prisoner and the perfect counselor to the king. Scratch him, and he bled holy blood. We expect him to see his brothers and declare, “Father, forgive them, for they knew not what they did” (see Luke 23:34). But he didn’t. He didn’t because forgiving jerks is the hardest trick in the bag. We will feed the poor and counsel the king. Why, we’ll memorize the book of Leviticus if God says to do so.

Don’t let the sun go down while you are still angry (Ephesians 4:26)?

Let all bitterness, wrath, anger, clamor, and evil speaking be put away from you, with all malice (Ephesians 4:31)?

As Christ forgave you, so you also must do (Colossians 3:13)?

I have a friend who was six years old when her mother ran off with a salesman, leaving her to be raised by a good-hearted dad who knew nothing about dolls, dresses, or dates. The father and daughter stumbled through life and made the best of it. Recently the mom reappeared, like a brother out of Canaan, requested a coffee date with my friend, and said, “I’m sorry for abandoning you.” The mom wants to reenter her daughter’s world.

My friend’s first thought was, That’s it? I’m supposed to forgive you? Seems too easy. Doesn’t the mom need to experience what she gave? A few years wondering if she will see her daughter again. Some pain-filled nights. A bit of justice. How do we reconcile the pain of the daughter with God’s command to forgive?

Isn’t some vengeance in order? Of course it is. In fact, God cares about justice more than we do. Paul admonished, Never pay back evil for evil… never avenge yourselves. Leave that to God, for he has said that he will repay those who deserve it (Romans 12:17, Romans 12:19).

We fear the evildoer will slip into the night, unknown and unpunished. Escape to Fiji and sip mai tais on the beach. Not to worry.

Scripture says, “[God] will repay,” not He “might repay.”

God will get through this execute justice on behalf of truth and fairness. Case in point? Prepare yourself for the most surprising turnaround of the Joseph story.

After three days Joseph released all but one brother from jail. They returned to Canaan to report to Jacob, their father, a weak shadow of an old man. The brothers told him how Simeon was kept in Egypt as assurance they would return with Benjamin, the youngest brother. Jacob had nothing to say except, “You have bereaved me: Joseph is no more, Simeon is no more, and you want to take Benjamin. All these things are against me” (Genesis 42:36).

Such a louse. Jacob played favorites, refused to discipline, had multiple wives, and upon hearing of the imprisonment of his son, had a pity party. What a prima donna. No wonder the family was screwed up.

But as we read further, a light breaks through the clouds. Judah, who once wanted to get rid of Joseph, stepped forward. “Send [Benjamin] with me, and we will arise and go, that we may live and not die, both we and you and also our little ones. I myself will be surety for him; from my hand you shall require him. If I do not bring him back to you and set him before you, then let me bear the blame forever” (Genesis 43:8–9).

Is this the same Judah? The same man who said, “Let us sell him to the Ishmaelites” (Genesis 37:27)? The same brother who helped negotiate the slave trade? Well, yes… and no. Judah, as it turns out, has had his own descent into the pit.

After Joseph’s abduction Judah went on to have three sons. He arranged for the eldest to marry a girl named Tamar. But the son died. Following the proper protocol of his day, Judah arranged for his second son to marry Tamar. The son didn’t manage the situation well and died. Judah assumed Tamar was jinxed. Afraid that his third son would meet the same fate, Judah put the matter on hold, leaving Tamar with no husband.

Later Judah’s wife died. Tamar heard that Judah was coming to town. Apparently she hadn’t been able to get Judah to reply to her e-mails, so she got creative. She disguised herself as a prostitute and made him an offer. Judah took the bait. He exchanged his necklace and walking stick for sex, unaware that he was sleeping with his daughter-in-law. (Oh, how lust blinds a man!) She conceived.

Three months later she reappeared in Judah’s life as Tamar, pregnant Tamar. Judah went high and mighty on her and demanded she be burned. That’s when she produced Judah’s necklace and walking stick, and Judah realized the child was his. He was caught in his own sin, disgraced in front of his own family. Things had come full circle. Judah, who had deceived Jacob, was deceived. Judah, who had trapped Joseph, was trapped. Judah, who had helped humiliate Joseph, was humiliated. God gave Judah his comeuppance, and Judah came to his senses. “She has been more righteous than I,” he confessed (Genesis 38:26).

For years I wondered why Judah’s exploits were included in the Joseph narrative. They interrupt everything. We just get started in chapter 37 with the dreams and drama of Joseph when the narrator dedicates chapter 38 to the story of Judah, the hustler, and Tamar, the faux escort. Two dead husbands. One clever widow. An odd, poorly placed story. But now I see how it fits.

For anything good to happen to Jacob’s family, someone in the clan had to grow up. If not the father, one of the brothers had to mature to the point where he took responsibility for his actions.

God activated the change in Judah. He gave the guy a taste of his own medicine, and the medicine worked! Judah championed the family cause. He spoke sense into his father’s head. He was willing to take responsibility for Benjamin’s safety and bear the blame if he failed. Judah got his wake-up call, and Joseph didn’t have to lift a finger or swing a fist.

Vengeance is God’s. He will repay — whether ultimately on the Day of Judgment or intermediately in this life.

The point of the story?

God handles all Judahs. He can discipline your abusive boss, soften your angry parent. He can bring your ex to his knees or her senses. Forgiveness doesn’t diminish justice; it just entrusts it to God.

He guarantees the right retribution. We give too much or too little. But the God of justice has the precise prescription.

Unlike us, God never gives up on a person. Never. Long after we have moved on, God is still there, probing the conscience, stirring conviction, always orchestrating redemption. Fix your enemies? That’s God’s job.

Forgive your enemies? Ah, that’s where you and I come in. We forgive.

“Do not let the sun go down on your anger, and do not give the devil an opportunity” (Ephesians 4:26–27). The word translated opportunity is the Greek word topos, the same term from which we get the English noun topography. It means territory or ground. Interesting.

Anger gives ground to the devil. Bitterness invites him to occupy a space in your heart, to rent a room. Believe me, he will move in and stink up the place. Gossip, slander, temper — anytime you see these, Satan has claimed a bunk.

Evict him. Don’t even give him the time of day. In the name of Jesus tell him to pack his bags and hit the road. Begin the process of forgiveness. Keep no list of wrongs. Pray for your antagonists rather than plot against them. Hate the wrong without hating wrongdoers. Turn your attention away from what they did to you to what Jesus did for you. Outrageous as it may seem, Jesus died for them too. If He thinks they are worth forgiving, they are. Does that make forgiveness easy? No. Quick? Seldom. Painless? It wasn’t for Joseph.

The brothers returned to Egypt from Canaan, Benjamin in tow. Joseph invited them to a dinner. He asked about Jacob, spotted Benjamin, and all but came undone. “God be gracious to you, my son,” he blurted before he hurried out of the room to weep (Genesis 43:29).

He returned to eat and drink and make merry with the brothers. Joseph sat them according to birth order. He singled out Benjamin for special treatment. Every time the brothers got one helping, Benjamin got five. They noticed this. But said nothing.

Joseph loaded their sacks with food and hid his personal cup in the sack of Benjamin.

The brothers were barely down the road when Joseph’s steward stopped their caravan, searched their sacks, and found the cup. The brothers tore their clothes (the ancient equivalent of pulling out one’s hair) and soon found themselves back in front of Joseph, fearing for their lives.

Forgiveness vacillates like this. It has fits and starts, good days and bad. Anger intermingled with love. Irregular mercy. We make progress only to make a wrong turn. Step forward and fall back. But this is okay. When it comes to forgiveness, all of us are beginners. No one owns a secret formula. As long as you are trying to forgive, you are forgiving. It’s when you no longer try that bitterness sets in.

Stay the course. You’ll spend less time in the spite house and more in the grace house. And as one who has walked the hallways of both, I can guarantee that you are going to love the space of grace.

Where are you on the journey of forgiveness? Have you made progress? Have you seemed to start back at ground zero and been frustrated? Do you have people in your life that, even after a relatively long period of time, you can’t seem to forgive. Come join the conversation on our blog! We want to hear from you! ~ Devotionals Daily