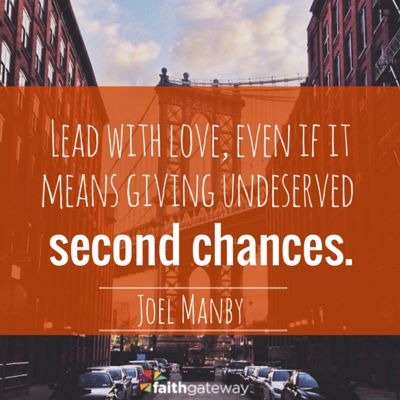 The longer you hold a grudge, the longer the grudge has a hold on you. — Jeff Henderson, Buckhead Church

Has anyone ever done you wrong? Forgiving is very difficult, I know. Whether or not you were able to forgive has probably shaped you in one way or another.

Here’s the issue: you may have been wronged and deserve to hold a grudge. But the real question is, what purpose does it serve? Is holding a grudge effective?

We love to imagine exactly how we would tell off the person who wronged us or dream about how we might take revenge. Holding a grudge can feel good, and we all have a story of being wronged that seems to justify our grudge. But what was done to us doesn’t matter in the end — all that matters is how we respond.

Have you ever forgiven someone who has wronged your organization and seen redemption?

Have you ever forgiven someone who has wronged your organization and regretted it when that person reoffended? When should you draw the line?

Have you ever witnessed the positive ripple effect forgiveness can have, even beyond your power to comprehend? Do you ever feel trapped and limited by the grudges you hold?

Eric is a very bright eighteen-year-old who worked as a seasonal employee at our Stone Mountain Park attraction in Atlanta. The oldest of seven brothers and sisters, he has never had a permanent father figure in his life, so all of the money Eric earns goes right back to his family.

One day last year, Eric was terminated for violating company policy. I had met Eric once but didn’t know him and was unaware that he had been released. A week or so later, I received a message from Eric through Facebook. He apologized for what he had done and asked if I would consider giving him another chance. I wouldn’t normally get involved in an issue like that, but I was impressed with Eric’s tone. He was contrite, and he admitted he had made a mistake and was sorry for it. In addition, I was impressed with what I saw in the rest of Eric’s Facebook profile; he seemed like a humble and decent young man.

I emailed our general manager and the head of human resources at Stone Mountain, Gerald and Michael, and asked that Eric’s file be reviewed. I made it clear I was not asking that Eric be rehired — simply that his dismissal be reevaluated based on Eric’s heartfelt request.

Forgiving Someone Who Has Wronged the Organization

Gerald and Michael decided to give Eric another chance after he passed all tests regarding knowledge of our policies and procedures.

About a month after Eric rejoined Stone Mountain Park, I called Gerald to see if he would invite Eric to an Atlanta Braves baseball game, and the two of them could be my guests. Gerald checked his schedule and replied, “Joel, I will check with Eric, but he is scheduled to work that day, and I know that he will not want to take the time off. He really wants the hours, because his family needs his financial help.” Gerald was correct; Eric worked instead.

I continued to reach out to Eric occasionally via Facebook. My heart went out to an eighteen-year-old who wouldn’t take time away from work because he was trying to keep his family above water financially. That was humbling and reminded me of my dad’s work ethic.

The next spring, about six months after Eric contacted me on Facebook, I was walking through Stone Mountain Park and ran into Eric. He looked happy and full of energy. I said, “Hey, Eric, great to see you. How ya doing?”

He replied, “Mr. Manby, I… um… I am doing just fine, sir. Hey, I was… um… I was wondering if you might be willing to come to my high school graduation.”

My world seemed to stop as I absorbed his question. Scenes of my entire experience with Eric flashed through my mind — his dismissal, his Facebook message, his request for another chance, his work ethic, his efforts to support his family, his ability to overcome obstacles. I thought I was an insignificant influence in his life, yet he was asking me to attend his graduation. I felt my throat tighten, and tears welled up in my eyes. I couldn’t get any words out.

I fumbled for my smart phone in an effort to look away from Eric, but I could hardly read the screen through my tears. My emotions surprised me, but I managed to get the words out: “Um, let me check my schedule here.”

I gathered myself, wiped away the tears, and found the date: May 21. Amazingly, I had just that day canceled a commitment for the same weekend. “Eric,” I said, looking up at him, “I would be honored to be there. Thanks for asking me.”

“Thanks,” he said, smiling.

As his broad six-feet-four-inch frame walked away, I felt so proud of Gerald and Michael. They had given Eric another chance, and a fine young man who had the odds stacked against him was able to succeed.

Eric finished his senior year in high school and got a letter of recommendation for the naval academy from a US senator. Although he was not accepted to the academy, we were told the biggest reason was his lack of extracurricular activities — but that was because Eric was always working to support his family! Life isn’t always fair.

On May 21, Gerald and I attended Eric’s graduation. After the ceremony, I had a wonderful time meeting Eric’s mother and all of his siblings. I told Eric how proud I was of him, and after we took a few pictures, Gerald and I left him alone to be with his family. Eric enlisted with the army, and he will get his college education through military assistance programs.

How does a leader know when to forgive someone? When do you rehire an employee who was released but wants another chance? What happens if you give someone a second chance and that person messes up even worse? We don’t have a set formula at Herschend Family Entertainment, but we encourage our leaders to use a set of questions to help them make the right decision:

Is this a one-time offense or a recurring theme? What is the person’s track record and reputation? Was this offense inconsistent with everything else we have witnessed concerning this person’s character and reputation?

What is the person’s self-awareness of his or her shortcoming? Does this person have a contrite heart about the offense? Did he or she apologize? Do I really believe the offense won’t happen again?

Give the offender the benefit of the doubt if you’re not sure, giving him or her another chance to make it right.

When I was a new board member at HFE and Jack Herschend was still chairman of the company, the board seemed disappointed with Jack because he was not moving fast enough to replace people who were not hitting their numbers. Jack said in a very calm but very stern voice, “I would rather be known for moving too slow than moving too fast.” Wise words from a wise man.

Because of Jack’s example, I would also rather be known for being slow to fire and quick to forgive instead of being quick to fire and slow to forgive. Not every leader agrees with these words, but if you’re still reading, I suspect you’re a leader who deeply desires to transform the way your organization functions.

Leading with love, even if it means giving undeserved second chances, is the right way to build an organization for long-term health.

I know what some of you are thinking: Joel hasn’t seen my situation! Perhaps not, but I have lived through enough difficult second chance scenarios to know they don’t always end well.

That doesn’t mean, however, that we shouldn’t give second chances.

I have led multiple team members who were alcoholics or drug addicts or suffered from mental illness. One — we’ll call her Betty — was a senior executive with a stellar track record who started showing signs of inconsistency. Betty started leaving early from work, not acting like herself in meetings, and displaying strange behavior on phone calls. Next came a DUI. Then a separation from her husband. After that, rehab. The company paid for her rehab program — an expensive thirty-day treatment — and held her job open. She came back stronger, and her performance improved.

However, it didn’t last. She went in and out of rehab a few more times, resulting in her being demoted to a lesser but still senior role. Betty’s performance was not as productive as in the past, and the pattern of exiting and reentering rehab didn’t show signs of changing.

I struggled with the decision. Although she no longer reported to me in her new role, I felt I needed to be the one who made the call. It wasn’t fair to her new boss to force that decision on him. I sought counsel from longtime executives who understood the culture of the company. After Betty had a few more additional stints in rehab, I finally decided to give her a severance package.

The story didn’t end well. Betty never shook her dependence on alcohol, and she died at the age of fifty-eight. Her funeral was incredibly sad.

In hindsight, I don’t regret the second and third and sixth chances we gave Betty. She made her own choices, and no leader can truly control what an employee chooses. But what a leader can control is his or her own actions. In Betty’s case, we acted honorably and truthfully.

Forgiveness is sometimes agonizing, and it doesn’t always lead to a happy ending. I am not suggesting that we toss out our organizational standards and goals — simply that we keep our hearts soft enough to be open to forgiveness.

It may not always be the easiest thing to do, but it’s always the right thing.

For Eric, forgiveness did end well; giving him a second chance was a small pebble in a pond. The ripples fanned out from our decision to rehire him. Eric was able to support his family, finish high school, and serve in the army. And soon after he will attend college. Who knows how far the ripples from that act of forgiveness will continue to spread?

Have you been in a position where you had to choose to forgive and give someone a second chance or to say no because of the nature of the offense. Come share your story on our blog! We would love to hear from you!