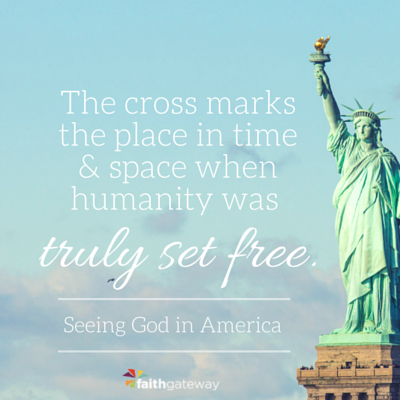 As for me, God forbid that I should boast about anything except the cross of our Lord Jesus Christ. — Galatians 6:14

A gift like no other, it has become the ultimate symbol around the world for freedom and democracy. Erected in New York Harbor and dedicated in October 1886, the Statue of Liberty was a gift of friendship from the people of France. For millions of immigrants drawing near to New York City after long ocean voyages, Lady Liberty was one of the first glimpses of America. On the day she was dedicated, the tricolor French flag veiled her face. In a dramatic flourish, the designer and sculptor himself climbed the 354 steps within his own creation to release the flag and unveil the noble, now-familiar face. The statue is 151 feet high, from base to torch — 351 feet with pedestal and foundation included. The seven points on her crown represent the seven seas and the seven continents of the world.

In other words, Liberty is a universal yearning, not just a national symbol.

At the turn of the twentieth century, the great structure fell under the jurisdiction of the United States Lighthouse Board because the Lady’s illuminated torch served as a navigational aid for ships entering the harbor. The statue became, then, a symbol and something much more.

It is the same with the cross of Jesus Christ. Across the world, it is an easily recognizable symbol of Christianity. In reality, however, it is a real and powerful navigational tool that has guided untold millions out of darkness, superstition, selfishness, addiction, and despair, bringing them into relationship with their Creator. To those who live apart from Christ, the cross is a religious icon or decorative emblem. But for those who have experienced its mighty transformational power, the cross is more like a shining torch lifted high on a dark night, welcoming them to safety.

Lord Jesus, thank You for the cross. If it wasn’t for that place and time in history where You laid down Your life for me, I would have no hope at all. But now I have every hope — of meaningful life today and a future in Heaven.

The cross marks the place in time and space when humanity was truly set free.

Watch the Trailer for Seeing God in America

Today, those of us in America celebrate our freedom with gratitude to God, but worldwide we Christians can celebrate our freedom in Jesus Christ! Consider the cross today as your “shining torch lifted high on a dark night, welcoming” you to safety and rejoice in your freedom! Join the conversation on our blog! We want to hear from you! ~ Devotionals Daily