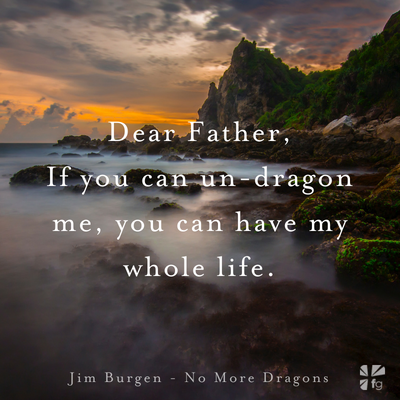 From Dragon to Boy

The story takes place in a magical world called Narnia, and it’s about a boy named Eustace and a few of his friends. Eustace is arrogant, selfish, unfriendly, and generally disliked by almost every other character in the story. During their travels throughout the vast world of Narnia, the children run the ship ashore on a mysterious island. Eustace wanders off by himself and ends up stumbling upon a cave containing a dragon’s hoard of treasure.

Eustace, who is a greedy kid, realizes he could be as rich as a king in Narnia if he keeps the treasure for himself. Exhausted from the excitement of discovering the dragon’s riches, Eustace falls asleep on top of the towering stack of crowns, jewels, and gold coins. When Eustace wakes up the next morning, he has been transformed into a dragon. He sees his reflection in a lake and realizes he is nothing but a monster: “Sleeping on a dragon’s hoard with greedy, dragonish thoughts in his heart, he had become a dragon himself.”¹

In Narnia, if you think dragon thoughts and do dragon things, eventually you will become a dragon.

I was sitting on the edge of my front-row seat in a university classroom, listening to a country preacher tell a story about a boy in an imaginary world who turned into a mythical dragon, and my chest started to feel tight. My heart started to beat faster. I had tears in my eyes. He was telling my story. This story was about me.

Becoming a dragon is a dangerously sneaky process. Becoming a dragon takes a long string of bad choices and decisions you don’t even realize you’re making until it’s too late. One day you glance at yourself in the mirror, and a monster is staring back at you. You think back on your life, add up your countless mistakes, and realize you aren’t who you used to be. You aren’t who you want to be. You’re not who you were created and designed to be. Instead, you’re a dragon.

As I sat in that classroom in East Tennessee, I came to a realization: it was not difficult to screw up my life. But how would I ever unscrew it? The nineteen-year-old boy in Tennessee had the same problem as the little boy in Narnia: I knew I didn’t want to be a dragon anymore, but I didn’t know how to stop.

Back to the Narnia story. Eustace sadly walks into the forest. He is alone, confused, and defeated. He has resigned himself to the fact that he will always be a dragon and there is no hope for change. This is precisely when he meets Aslan, the talking lion. For those of you who are not familiar with C. S. Lewis’s Chronicles of Narnia, Aslan represents Jesus in these stories.

Aslan looks Eustace in the eyes and beckons to him. Fearful yet strangely compelled, Eustace follows the huge lion to a mountaintop garden. Standing by a well of clear water, Aslan instructs the boy-turned-dragon to undress.

At first Eustace is confused, because he isn’t wearing any clothes. But then he remembers that he’s a giant lizard, and all reptiles can shed their skin. So Eustace tries to free himself. He painfully tears away at his layer of scales, but underneath is another layer. He begins ripping into the new layer, but underneath is yet another layer. He continues to repeat this process until he is absolutely exhausted from the pain. He simply can’t do it anymore and whimpers to Aslan in defeat.

Aslan replies, “You will have to let me undress you.”²

Back in Tennessee, I had ceased breathing ten minutes prior. I was more aware than ever that the story was not about a little boy in a fantasy world called Narnia. The story was, without a doubt, written about me. I didn’t want to be a dragon anymore, but I couldn’t fix myself. I needed to have Jesus do it for me.

In the story, Eustace reluctantly and fearfully agrees to let Aslan shed his scales. He lies down on his dragon back, and Aslan plunges his enormous claws into Eustace’s chest. The pain is unbearable. Finally, the lion reaches deep into the chest cavity of the dragon and pulls out a small, trembling boy who is dripping with filth.

Aslan then throws Eustace’s pale body into the waters of the well, and in a few moments, Eustace breaks the surface of the water and gasps for air. He is no longer a dragon. He is finally the boy he was created to be. He is washed, clean, changed, and made whole. His friends are no longer scared of him. In fact, when his friend Edmund sees Eustace, he exclaims, “You have been — well, un-dragoned.”³

When Tommy finished telling the story, I had tears streaming down my face. I needed to be washed, cleaned, changed, and made whole. And I knew there was only one person who could do that for me. I then uttered the prayer that changed my entire life:

Dear Father, if you can un-dragon me, you can have my whole life.

I wish I could say I never again did anything that dragons do, but that’s not true. I can tell you that my life gradually began to change after I bumped into Jesus in that classroom in East Tennessee. God changed me through a story written by a dead English theologian about a fantasy world where little boys can become dragons and then, with the help of a giant lion, become little boys again.

As Jesus started to strip the scales from my back, I began wanting different things for my life. I started thinking about different stuff. I wanted to learn more about the loving, gracious, holy yet approachable God and his Son who came to earth. I desired to know this Jesus, who wanted to tell me he loved me despite the things I had done instead of lecture me about what a disappointment I was. I finally saw that, in spite of the long list of reasons God could hate me, He didn’t. He not only loved me, but He wanted us to live together — me with Him and Him with me. He wanted to change my life, not just after my funeral in some far-off place called Heaven, but right then and there and every moment after.

God had been tapping on my shoulder for quite some time. Hey, Jim. Hey, Jim. Hey, Jim! My reply to His faint call had consistently been, “Go away!” But on that day in Tennessee, God didn’t tap me on the shoulder. He hit me over the side of the head with a two-by-four and shouted, Jim, will you just talk to Me?

I want you. I want all of you.

Looking back over those years, I can see that His voice was always there. He was always whispering to me. Always pursuing me. All He ever wanted me to do was talk with Him, but my consistent attitude was, “Yeah, right! I know how that conversation will go. It will start with how disappointed You are in me. You’ll follow that with a few ‘you should have known betters’ and ‘how could you be so stupids?’ Then, at some point, You will hit the big, red ‘Go directly to hell’ button, and I’m firewood for eternity. No thanks. I’m not interested in that conversation.”

There is a train. And if you pretend there isn’t, it will eventually flatten you.

From that point on, God and I began to talk more. I brought up my sins and my mistakes. He didn’t. I gave him my laundry list of failures, fears, insecurity-driven lies, and poor choices. He didn’t. He didn’t throw one thing in my face. I mattered so much to Him, and my past sins didn’t. He had forgiven them.

My hunger to know God more, my failing grades in chemistry, and my disgust for anything tooth related prompted me to change my major to biblical studies and sociology. Studying God and studying people seemed like a good combination. It also led to a wrestling match with God.

It happened in a parking lot behind Robin’s dorm the beginning of my junior year. The Hey, Jim! tapping on the shoulder had graduated into a loud but distinct voice saying, Hey, Jim! I want you to be a pastor.

Of course, my prayerful response was, Dear heavenly Father, no. In Jesus’ name, amen.

There was no way I was going to become a pastor! I had seen the church thing. I had met some of “God’s people,” and (no offense) they were the biggest collection of weirdoes and turds ever assembled. They spoke in their own language, one that wasn’t about anything real or helpful. They referred to Jesus, but usually only to manipulate people into doing stuff they didn’t want to do.

“No way, God! I’ve been there. I’ve seen it. I bought the T-shirt, and I’m never going back. I was run over by Your church, and I’m not going to let it happen again. Find someone else.” The shouting match lasted several hours that night until I finally struck up a deal with God on a curb in the parking lot. (I’m not sure if you’re allowed to do that, but I did, and I wasn’t struck by lightning.)

The deal went something like this: “Okay, God. I’ll do it… on one condition. I’ll do it as long as You let me talk about real stuff. I want to talk about real problems and real life in real ways to real people. If I’m allowed to be real and talk about the stuff that nobody ever talked to me about, then I’ll do it. Do we have a deal?”

The heavens were silent.

There was no giant beam of light splitting the sky. There was no thundering voice rolling over the campus. There was no supernatural, floating hand scribbling messages on the asphalt. But the peace that followed that conversation might as well have been a bullhorn straight from the throne of God himself saying, Talk about real issues in a real way? That’s all I ever wanted from you anyway.

Do you have a similar story of Jesus wooing you, tapping you on the shoulder, un-dragoning you, and calling you out for something bigger? Come share with us on our blog! We want to hear from you about how you screwed up your life and Jesus is in the process of unscrewing it! ~ Devotionals Daily