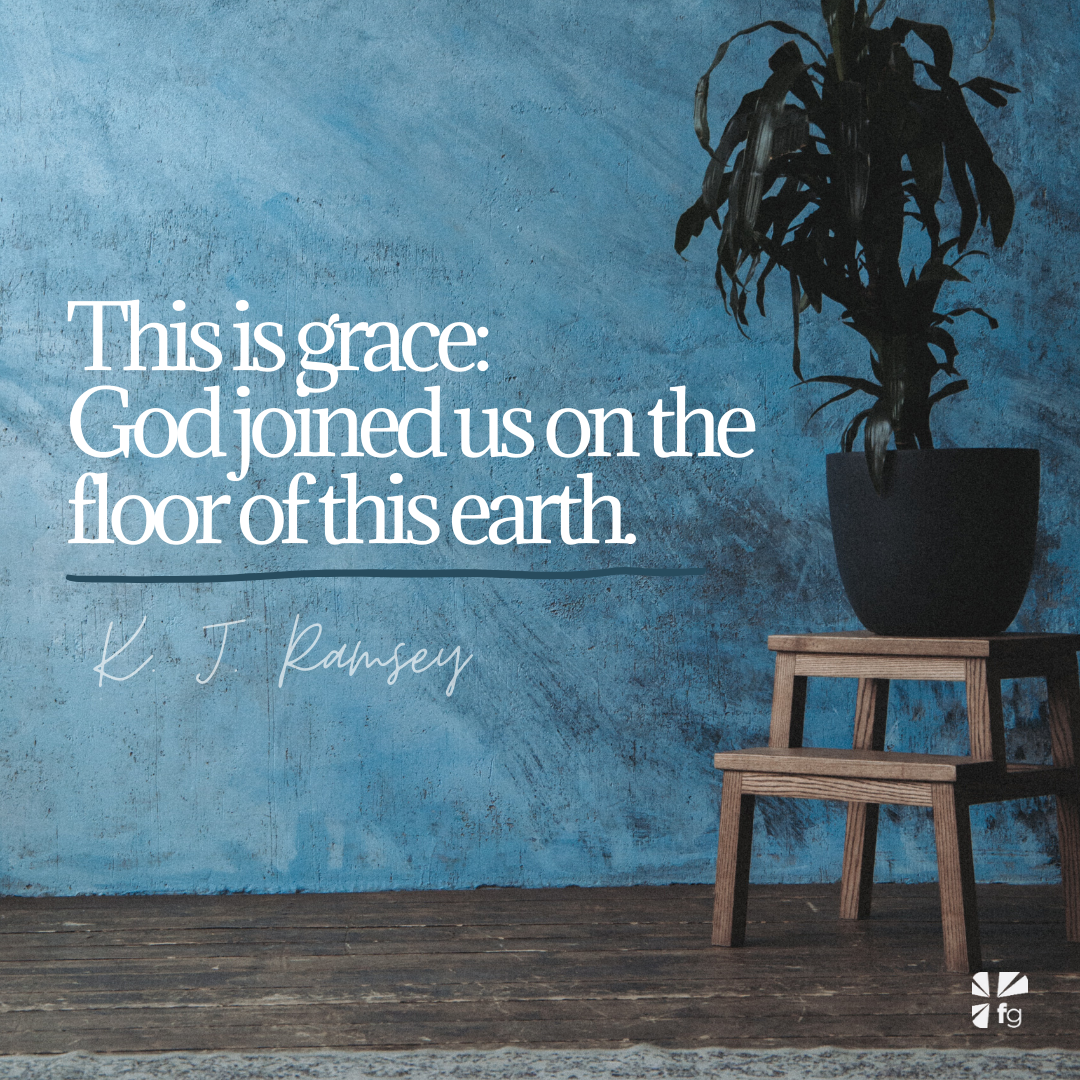 The Savior assumed a body for Himself, in order that the body, being interwoven as it were with life, should no longer remain a mortal thing… He put on a body, so that in the body he might find death and blot it out. — Athanasius, On the Incarnation

Only the suffering God can help. — Dietrich Bonhoeffer, Letters and Papers from Prison

The year I got sick, I was a resident assistant tasked with emotionally and spiritually supporting a group of nearly thirty college women. I spent hours each day in the library writing papers, the day punctuated by meals and coffee dates with women from my dorm. After copious amounts of tea sipped between fervid research binges, I would walk across the dark, quiet campus to my hall, where I would stay up even later attending to the tears of peers getting over breakups or venting anger about their roommates.1

Suffering has an inelegant way of reversing relationships, and where I was used to being the comforter, I suddenly found myself learning the harder role of recipient. Out of nowhere the majority of my life consisted of crying tears of my own within the confines of four cinderblock walls, too sick on most days to even get out of bed. The body that had effortlessly carried me through the winding, steep paths of my mountainous college campus could now barely hold itself up in bed. The limbs that climbed limestone cliffs between classes now struggled to walk fourteen steps to the bathroom.

At night I often couldn’t sleep because of pain, and after hours of no relief, I’d cry from the excruciation. One suitemate in particular would often find me awake in the middle of the night, weeping on the floor of our shared study room. Instead of turning the other way or quipping about how early she had to get up for an exam, Katie would join me on the floor, massaging my aching hands as I sobbed into her chest.

In the first half of my college experience, I had started to better learn the Gospel story, where weakness is welcome and hurt is held. But I didn’t know it yet in my limbs and ache and shame. I had to learn that on the floor, where Katie came to find me, willingly holding my weak body in her embrace. When I went to college, I signed up for an education of books and lectures. I didn’t realize the education I would need for the rest of my life was the nearness of Christ and His body to the indignity, brokenness, and shame in my own.

This is grace: God joined us on the floor of this earth.

God did not stay far from our pain. He did not judge it from a distance. He did not pity it from the other side of the universe. He became it.

Grace is solidarity instead of scrutiny. This is the power that sustains us when suffering lingers.

God took on the human condition you and I so struggle to bear so we could be enfolded in His love.

Love consists in this: not that we loved God, but that He loved us and sent His Son to be the atoning sacrifice for our sins. — 1 John 4:10

Many of us are confused about the purpose of Christ’s coming and the heart of our hope, often without realizing it, and the confusion amplifies our pain when suffering lingers. The very persistence of suffering might not fit with the hope we thought we had or the Jesus we thought we were serving.

We’ll keep looking in the wrong places for grace in our suffering if we don’t reexamine and rearticulate the substance of our hope and the message of our Lord.

Jesus said His Father’s purpose in sending Him to earth was for Him to bring the Kingdom of God near to us (Mark 1:15; Luke 4:43). But our churches often collapse His message and our hope into salvation from sin. Many unintentionally reduce the Gospel to a disembodied cure and moment of transformation, neglecting to give us the scaffolding of story and solidity of physical experience needed to build a life on God’s promises. Jesus came “to seek and to save the lost,” (Luke 19:10) and He seeks and saves us into a new reality of experiencing His presence, memory, and story. We are saved not only from sin. We are saved to join and enjoy a Kingdom where Christ reigns in love, is restoring all that has been broken by the curse of sin, and is personally present in and among us.2

In His coming, Jesus brought the Kingdom of God near to us, so near that His Spirit now lives in us, comforting us and filling us with a presence that brings life. The Kingdom of God is both our hope and the grace that carries us toward hope’s fulfillment. It is a reality we take part in now, even as we continue to feel the heavy weight of brokenness.3 Right now “the whole world lies in the power of the evil one” (1 John 5:19 ESV). But the Father “has rescued us from the domain of darkness and transferred us into the kingdom of the Son He loves.” (Colossians 1:13)

The future of God’s good reign has already been set in motion with the resurrection and ascension of Jesus and the gift of His Spirit. Salvation is already here, but its fullness awaits Christ’s second coming. The wholeness of our salvation is a guaranteed reality that sculpts our present existence. As New Testament scholar Gordon Fee writes, our present is shaped by “the singular reality that God’s people belong to the future that has already come present. Marked by Christ’s death and resurrection and identified as God’s people by the gift of the Spirit, they live the life of the future in the present, determined by its values and perspective, no matter what their present circumstances.”4

Christ has brought His kingdom near, and He will extend its fullness when He returns. The timing of His return is beyond our understanding,5 but we wait now with a patience powered by the Spirit’s presence and an eagerness to experience Christ’s life even in the midst of death.

Rather than pining after some distant day when we will make it to Heaven, we base our hope on the reality that Jesus is creating a new earth where those who are united to Him will live, play, sing, and love with redeemed physical bodies in a redeemed physical world as a redeemed people united in worship and radiant in diversity.

Our hope is not in being beamed up to Heaven upon death with suddenly perfected bodies. Our hope is informed and colored by John’s vision in Revelation 21: the New Jerusalem comes down from Heaven. Hope in suffering is never for a disembodied day when we can finally escape the bodies, relationships, and circumstances that have caused us so much pain. Biblical hope is expressed not in certainty but in curiosity, hearts that acknowledge and accept Jesus is already King, lives that look for the restoration of His rule right here, people propelled by a willingness to see Jesus turn every inch of Creation from cursed to cured. The relationships that were broken will be made right; our relationship to our bodies, each other, the earth, and God will be fully and finally restored.

The Kingdom is already and not yet; living in its tension rather than panicking for release is the only way to be pulled into the trajectory of hope.

1 A version of this story first appeared in Fathom. K.J. Ramsey, “The Education I Never Signed Up For,” Fathom (September 11, 2018), www .fathommag .com/stories/ the-education-i-never-signed-up-for.

2 I first heard this concept of “saved from” versus “saved to” in an undergraduate doctrine course at Covenant College with Dr. Kelly Kapic.
3 As citizens of the kingdom of God, we experience two conflicting realities. As theologian and pastoral counselor Eric Johnson writes, “Humanity is unknowingly under the degrading and enslaving influence of Satan (1 John 5:19), along with the ‘powers and principalities’ (Eph. 6:12), and the earth is now the site of a spiritual battle going on between Satan and his forces and God and his, ultimately limited by God’s power and plan.” If we fail to remember this, the bitterness of death will unnecessarily overpower the flavor of life Christ continuously offers us. Eric L. Johnson, God and Soul Care: The Therapeutic Resources of the Christian Faith (Downers Grove, IL: InterVarsity Press, 2017), 132.

Excerpted with permission from This Too Shall Last by K. J. Ramsey, copyright Katie Jo Ramsey.

Are you on the floor physically or emotionally right now. Jesus is with you there. The Kingdom is already and not yet. We hope for what is to come, but remain here for now. Thank Jesus, He is with us! Come share your thoughts with us on our blog. We want to hear from you. ~ Devotionals Daily