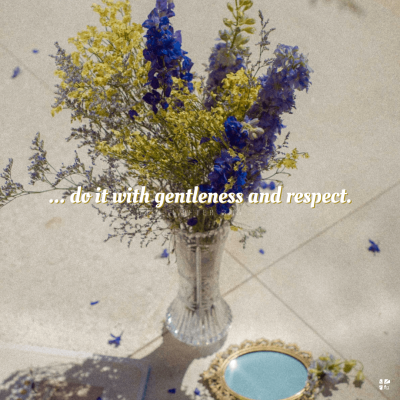 Do not be conformed to this world, but be transformed by the renewal of your mind. — Romans 12:2

As the world becomes angrier and more divided, our path in the political arena is not always clear. But it is clear what we are not supposed to be: like the rest of the world.

Something has gone terribly wrong. When it comes to our engagement in the public square, Christians are not very different from everyone else. We, too, have become immersed in outrage stories. We, too, have become outspoken advocates without taking time to understand the arguments of the other side. We, too, are always ready to doubt the motives of our oppo­nents and speak with contempt about their policies — and just as likely to take a shot at the other side on Facebook or Twitter. Too often, Christians are empowering these trends rather than resisting them.

And, most critically, we seem to be more worried about los­ing our country than we are about losing our God. Too many of us see the public square as a place where we can use God for our own desires and ends rather than be used by God for His desires and ends. Too many of us have sold our birthright as citizens of the city of God, choosing instead to bear up our swords to battle for our piece of the city of man. What is needed in America today is a group of people who are different, who are walking in their birthright as citizens of the city of God — a movement powerful enough to push the country in a new direction.

I cannot count the number of times I have seen wonderful examples of people of faith using their talents and treasure to bring about a better society. When I was mayor of Knoxville, Hurricane Katrina hit the Gulf Coast. As it became apparent that more and more residents of Louisiana would need to be evacu­ated, the Federal Emergency Management Agency (FEMA) put out a request for cities to host evacuees. Almost immediately the churches in our city — urban, suburban, and rural — volunteered their people and buildings to welcome those who had lost their homes. As governor, no matter where I went in the state, it always seemed that it was the church that was taking the lead on issues ranging from unequal education opportunities to health care in underserved areas.

Unfortunately, I have also seen how easy it is to hurt our cause by our political actions. When our politics direct our faith, rather than our faith directing our politics, we end up in the wrong place.

Too many of us react out of fear and anger when it seems that the country is not going in the direction we want it to go.

During the Katrina crisis, we developed a protocol for receiving the people FEMA sent our way. We wanted to make sure that, in the midst of the horrible circumstances, the evacuees felt as wel­come and comfortable as possible while they were with us. FEMA was using a combination of National Guard aircraft and chartered commercial aircraft to fly people out of New Orleans. We placed teams of people at our airport to greet them and provided transportation to where they would be staying. The colonel of our Air National Guard facility and I boarded each plane to welcome them to Knoxville and explain the logistics of their next move.

The initial flights were well organized and went off without a hitch. Meanwhile, back in New Orleans, circumstances were deteriorating. As time went on, voluntary evacuations turned into mandatory evacuations. By the time our last couple of planes arrived, most of those passengers had been forcibly evacuated from their homes or from the streets of New Orleans. It became apparent that the primary objective of FEMA was to make certain that these folks got out of New Orleans before conditions worsened.

When our final planeload of evacuees arrived, the situation onboard was nearly indescribable. (I’m told one of the evac­uees on the flight later wrote a book about his experience and described me as “some dude in a tie, smiling like a game show host.”) The plane was a chartered Delta aircraft. When I boarded, I saw the flight attendants huddled together in the galley. Even the air marshal on the flight seemed afraid. The cabin was full of an interesting slice of New Orleans nightlife. After all, these folks were the last to leave, and they left only because they were forced. There were numerous dogs roaming around the cabin. One woman had a snake wrapped around her neck. More than a few had terrified looks on their faces.

When I boarded the plane and said, “Welcome to Knoxville, Tennessee,” the cabin erupted in shouting. It seemed that, in their urgency to get everyone out of New Orleans, the authorities had been telling people whatever they needed to tell them to get them on the plane. Almost all the passengers were told they were going somewhere besides Knoxville. Most were mad, confused, or afraid. I kept hearing, “This is not where I wanted to go.”

Too often, Christians have reacted like the people on that flight. We thought our society was going to end up somewhere else. As our culture seems to grow increasingly secular, we have landed in a place we did not want to go. The days of daily Bible verses being printed in the newspaper and the Ten Commandments being posted in the classroom are mostly gone. Church atten­dance is no longer a cultural expectation, and Sundays are for Starbucks, not Sabbath worship. The fastest ­growing religious affiliation for Americans is “none,” with 26 percent of the population now describing themselves as atheist, agnostic, or “nothing in particular.”1 The definition of marriage has changed, even as marriage and beginning a family are being pushed off until later in life. As one friend noted, “Culturally, it feels like we went from being the home team to the visiting team in my lifetime.”

The apostle Peter was no stranger to reacting out of fear in a world that seemed to be slipping away. On the night before He died, Jesus walked in the Garden of Gethsemane with His disciples. Tipped off by Judas, soldiers approached Jesus to arrest Him. Peter, fearful that this could mean the end of his vision for Jesus to gain political power, pulled out his sword and took a swing at one of the men. Before Jesus could tell Peter to put away his sword, Peter had cut off the ear of a servant of the high priest.

This younger Peter seems a far cry from the older and wiser Peter who instructed us,

Always [be] prepared to make a defense to anyone who asks you for a reason for the hope that is in you; yet do it with gentleness and respect. — 1 Peter 3:15

For most of us, that is the problem. We don’t know how to do that. We don’t know how to give a defense for the hope that is in us, and we certainly don’t know how to do it with gentleness and respect in a world that is rapidly changing. We have not thought through what we believe and why we believe it; we have only built a fear of what the other side might do and what we might lose. Fear is always a bad beginning place. As Nietzsche said, “He who fights with monsters should be careful lest he thereby become a monster.”2

Not only have we not taken time to understand the other side’s arguments, we have no understanding of our own blinders and misconceptions. Driven by the passions of today’s political debate and inflamed by media focused on cultivating outrage, our language and actions look just like everyone else’s. The polarization of politics has tempted all of us to pick sides in this increasingly bitter battle. What has been lost is the people of faith asking ourselves the hard questions about whether or not our politics match what we say we believe. Do our political actions match our theology, or has our theology been taken captive to our political beliefs?

Staying gentle and respectful in today’s political climate is… rare… to say the least! But, that’s what we’re called to be as believers in Christ! We represent Him and in order to show Him to the world around us, we have to embody love. It’s a tall order, but with the Holy Spirit within us, we can do it! ~ Devotionals Daily