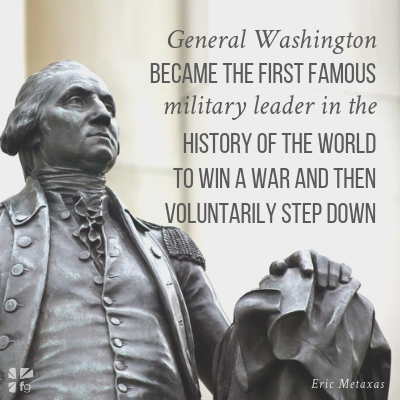 When it comes to true greatness, George Washington’s tough to beat. But someone’s greatness can sometimes lend him an aura of such outsized fame that we begin to think of him not as a real person but as a cartoon superhero or as a legend. That’s often the case with Washington.

As you know, he has a state named after him. (Do I need to say which?) And he has our nation’s capital city named after him; he has a soaring obelisk monument in that city; his birthday is a national holiday; and he has a huge bridge named after him right here in my hometown of New York City. And if all these things aren’t impressive enough, his face is on the dollar bill! (Perhaps you already knew that.) So who really thinks of him as an actual flesh-and-blood human being who struggled as we all struggle and who put on his breeches one leg at a time? That’s the problem with being that famous. People often don’t really think about you as a person at all.

If you do think of him, you probably think of George Washington as that old guy with the somewhat sour expression on the aforementioned dollar bill. In that over familiar picture, sporting heavily powdered hair and a lace-trimmed shirt, he looks almost as much like an old woman as an old man.

But what I’ve discovered is that this famous portrait has given many of us an outrageously false picture of who Washington actually was. It presents him as an elderly man with chronic denture discomfort, who looks none too happy for it. But the reality is completely different.

What if I told you that in his day, George Washington was considered about the manliest man most people had ever seen? No kidding. Virtually everyone who knew him or saw him seemed to say so. He was tall and powerful. He was also both fearless and graceful. On the field of battle, he had several horses shot out from under him; on the dance floor, he was a much sought-after partner.

There’s so much to say about Washington that it’s hard to know where to begin. For one thing, he was a man of tremendous contradictions. For example, the man who became known as the father of our country never fathered children himself. And he lost his own father when he was a young boy. The man who was viewed as deeply honorable actually told some real whoppers when he was a young man, despite Parson Weems’s fictitious episode by the cherry tree: “I cannot tell a lie.” More than anyone else, he is responsible for freeing American colonists from the greatest military power on earth—the British Empire—and yet he held some three hundred black men, women, and children in bondage at Mount Vernon.

But here’s the biggest contradiction: Washington was an extremely ambitious young man who worked hard to achieve fame, glory, land, and riches—yet at a pivotal moment in American history, he did something so selfless that it’s difficult to fully fathom. It’s principally because of this one thing that he’s included in this book.

So what did he do? In a nutshell, he voluntarily gave up incredible power. When you know the details of his sacrifice, it’s hard to believe that he did what he did of his own free will. And yet he did it. The temptation not to surrender all that power must have been extraordinary. There were many good reasons not to surrender it, but history records that he somehow did. Somehow he made an impossibly grand sacrifice—and in doing so he dramatically changed the history of the world. Had Washington not been willing to do it, America as we know it almost certainly would not exist. That’s not hyperbole.

This is why contemporary memorials to Washington describe him as an American Moses, as someone loaned to Americans from God. He was the right man for his time—arguably the only man who could have successfully birthed the American Experiment. If you wonder whether one person’s actions can matter, and if you wonder whether character matters, you needn’t look any further than the story of George Washington.

Announcing that he had something else to read to the men, Washington now reached into his uniform pocket and slowly pulled out a letter penned by a Virginia congressman. Washington unfolded it and began to read aloud, appearing to stumble over the words. Reaching into his waistcoat pocket, the general produced a pair of wire-rimmed spectacles. His men had never seen them before, although the fifty-one year-old general had been using them as reading glasses for some time.

Washington apologized for the delay, saying, as he unfolded the spectacles and put them on: “Gentlemen, you must pardon me. I have grown gray in your service and now find myself growing blind.”

Somehow, these disarming, humble, and spontaneous words, spoken by the exceptional man standing before them, took everyone by surprise, and in an instant, the mood of the angry, battle-hardened men was utterly changed. Indeed, many of them wept openly as Washington read the letter and then quietly walked out of the room. The powerful temptation to crown Washington king or dictator and to wrest from Congress all control of the fledgling nation had been dealt a death blow—and the Nicola and Armstrong letters were cast upon the ash heap of history.

Who can imagine that the liberty of millions might depend on the character of one man? What was it that gave him the strength to do the right thing when the temptation to do something less noble must have been overwhelming?

In acting as he did that day—and on other occasions when the siren call of power might have overwhelmed a lesser man—Washington “demonstrated that he was as immune to the seductions of dictatorial power as he was to smallpox.”

Most of us can hardly fathom just how unusual Washington’s decision was. In rejecting power, General Washington became the first famous military leader in the history of the world to win a war and then voluntarily step down instead of seizing and consolidating power. In fact, Washington’s sworn enemy, George III of England, could scarcely believe his ears when he heard what Washington had decided to do. If the leader of the army that had defeated the most powerful military force on earth had indeed stepped down, as was being reported, George III declared that man would be “the greatest man in the world.”

Whatever else historians say about Washington, all celebrate his willingness to set aside the chance of being crowned King George I of America in favor of going back to being a Virginia farmer. Nor was this a decision he made hastily. Washington had made clear, in the very first year of the conflict, that he was determined not to win the war against King George III only to set himself up as a rival American tyrant once he had won. In a speech to New York leaders, Washington announced that, in becoming a soldier, he “did not lay aside the Citizen”—that is, he recognized civilian authority over the military.

And yet Washington’s decision still amazes.

Excerpted with permission from 7 Men and 7 Women: And the Secret of Their Greatness by Eric Metaxas (Thomas Nelson, 2018). All rights reserved.

Washington could’ve been king, but his decision to decline power is a major reason we look back on him as a great man and great leader.  What “power” in your life do you feel entitled to, even in your everyday life? How can Washington’s example remind us that servanthood is the Christlike path to true greatness? We’d love to hear your thoughts in the comments!