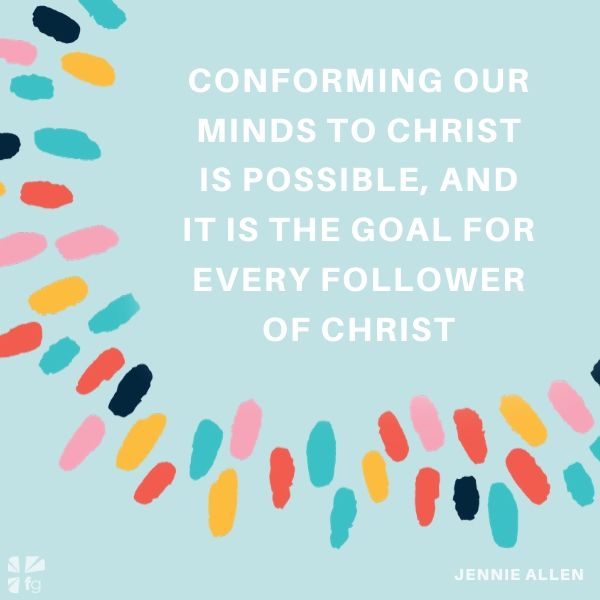 The first time I taught the study you’re about to dive into, I gathered a room full of women in my local church to talk about what’s going on in our heads. We met for six weeks, and lives were changed. The first night those women streamed into the chapel where we were meeting, they were greeted by a giant whiteboard on which was written the question, “What are you thinking about?” Attached to that board were dozens of brightly colored sticky notes with topics that might be taking up space in their thoughts, things like these:

Before the women in the Bible study took their seats, they were asked to identify a few of the thoughts that were true for them and peel off those sticky notes. It was a challenging task.

Despite dozens of positive options available on those sticky notes, guess which options got picked?

“Hiking” did get three takers, so at least there’s that.

Now, I’ve got to tell you, based on what these women indicated they were thinking about, I pretty much knew what assumptions they were making. Assumptions such as If people knew how badly I’d failed, they’d never love me and My worth comes from my ability to be perfect. No wonder I am not worthy of much.

From those beliefs, actions are taken: We will numb our pain. We will hide our fear. We will fake our happiness. We will “armor up.”

Those actions over time form habits, which craft the lifestyles that shape our days.

No wonder so many of us have trouble sticking to change! We fall prey to negative thinking and then wake up one day utterly defeated.

We Need a New Normal

The truth is, even if our minds are a mess, Jesus offers us that new normal. It’s a place where we know we’re fully loved, where we’re operating in our purpose, where we’re running free. Our minds are strong and clear. And that’s available to us as His followers — right now. But sometimes even if we know this truth, we don’t believe it. And our minds spin and spin, looking to land, and yet unsure if our mind stopping is even possible. Messages get mixed and it feels like we can’t quite put our feet back down on the simple truths of what it means to love Jesus and what it means to be loved by Jesus.

In these weeks together, studying the book of Philippians, we are going to remember, or perhaps discover for the first time, what it looks like to imitate Christ. What will become apparent is that the overflowing, contagious joy that comes from following the example of Jesus is directly connected to how we think.

In the pages of this short letter, the apostle Paul writes to the Philippian church to “have this mind among yourselves, which is yours in Christ Jesus.”

Paul is telling the believer that because of the indwelling of the Holy Spirit, we actually have the power to think Jesus-thoughts! Are you kidding me?!

There is no such thing as an insignificant thought. We are the product of hundreds, even thousands, of daily thoughts. However, if you dig under the thoughts of dry cleaning, spreadsheets, e-mails, or what you should eat for lunch, you will find some driving, consuming thoughts—thoughts that you attempt to keep tucked away, but the consuming thoughts remain. We serve a perfect God who is rightly jealous for His own glory. And if our thoughts shape our lives, no longer can we dismiss what we allow to bounce around in our minds. We have a very serious problem on our hands.

Realizing this, we can no longer casually dwell on fears… We obsess over idols.

We aren’t merely “distracted” with worry… We are fixated on not trusting God.

Welcome to what I believe to be the greatest war we may ever fight: the war in our minds.

Here we sit in a post-truth society bombarded with promises of happiness, wealth, fulfillment, and all our dreams met. Yet so many of us are miserably unhappy. Why?

Because for all the good that self-help does, that help always comes up short in the end.

The best that self-help can do with our suffering, with our shortcomings, with our spiraling is to reject it, to determine to do better, to declare, “Today this awfulness stops!”

But we don’t simply need our spiraling thoughts to stop; we need our minds to be redeemed.

C.S. Lewis wrote something I cannot quit thinking about because it dismisses the idea that God sent His Son to make us a better version of ourselves.

Mere improvement is not redemption, though redemption always improves people even here and now and will, in the end, improve them to a degree we cannot yet imagine. God became man to turn creatures into sons: not simply to produce better men of the old kind but to produce a new kind of man. It is not like teaching a horse to jump better and better but like turning a horse into a winged creature.1

This work we are going to do might be the most important thing we’ve ever done. But we don’t do it merely as another self- improvement project. I want to become the winged creature, the “new kind of man.” Don’t you? The one who sets her mind on Christ, better yet realizes she has already been given the mind of Christ, and therefore, is deeply and intrinsically motivated and moved by an entirely different source. Not only do I make Jesus happy, but I find my complete happiness in Him. These are truths that if we could only believe, would change everything.

WHAT IS AT STAKE?

It is possible to waste our lives if we never learn to take our thoughts captive. Your thoughts produce actions that echo out into eternity. If you shut down because of the noise in your head, untold generations of kingdom builders could be missed. The enemy of our souls knows this — and nothing would give him greater happiness than seeing us stuck, wasting, spinning, instead of growing and walking forward in God’s good purposes. This is how he operates. Your mind is the front line of this war. So don’t let anyone tell you that your thoughts don’t matter.

But taking every thought captive feels very difficult… so let’s start with taking one captive.

One little thought, that if you fully embrace it, will tip over like the first domino in a long line.

God gave you a choice. This one little thought could shift all the others. You get to interrupt the chaos and remember that you are “no longer a slave” (Galatians 4:7). You are free to live as a child and therefore an heir of God. And with that comes a lot of privilege and power. You get to decide moment by moment what you live for. And as heirs of God we get to live for Him!

You have a choice.

You are not a victim to your thoughts. 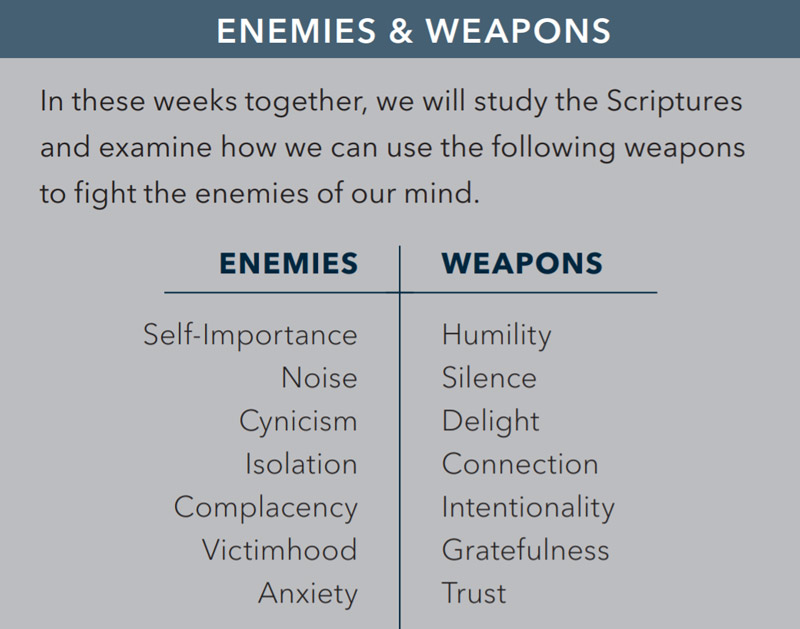 BACKGROUND ON THE BOOK OF PHILIPPIANS

We’re about to dive into the book of Philippians and see how Paul thought. Before we do, let’s explore Paul’s state of mind as he was writing to the church in Philippi.

ABOUT PAUL (THE AUTHOR)

THE CITY OF PHILIPPI

THE CHURCH IN PHILIPPI

In this study we are going to talk a lot about the way we think and the way God has called us to think. But we rarely stop and even think about our thinking. We begin by being aware of what we are thinking about, by starting with what is true. Evil never wants to be noticed, I should mention here. It sneaks in and hijacks our minds, and we barely notice anything’s amiss. So a vote for noticing. For thinking about what we’re thinking about.

Here is your chance.

As we begin on this journey together I want you to take ten minutes to reflect on your thoughts and answer a few questions.

Write down ten things you’ve spent the most time thinking about today.

Here’s an example of what one such mind map could look like: 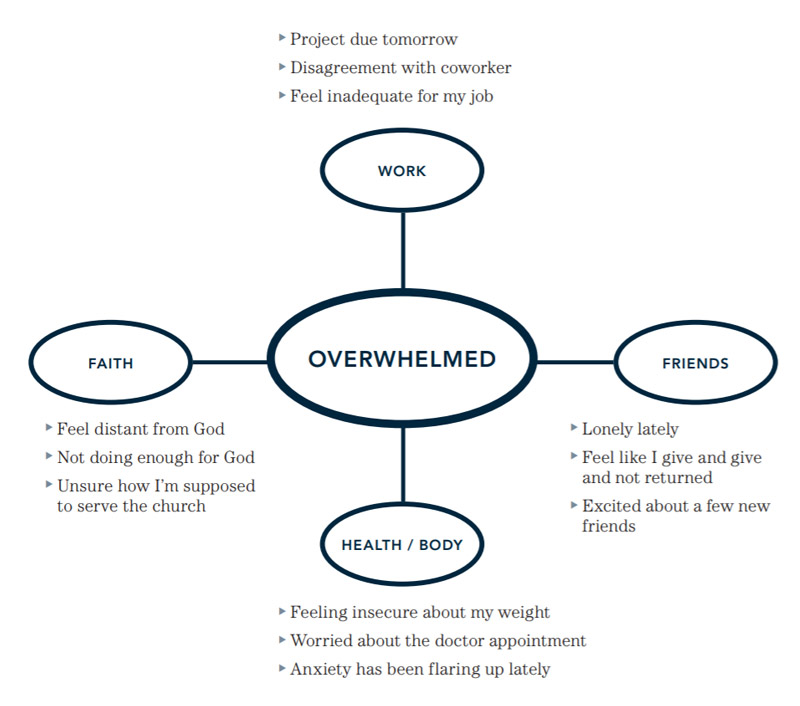 Talk to God about it. Pray with your map in front of you and talk through each thing you’ve written down. Tell Him about it. Ask Him to show you what you are believing wrongly about Him and yourself.

Ready to move on?

Look for patterns and common themes in your circles. Are you worrying about things you cannot control? Are you angry about how you’ve been wronged?
Are you obsessed with what you don’t have?

Has food, sex, entertainment, or money taken over your thoughts? Are you ashamed of what you’ve done in the past?
Are you self-critical?

Over the course of this study we are going to memorize one of the greatest passages in the Bible. No other passage lays out the gospel quite so beautifully and concisely.

Have this mind among yourselves, which is yours in Christ Jesus, who, though he was in the form of God, did not count equality with God a thing to be grasped, but emptied himself, by taking the form of a servant, being born in the likeness of men. And being found in human form, he humbled himself by becoming obedient to the point of death, even death on a cross. Therefore God has highly exalted him and bestowed on him the name that is above every name, so that at the name of Jesus every knee should bow, in heaven and on earth and under the earth, and every tongue confess that Jesus Christ is Lord, to the glory of God the Father.

Make a Scripture memory card with these verses on it and tape it on your mirror or anywhere else you’ll see regularly. Read it, say it out loud, and repeat it every day.

Excerpted with permission from Get Out of Your Head Study Guide: A Study in Philippians by Jennie Allen, copyright Jennie Allen.

We’d love to hear your thoughts on Get Out of Your Head in the blog comments!