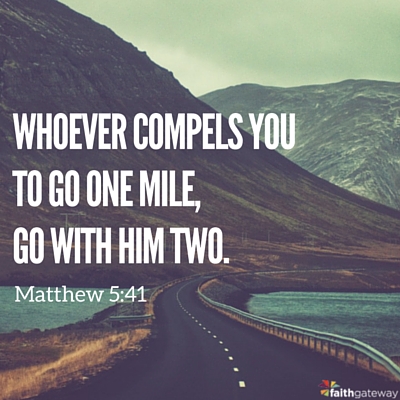 Whoever compels you to go one mile, go with him two. — Matthew 5:41

The phrase going the second mile has found its way into our modern vernacular. Its roots are found all the way back in first-century Palestine. The Romans had conquered most of the Mediterranean world. One of the marvels of their conquest was a vast system of super highways that they had built for travel to and from their conquered territories. There were more than fifty thousand miles of these Roman roads throughout the Empire. At each single mile was a stone marker. These mile markers pointed directions, determined the distance to the next town as well as to Rome itself, and warned of dangers that might lie ahead. Hence the common phrase “All roads lead to Rome.”

By law, a Roman citizen or soldier could compel a subject from one of the conquered lands to carry his backpack, or load, for him for one mile, but one mile only. As Jesus was preaching His Sermon on the Mount, I have often wondered if He inserted the reference about the second mile when He saw an object lesson unfolding before Him and His hearers. He said,

Whoever compels you to go one mile, go with him two.

Can you imagine the bombshell this must have been as it fell upon the ears of those under Roman occupation who were listening to His sermon? Jesus called upon His hearers to do what was required of them — and then some.

What is it that separates some from others in athletics or education or business or the arts, or in any endeavor? It is their drive to do more than is expected or required.

The second mile is a secret to success in life. [tweet this]

When focusing on the second mile, many forget there are two miles in play here. The first is a mandated mile; the second is a miracle mile.

There is a Mandated Mile Motivated By Law

The Christian life has its own mandated mile that is motivated by God’s law. It is tough to get started on the first mile. Ask any first-century Jew under Roman rule.  The first mile interrupts your schedule when you are compelled to perform it. It causes you to swallow your own pride and bear an extra burden. Likewise, often the most difficult part of the Christian life is getting started on the first mile. This is true with almost everything in life, with exercise programs, dieting, and scores of other disciplines. Even Scripture memorization! In fact, many try to play leapfrog with Matthew 5:41. That is, they want to enjoy the little extras of the second mile, but they do not want to deal with the requirements of the first mile.

There Is a Miracle Mile Motivated By Love

It is this miracle mile that separates certain individuals from others. The second mile is only made possible by being obedient to the first mile. The second mile has a way of brightening our own road. Think about it. Imagine a first-century boy working at his trade. A Roman soldier comes by, calls to him, and demands that he carry his backpack for one mile down the road. Now, this command interrupts the lad’s whole day and takes him away from his work. But he has no choice. However, this boy is a second miler. They approach the one-mile marker and instead of putting down the pack, spitting on the ground, and marching back home, he volunteers to go an extra mile with the soldier. Along the way, he pleasantly inquires about life in Rome. The soldier is baffled. I have often wondered if that Roman soldier at the cross who said, “Truly this was the Son of God,” had had such an experience earlier with a second-mile follower of Christ (Matthew 27:54).

This miracle mile, the second mile, is motivated by the love of Christ.

Incidentally, the second mile is the mile our Lord Himself walked. He knows the road very well. It was love that took Him on the miracle mile to the cross. Oh, He journeyed the first mile. He stepped out of heaven and into human flesh. He walked the mandated mile that was motivated by the law. He kept every detail of the law. But He also went the second mile, motivated by His own love for us. He who made the stars with a spoken word and formed the universe, the One who formed and fashioned us with His own hands, said, “I love you, and I will walk with you.” But we went our own way.

As you memorize this verse, meditate on what ways you can go the second mile today. It will brighten your road and lighten someone else’s load.

In what ways can you do more than what’s required of you, to go the second mile, the Miracle Mile, with someone else today? Come join the conversation on our blog! We want to hear from you! ~ Devotionals Daily